Governor(s) signs round of bills passed by state legislators

Through this week, Govs. Andrew Cuomo and Kathy Hochul had signed 428 bills passed during the 2021-22 legislative session, which began in January. Another 55 await Hochul’s signature. None has been vetoed.

On Aug. 2, Cuomo signed legislation introduced in the Assembly by Galef that prohibits homeowners’ associations from “unreasonably” restricting the installation of rooftop solar panels.

“Unreasonable” is defined as banning the panels from functioning at their maximum efficiency and charging fees that increase the cost of installation or maintenance by more than 10 percent. Associations can deny permission to install panels but must provide a detailed justification in writing. Similar legislation has passed in California, Arizona, Florida and Massachusetts.

On July 29, Cuomo signed legislation that prohibits school districts from taking parents or guardians to court over unpaid student lunch fees. It built on a 2018 directive that required districts to submit a plan to the state that would prohibit “meal shaming” tactics, such as making students with unpaid meal charges wear stickers, announcing their names over the loudspeaker or giving them an alternative lunch, such as a cold cheese sandwich.

On July 28, Cuomo signed legislation that allows victims of human trafficking to sue for damages up to 15 years — rather than 10 — after the crime. If a victim was a minor, the limit is 15 years from when he or she reaches the age of consent. Disability and other factors also can lengthen the limit.

Under the previous law, if a family that was owed child support could not be located, the state had to petition a judge to allow the money to be sent to a county treasurer. It had to remain there for five years before being turned over to the “unclaimed funds” department of the state comptroller.

Practically, this meant that it could take seven years or more for a record of the funds to be added to a public database. The new law allows the agency to skip family court and send the funds to the comptroller after two years.

On Aug. 13, Cuomo enacted the Housing Our Neighbors with Dignity Act, which creates a system in which the state can finance the purchase and/or conversion of distressed hotels and/or office space by nonprofits to create low-income housing.

On Aug. 20, Cuomo signed legislation regulating how banks bounce checks. If a bank receives a check for a greater amount than is in the account, it may decline payment. Under the previous law, the bank could also bounce subsequent smaller checks, even if there was enough money in the account because the larger check bounced.

On Sept. 11, Hochul added dispatchers to the legal definition of “first responder.” 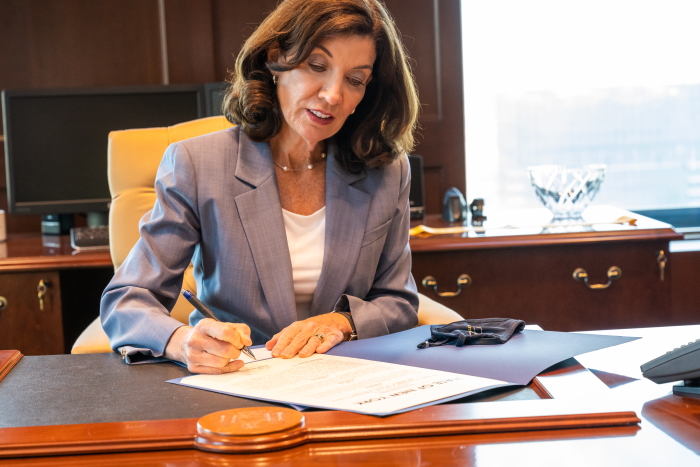 Gov. Kathy Hochul signs bills into law on Sept. 11, including one that added dispatchers to the legal definition of “first responder.” (Governor’s Office)

On Sept. 2, Hochul signed legislation that allows local and state legislatures to continue to meet by audio or video as along as the meetings are recorded and transcribed. Cuomo had issued an emergency order because of the pandemic shutdown that allowed remote public meetings, but it expired. This new law will expire Jan. 15. The New York Coalition for Open Government noted in its opposition that the law does not require public comments to be heard or meeting videos to be posted online.

Hochul on Sept. 6 signed legislation that makes contractors on construction projects liable for wages owed to the employees of subcontractors. The law also allows contractors to demand payroll information from subcontractors and withhold payment if it is not provided.

On Sept. 6, Hochul enacted legislation to test adding cameras to highway construction zones to record drivers who speed or violate other laws designed to protect workers.

This legislation, signed by Hochul on Sept. 6, changed the cap on “shared work” unemployment benefits from 26 consecutive weeks to 26 weeks. The program allows employees to receive partial benefits if their hours are reduced.

On July 30, Cuomo designated baseball as the official sport of the state of New York. This law was proposed by the fourth-grade class at the elementary school in Cooperstown, home of the Baseball Hall of Fame. The state sport joins the state beverage, fruit, reptile and snack. (Can you name them? See below.)

On June 2, Cuomo added “electronic messaging text” to the legal definition of telemarketing, effectively banning spam sent to cell phones owned by people who have opted out.

On Monday (Oct. 4), Hochul signed legislation establishing a program that allows the homeless, elderly and disabled who are receiving Supplemental Nutrition Assistance Program (SNAP) benefits to buy prepared food at participating restaurants and delis. If the plan is approved by the federal government, supporters say it will allow people who lack basic cooking facilities to receive hot meals.

On Thursday (Oct. 7), Hochul signed legislation that decriminalized the possession and sale of hypodermic needles and syringes to allow for “harm reduction approaches” for people suffering from addiction and reduce HIV and hepatitis transmission.