Republicans running for the Philipstown Town Board and the District 1 seat on the Putnam County Legislature failed to file mandatory campaign finance disclosure records due by Oct. 1, nor did they explain whether they obtained exemptions because their campaigns have raised or spent less than $1,000.

Searches this week of a state Board of Elections database turned up nothing from Barbara Scuccimarra, the GOP candidate for legislator, or Town Board candidates Neal Tomann and Sarina Tamagna. Nor was there anything submitted on their behalf by the Philipstown Republican Committee or the Putnam County Republican Committee.

None of the Republican candidates replied to inquiries this week about campaign finances. Anthony Scannapieco, the leader of the Putnam Republicans (and a county election commissioner), also did not respond.

In Cold Spring, the Better Together team — which includes mayoral candidate Vinny Tamagna and trustee candidates Cathryn Fadde, Jeffrey Phillips and Yaslyn Daniels — has nothing in the state campaign finance database. But Tamagna said each of its candidates applied for a waiver under a state election law permitting a candidate or committee in a town or village with a population of less than 10,000, such as Cold Spring or Philipstown, not to file if they do not raise or spend more than $1,000. 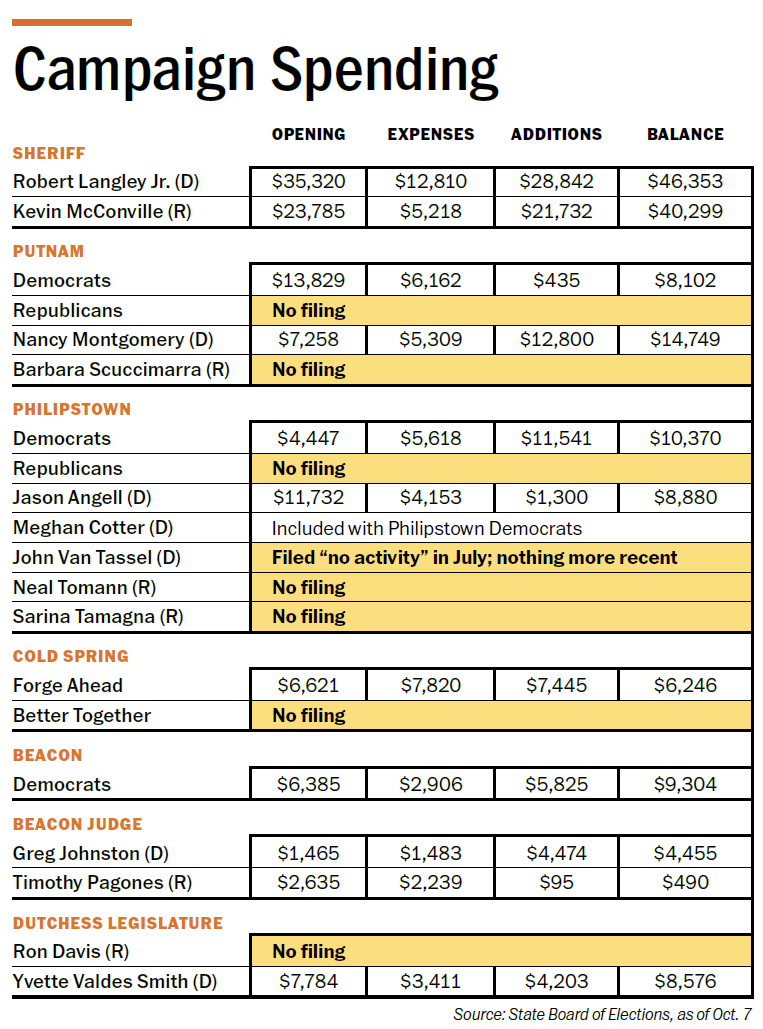 Tamagna said Thursday (Oct. 7) that while Better Together has purchased newspaper ads and produced campaign materials, “we are not doing anything glossy. Most of my stuff is done in-house and it would be absurd to spend more than $1,000 per candidate to reach 900 households. And none of us are taking any contributions.”

It was not immediately clear whether other local candidates or committees filed for exemptions; the state elections board said that information can only be released after a Freedom of Information Law request.

In Beacon, six Democrats are running unopposed for six open council seats. None filed individual reports but they were covered by a filing from the Beacon Democratic Committee. In the race for a Dutchess legislative seat that includes Ward 4 in Beacon, neither the campaign of Republican Ron Davis or any committee supporting him appears in the database. His Democratic opponent filed.

The forms due Oct. 1 were those required 32 days in advance of a general election. Candidates or their committees must file again on Oct. 22, or 11 days before the election.

HOW WE REPORT
The Current is a member of The Trust Project, a consortium of news outlets that has adopted standards to allow readers to more easily assess the credibility of their journalism. Our best practices, including our verification and correction policies, can be accessed here. Have a comment? A news tip? Spot an error? Email [email protected]ndscurrent.org.