The Haldane football team got a big performance from wide receiver and free safety Ryan Irwin during its homecoming game under the lights on Oct. 8 on its way to a 28-15 victory over Croton-Harmon. 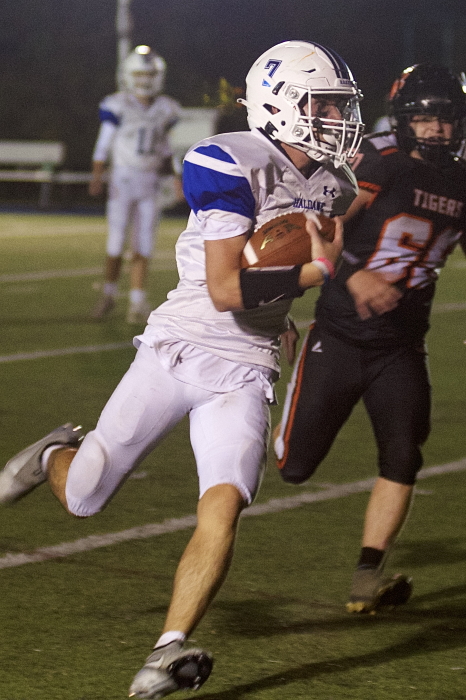 Ryan Irwin had two interceptions, returning one for a TD, ran for another score, and caught a TD pass. (Photo by S. Pearlman)

The senior came up with a pair of interceptions (returning one for a touchdown), caught a touchdown pass and ran for another score.

It was also a good night for the defense, which forced three turnovers and stifled the Tigers’ offense for most of the game. “Jake Mason continues to be all over the place with tackles,” the coach said.

McConville said he and the players were thrilled to play a night game on their home turf, which was illuminated by portable lights. “It took a village to get those light towers set up,” he said. “We got a lot of support from the booster club and the administration. The atmosphere was unbelievable.”

Haldane set the tone in the first quarter when a Soleil Gaines interception put the Blue Devils in business and quarterback Ryan Van Tassel connected with Irwin on a 43-yard touchdown pass. On Croton’s next possession, Irwin grabbed his first interception and returned it 65 yards for a 12-0 Haldane lead. 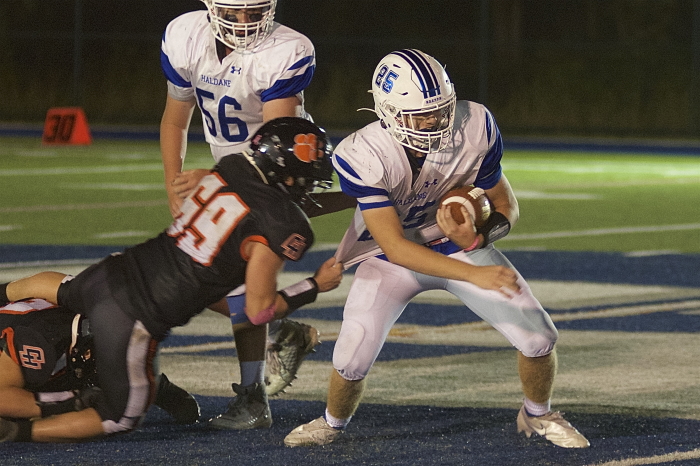 Running back Evan Giachinta gets held up by a defender during the Blue Devils win. (Photo by S. Pearlman)

The next scoring wouldn’t come until the fourth quarter, when Croton put together its best drive of the game and scored on a 30-yard run. But Haldane answered quickly, with Irwin capping a drive with a 16-yard run, then running for the two-point conversion to make it 20-7.

Tommy Tucker widened the lead on a 64-yard pass from Van Tassel and caught another pass for the two-point conversion. Croton got a 38-yard touchdown from John Cerrone to close out the scoring. 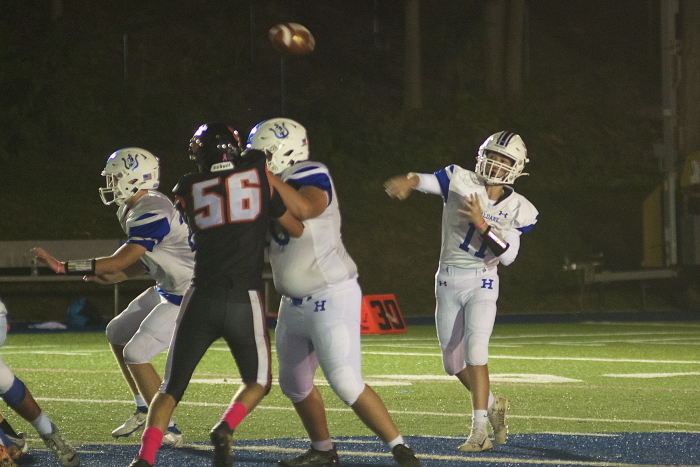 Van Tassel completed 7 of 13 attempts for 192 yards and two touchdowns. He was picked off once. Evan Giachinta ran 14 times for 54 yards.

The Blue Devils are scheduled to host Valhalla on Saturday (Oct. 16) at 3 p.m. in the first of what McConville called “a tough stretch of three games” that will also see the team travel to Blind Brook and Dobbs Ferry. “I’m glad we have some momentum. We’ve made some major improvements since the start of the season.”

Haldane’s Giancarlo Carone (8) heads down the sidelines against Croton-Harmon. (Photo by S. Pearlman)

Beacon hosted Wallkill on Oct. 8 and put the first points of the game on the scoreboard. But that was all the Bulldogs could muster, falling 28–3 in a performance that Coach Jim Phelan called “an embarrassment.”

After Owen Lynch kicked a 34-yard field goal in the first quarter, not much went right for the Bulldogs, who trailed 14-3 at the half and 21-3 at the end of three quarters. After a scuffle broke out on the field halfway through the fourth, the officials ended the game early. 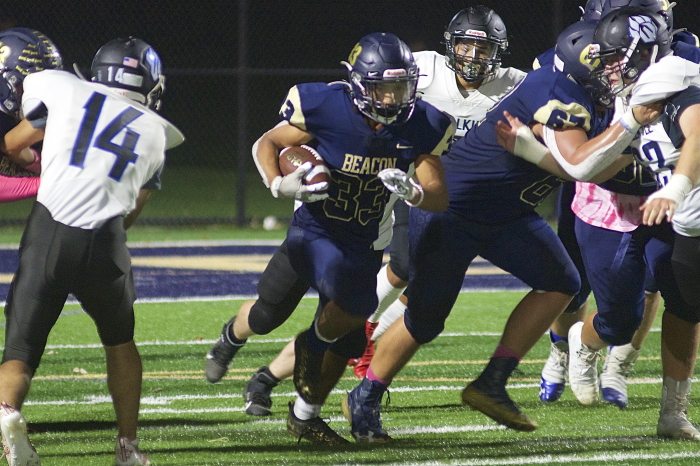 “We lost our mental focus during the game, and it cost us on many levels,” Phelan said. “We lost our heads, and we lost the game. They made some big plays when they needed to, and we did not. We also turned the ball over, and those turnovers got turned into points for them.”

Quarterback Jason Komisar completed 6 of 15 attempts for 100 yards but was intercepted and fumbled. He also ran seven times for 70 yards. Isaac Hanson added 56 yards on 10 carries, and Ahmir Bell had 14 yards on five. Cody Shields had two receptions for 56 yards, and Tyler Haydt led the defense with four tackles. 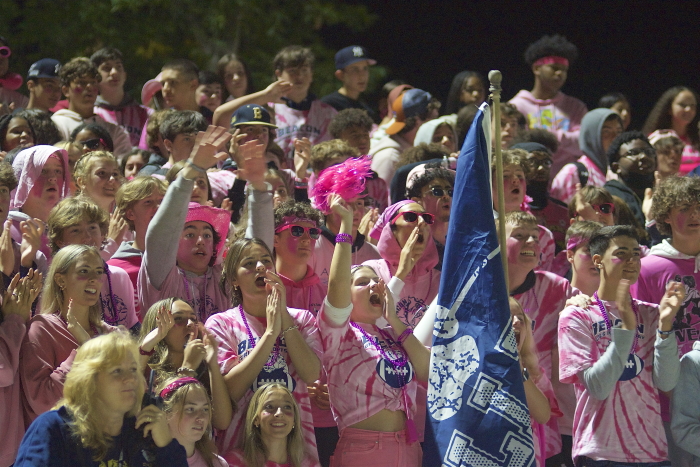 Beacon fans had something to cheer about early in the game on Friday, but the Bulldogs fell behind. (Photo by S. Pearlman)

Beacon had a touchdown called back on a penalty in the first quarter. “Essentially, that’s how our entire night went,” Phelan said. “Every time something good happened, we took two steps backward. We didn’t respond to adversity the way I had hoped we would. After winning our first three, it was heartbreaking to see. We didn’t play well, or represent ourselves well on or off the field.” 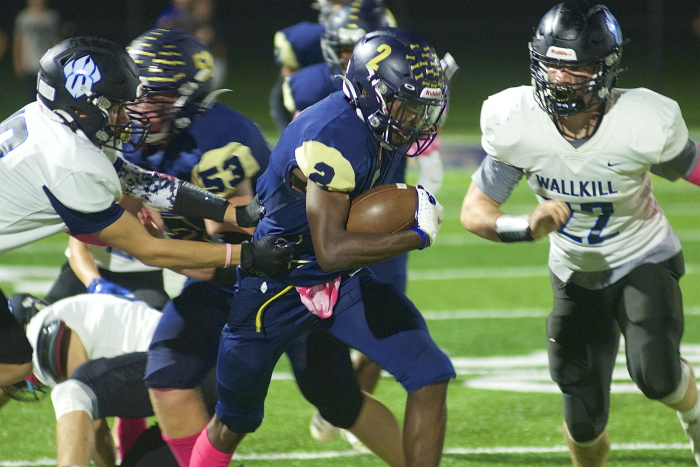 Phelan is hoping his team is ready to turn the page for the homecoming matchup tonight (Oct. 15) against 0-5 Monticello. Game time is 7 p.m. “It will be interesting to see how some of our young guys respond,” Phelan said. “This will be a good test.”

Beacon defeated Byram Hills, 2-0, on Monday (Oct. 11) in the Section I vs. Section IX Invitational at Lakeland High School. Andre Alzate scored both goals. On Tuesday the Bulldogs blanked Washingtonville, 2-0, behind scores by Tommy Franks and Dillon Kelly.

“That was a positive result against a traditional powerhouse,” Coach Craig Seaman said of the Byram Hills win. “The Washingtonville win was a good result in a difficult setting against a physical team on the road, on a small field with a choppy playing surface. It’s important that we’re able to adapt to different playing styles and fields.”

Beacon (9-1-1, 6-0-1 in league) was ranked No. 6 in Class A this week by the New York State Sportswriters Association. The Bulldogs are scheduled to host Washingtonville on Saturday (Oct. 16) at 2 p.m. and travel to Cornwall on Tuesday.

Haldane, on a four-game winning streak, defeated North Salem, 2-0, on Oct. 9 for a homecoming victory. The goals came from Matt Silhavy and Max Westphal, and keeper Ronan Kiter had six saves.

The Blue Devils (6-7-1, 3-2-1 league) picked up a 5-2 victory last week over Croton-Harmon. Ryan Eng-Wong and Silhavy each had two goals, and Westphal had one. Kiter had six saves.

“These young men are playing with a lot of heart and intensity every game,” said Coach Ahmed Dwidar.

The Blue Devils are scheduled to host Putnam Valley at 4:30 p.m. today (Oct. 15) in their last game of the regular season.

Beacon dropped a 2-0 decision on Monday (Oct. 11) at Millbrook. “We hadt a bad break in the first half when we had a penalty kick called against us, and that put us in a hole,” said Coach Hugo Alzate. “We moved the ball well but couldn’t finish.”

On Wednesday, the Bulldogs (5-4-3, 4-2-3 league) tied Washingtonville, 1-1, after two overtimes. Gabby Kuka scored for Beacon in the 74th minute to tie it, and Devyn Kelly had seven saves in goal.

“We had outstanding efforts from Gabby and Maddie Bobnick on defense, and Noelle Haase was an absolute monster on both sides of the ball,” Alzate said. “There are not many freshmen who can do what she can do.”

Beacon will host Minisink Valley today (Oct. 15) at 4:15 p.m. before traveling to Cornwall on Monday. The team hosts Goshen at 5 p.m. on Wednesday.

Haldane tied Arlington, 1-1, in an Oct. 8 homecoming game, lost to Croton-Harmon on Tuesday, 7-0, and fell at home to Putnam Valley on Thursday, 3-2, to fall to 5-8-2. It will close the regular season at Pawling on Saturday.

Beacon defeated Minisink Valley, 6-1, on Oct. 6, fell 7-0 to Washingtonville on Oct. 7 and swept a doubleheader from Cornwall (4-3, 4-3) on Oct. 8 to finish the season a 9-4 record. The Bulldogs tied Goshen for second place in the league, behind Washingtonville.

“The girls showed a ton of improvement, which was due to their great work ethic,” Coach David Ryley said. “Our JV finished the season undefeated, so the future is looking bright.”

On Tuesday (Oct. 12), Beacon entered two doubles teams in a Section IX qualifying tournament in Orange County. Maura Lane and Isabelle Ray will compete in the sectional tournament next week after reaching the quarterfinals (losing to the No. 1 seed from Monroe-Woodbury), while Emma Sandison and Lindsay Darcy lost in the round of 16 and did not advance. They finished the season 11-2.