Quick action by bank employees and local police recently thwarted attempts to fraudulently cash checks in Beacon and Cold Spring, according to Larry Burke, the officer-in-charge of the Cold Spring Police Department.

At the Tuesday (Oct. 12) meeting of the Cold Spring Village Board, Burke said a woman had walked into the M&T Bank in Beacon on Sept. 16 and attempted to cash a $7,500 check but was turned away because she lacked the proper identification.

The bank manager alerted his counterpart in Cold Spring; an hour later, the woman entered the M&T Bank there with the same check. The bank called 911, and Cold Spring and Putnam County sheriff’s officers responded. 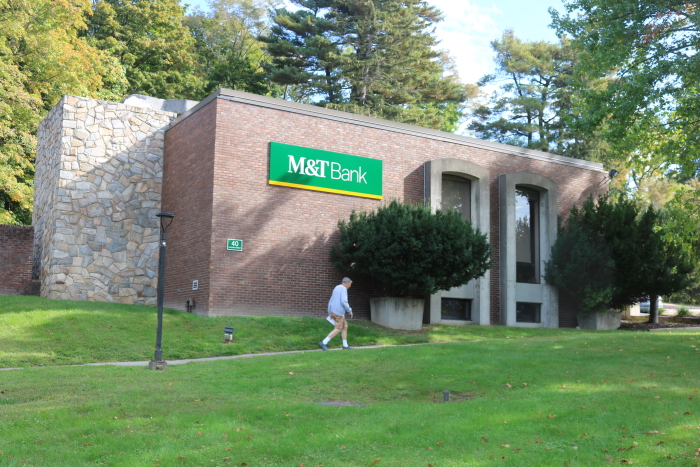 Burke said the suspect left the bank, crossed Chestnut Street and tried to evade police by going through the Foodtown parking lot. After her arrest, Burke said officers confiscated a fake ID, a small amount of crack cocaine and drug paraphernalia. The woman is wanted in Florida, North Carolina, Virginia and New Jersey, “all for the exact same thing,” he said.

In his monthly report, Burke said officers had answered 62 calls for service in September and issued 20 traffic tickets (including 10 for speeding) and 108 parking tickets. There was one arrest for the unlicensed operation of a vehicle.

By a 3-2 vote, the board approved the sale of a small strip of village-owned land on the north and west sides of Riverview to the restaurant’s owners, Jim and Lori Ely.

Mayor Dave Merandy called the sale a “no-brainer,” describing the land as “totally useless” to the village. Trustee Kathleen Foley said she was not opposed to the sale in principle but asked for clarification as to why a small piece of village property at 15 Main St. could not be sold to Laura Bergman, who is opening a wine bar.

Merandy said there were zoning and nonconformity issues at that site but that the biggest concern had been encroachment on the pedestrian right of way.

Foley commented that a previous board indicated village property shouldn’t be sold for the expansion of private enterprise.

Deputy Mayor Marie Early responded that the proposed sale would not expand Riverview’s business but would allow the restaurant to make tie-downs for a dining tent that sits on village-owned land.

When Foley pressed for information on the location of the tie-downs, a Highway Department fuel tank and other details, Merandy objected.

“I find this discussion crazy,” he said, noting that he, Early and Highway Crew Chief Robert Downey Jr. had visited the property.

“Where is the trust?” a clearly frustrated Merandy asked. “If you had gone there with [Trustee] Tweeps [Woods] and looked at it and said this land is useless, I would have said fine, because I trust you.”

“We’re talking about the sale of village property,” Foley said. “My questions haven’t been answered.” She asked Merandy why he was getting so emotional over the issue.

“This is a wasted discussion on a very minor issue,” Merandy said. “It’s a waste of my time. That’s why I’m emotional.”

Merandy, Early and Trustee Fran Murphy voted in favor of the sale, and Foley and Woods against.

The vote was the same on a motion to sell the land for $4 per square foot, the standard rate used in the sale of village-owned stoops and other small properties.

■ The board approved hiring Karen Herbert, a retired Westchester assistant district attorney, as a part-time secretary and assistant at a rate of $20 per hour.

■ After the receipt of two additional applications, a seven-member Community Stakeholders Group was approved. The group will provide comments and recommendations for an ongoing review of the Police Department.

■ The Planning Board is reviewing an application for a change of use from office to senior housing condominium for the yet-to-be completed Building 1 at the Butterflied redevelopment project. A revised site plan must also be approved.

■ Planning Board Chair Matt Francisco reported that the owner of the 6,564-square-foot space at 40 Main St., formerly the Ellen Hayden Gallery, has been advised to meet with the Village Board. The site’s proposed use would include two retail shops and office space for 29 people. That change would require 44 parking waivers, a number Francisco said is unprecedented. Because the number of off-street spaces required by the village code is seldom available, businesses can pay a one-time fee of $250 per space.

■ The Recreation Commission is developing a job description for a planner to oversee ticketed events at village parks.

■ The Highway Department collected 64 tons of trash and 18 tons of recyclables in September.