Beauty isn’t only in blooms

The ferns in my landscape start to glow at this time of year, even as they are lying lower than they did in summer. As in many disturbed areas, I have swaths of fern monocultures where they dominate and suppress other plants from growing. The majority are hay-scented ferns, (Dennstaedtia punctilobula), that are not picky about where they grow. They are very adaptable — equally at home in sunny, shady, dry or wet locations.

For most landscaping conditions there is a fern, and they can’t be beat for adding interesting foliage and texture. This non-flowering division of plants, the pteridophyte, is one of the oldest groups of plants on earth, although the earliest species are extinct. Most of our contemporary ferns only date back to the past 70 million years or so. The plant division includes all plants that reproduce by spores instead of flowers and seeds. 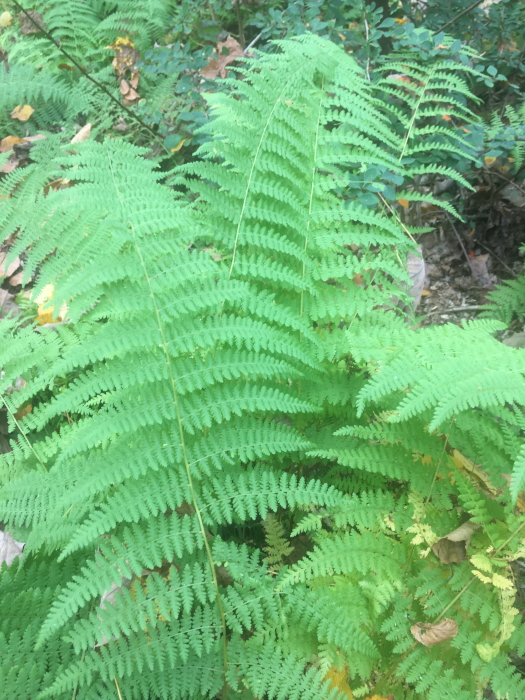 Hay-scented fern gets its common name from the faint wafting of fresh hay that comes up as you walk through it. (Photo by P. Doan)

I first appreciated the peculiarities of ferns in the yard of a house I rented in the Pacific Northwest, where the rainfall patterns and cloud cover create perfect conditions for many ferns. I learned to cut back dried foliage in winter so that I could witness the unfurling of new fronds in spring. Starting off as a fuzzy, brown clump, the fern would reveal itself as it unwound and became a dark-green stem, called a stipe, with delicate leaves, the pinna, branching off.

Use ferns creatively in mixed perennial plantings; shade gardens; rock gardens; plantings adjacent to a stream, pond or lake; or woodland-style gardens. During a hike or forest walk, look around for inspiration. Ferns show off in contrast to the bark of trees and rocks, and cast cool-looking shadows. Combine different ferns together that have varying shades of green, structure, height and leaflet size for impact.

The American Fern Society has detailed instructions on collecting and cultivating spores, something I don’t yet have experience with. The AFS also maintains a Facebook group for identifying ferns; it has international participation and a spore exchange for members in case you’re interested in cultivating ferns from other regions.

Here is a list of native ferns that I’ve been able to find at some local garden centers.

I especially appreciate how a grouping of maidenhair ferns looks like a swirling mass from above. This fern grows up to 20 inches high and has more of a circular form.

These are hardy in zones 2 to 6 and some of the Highlands will be too warm for it to be happy. Ostrich fern is commonly found in forested wetlands and can grow up to 6 feet tall.

For sun and shade with soil that doesn’t dry out

The trick to this grouping of ferns is to find the sweet spot between more moisture in sunny spots and more dryness in shady spots.

I love the lacy, delicate leaf cuts of this fern. The texture and bright, green color pop when I see it growing in the woods.

Reaching up to 3 feet in height, the sensitive fern has large segmented leaves and is pale green.

Cinnamon fern (Osmunda cinnamomea)
This fern can be found growing in high sediment areas of streams or on pond edges, but will also tolerate dryer soils as long as it is shady. Growing up to 6 feet tall, it has a striking presence.

Christmas fern (Polystichum acrostichodes)
This is an evergreen fern that grows up to 2 feet tall with large foliage and gets its common name from being identifiable in winter. With its height, it could stand in for woody evergreen plants in a garden.

New York fern (Theylpteris noveboracensis)
I have a difficult time distinguishing New York fern and hay-scented fern because they have a similar bright-green color, branching structure and height of 1 to 2 feet. They are similar enough that I wouldn’t plant them in the same grouping, but if you can only find one of the two, use them interchangeably.

As previously mentioned, for dry or wetter conditions in sun or shade, plant hay-scented fern. Be aware that over time, it can become the dominant plant in its location.

One thought on “Roots and Shoots: Matters of Texture and Shape”