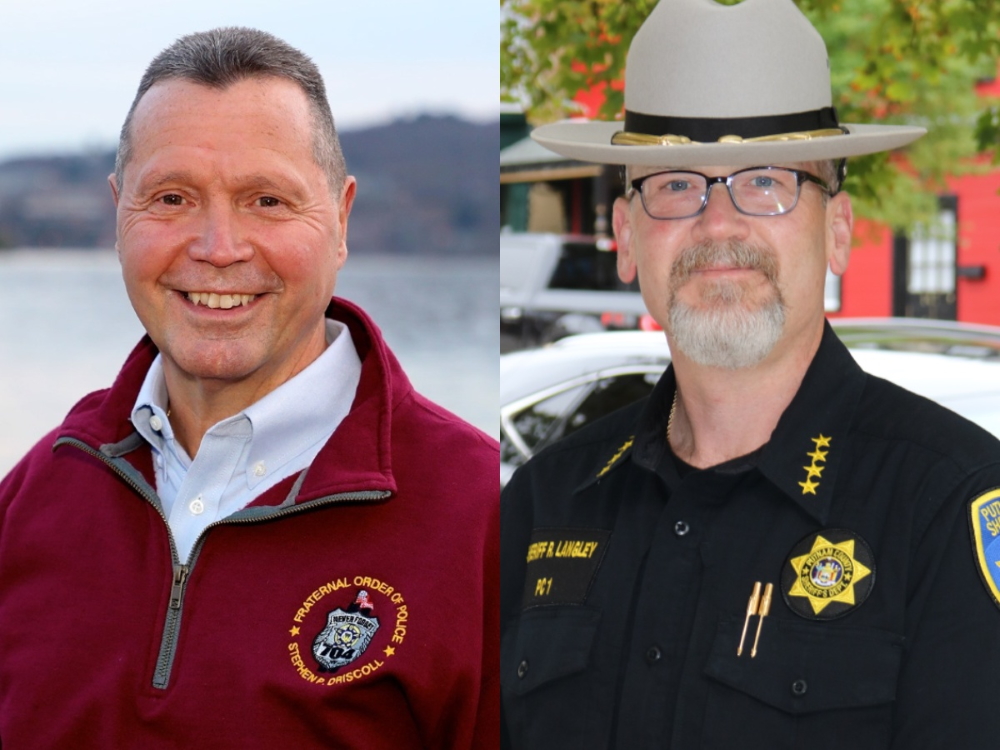 McConville, a Republican, called on the county district attorney and state attorney general to investigate Langley, a Democrat in his first term, for allegedly committing four misdemeanors — including “official misconduct” — by discussing his reelection campaign with a town supervisor while on duty and during a call made with his county-issued phone.

The allegations arose from a conversation on Aug. 30 between Langley and Carmel Town Supervisor Ken Schmitt, who has served seven terms but lost in the Republican primary in June.

A recording appeared on Sept. 29 on a Facebook page, the Putnam County Watchdog Report, which said it was obtained “as part of a series of sweeping FOIL [Freedom of Information Law] requests.” McConville charged that the sheriff tipped off his supporters about the call.

The FOIL request, which The Current obtained through a FOIL request, was made by Erin Crowley, who ran as a Republican for the Carmel Town Council this year but finished third in a four-person primary; she requested “all phone conversations between Sheriff Langley and Carmel supervisor Schmitt from 8/30 to 9/8/2021.” According to financial disclosure records, she has donated $1,690 to the sheriff’s campaign.

At the beginning of the call, which lasted 18 minutes and 40 seconds, Schmitt told Langley: “I’m very confident you’re going to win reelection. I believe that the voters see that you know how you’ve been working, that you’ve been doing a great job, and that you have everybody’s best interests at heart.”

He added: “If the voters didn’t support you, it would be doing an injustice to the county…. I’m not going to be doing anything for the McConville campaign at all. There’s reasons why I’m not. But I’m letting you know that I’m out, as far as, you know, helping Kevin do anything at all.”

What was said? Read a transcript of the call.

Schmitt expressed bitterness that he had been challenged in the Republican primary by a former Carmel police chief who won 65 percent of the vote, and described being asked by McConville to join his campaign committee, only to be shunned after he lost the primary. He also suggested that after his term in Carmel ends Dec. 31, “there’ll be something for me” and that he might even “come up and work for the Langley administration.”

Once the recording became public, Schmitt changed his mind and endorsed McConville, posting a photo on his personal Facebook page showing him shaking McConville’s hand. 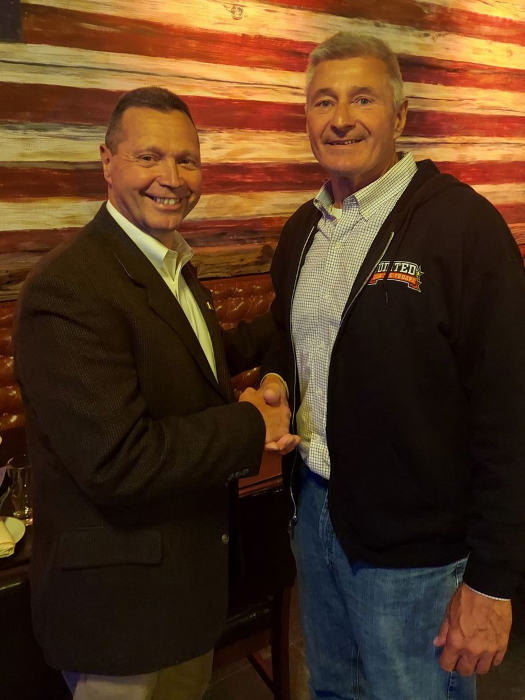 On Sept. 29, Carmel supervisor Ken Schmitt posted a photo of himself on Facebook with McConville, offering his endorsement.

In a phone interview on Wednesday (Oct. 20), Schmitt attributed his 180-degree turn to what he considers Langley’s involvement in disseminating the recording.

“It was the act of releasing the conversation,” he said. “That’s where the problem lies, not in the conversation [itself].” He said Langley should have talked to him on a personal cellphone, not a county-provided one on which calls are recorded, or shut down the discussion when politics came up.

“The conversation was 100 percent political,” Schmitt asserted. “My support of the sheriff has ended, because what he did is despicable, underhanded and something that never should have happened. My support is completely behind Kevin McConville. He’s a man of integrity, of honor, of dignity. He’s a man you can respect. And you can trust him.”

In a news release and campaign event Oct. 15 at the historic Old Putnam County Courthouse in Carmel, McConville characterized the Schmitt-Langley exchange as “entirely political in nature” and “a discussion of the election for sheriff, political support, and potential employment as a reward for political support.”

During the call, Langley did not respond to Schmitt’s speculation about a future job in the Sheriff’s Department.

On Oct. 16, Langley posted the audio recording on his campaign’s Facebook page. In a statement, he said he wanted to “clear the air” about the conversation, dismissing McConville’s descriptions of the call as a “hyperbolic and false characterization” and declaring that “there was no violation of public trust and no unethical conduct.” 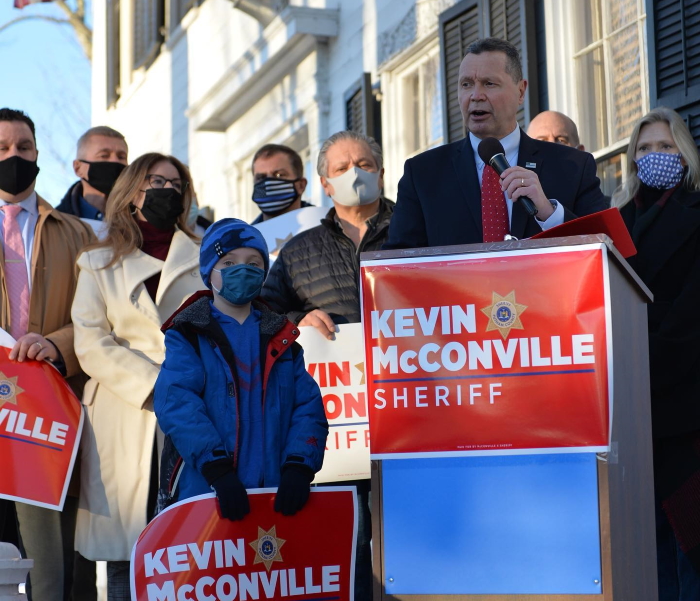 Kevin McConville announced his campaign for sheriff on Feb. 4 on the steps of the Putnam County Historic Courthouse in Carmel. The county clerk, county executive and Republican members of the Legislature stand behind him. (Campaign photo)

The sheriff had phoned Schmitt after he was told the supervisor wanted to talk to him. “I was not informed of the reason for the request and I had no idea what the purpose of the call was,” Langley said in his statement. “I have known Mr. Schmitt for many years in a professional capacity and I assumed that the requested phone call was for a professional purpose.”

He added: “Although some politics were discussed, the nature of the call was not ‘political in nature,’ in my mind.”

McConville on Sept. 30 compared the phone conversation to Watergate and alleged it was “so unethical it would make President Nixon and former FBI Director J. Edgar Hoover blush.”

“The citizens need to know why the chief law enforcement officer of Putnam County is secretly recording and releasing taped conversations with their elected officials,” he argued.

New York State law permits phone calls to be recorded by one party without the consent of the other. In his statement, Langley said all calls made on his county-issued phone, with some exceptions, are recorded by the Sheriff’s Department, and that recording calls is a standard practice for police departments. Both McConville and Schmitt, a former Carmel police officer, should have been aware of that, he said.

By releasing the recording under FOIL, McConville said, the Sheriff’s Department acknowledged the conversation “was an official government record of the Sheriff’s Office, and not a personal phone call,” and that Langley spoke with Schmitt “to gather campaign material.”

McConville called on Putnam County and state prosecutors to investigate Langley for crimes that included “conspiring to promote or prevent the election of any person to a public office by unlawful means.”

Robert Tendy, the Putnam County district attorney, a Republican like McConville, did not respond to a request for comment.

Langley said in his statement that he plays no role in FOIL releases and that the recording was not posted by “political operatives” because he does not have any. “I have a family, a job and a small group of grassroots volunteers, friends and supporters,” he wrote. “Only those who are constantly campaigning for someone else’s job have political operatives.”

On Oct. 16, on his campaign Facebook page, the sheriff attempted to turn the conversation back to McConville, writing: “It would seem some people are trying to make something out of nothing with standard operating procedures and legally required responses under FOIL requests. There was nothing nefarious…. Perhaps the question that should be asked is: ‘Why won’t Kevin McConville sign a release to the nondisclosure agreement in a lawsuit resulting from his personal misconduct with MTA employees?’ Asking for a friend.”

In August 2015, the MTA paid $1.2 million to settle a 2007 lawsuit brought by 10 black and Hispanic officers who said they had been subjected to racial discrimination.

The lawsuit named the agency, its directors, McConville and his top deputy. With the settlement, the MTA admitted no wrongdoing; the plaintiffs were required to sign nondisclosure agreements. McConville left the MTA in 2008 before spending 12 years as the director of security for NewYork-Presbyterian Hudson Valley Hospital.