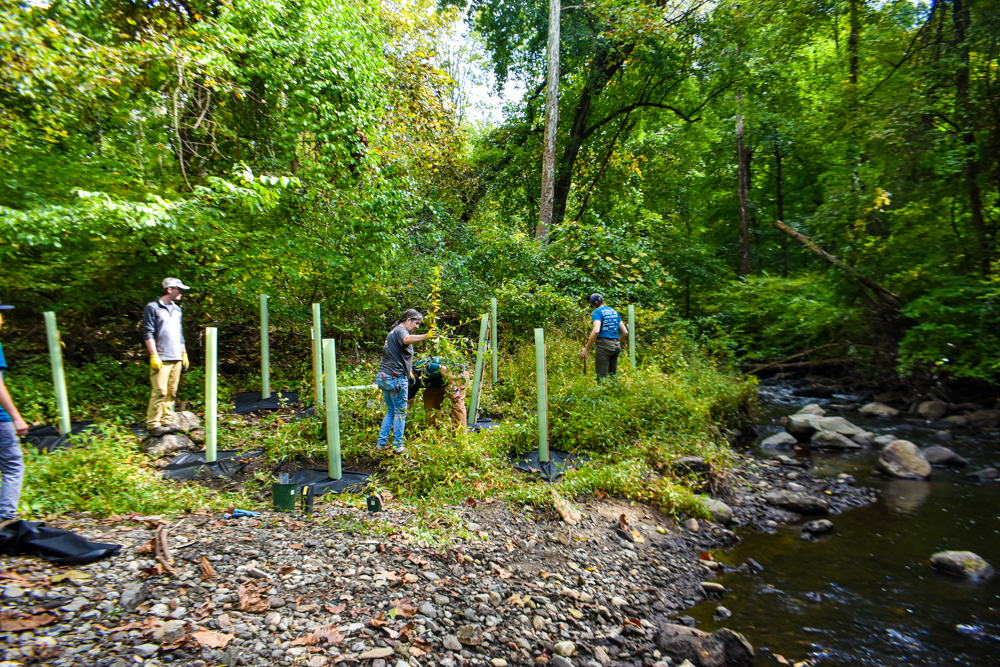 Volunteers plant swamp rose, silky dogwood, river birch and black willow along the new banks of the creek. (Photos by B. Cronin)

The aftereffects of dam removal

You can learn a lot from an empty freshwater mussel shell by the side of a creek.

For one thing, as George Jackman, senior habitat restoration manager for Riverkeeper explains, it’s a sign that the water quality is good. Each mussel can filter up to 25 gallons of water a day.

Second, it’s a sign of a vital aquatic ecosystem. Mussels are sedentary during their adult life; after they’re born, they attach themselves to eels, harmlessly riding along until dropping off when they find a spot to call home. When you see a mussel, you know that an eel has been there, as well.

And third, since the shell is empty here on the side of the Furnace Brook in Cortlandt’s Oscawana Park, it means that raccoons have come to the creek to find food.

“What we have now is an integrated habitat,” said Jackman. “That’s what we want.” 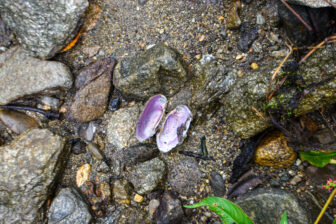 A freshwater mussel shell, one indicator of a healthy ecosystem

Last November, Riverkeeper removed a 5-foot-high, 75-foot-wide colonial-era dam from this spot in hopes that this thing would happen: Migratory routes for eels and fish would be restored. Since then the stream, following the path of least resistance, has cut a new route.

“It’s moved 50 feet that way,” said Jackman, pointing toward the road. “Not only are the fish migrating now, the stream is migrating, too. Streams curve and bend when they’re no longer under the dominion of humans. We’re allowing it to act like a stream again.”

The spot where Jackman stood was water last year at this time. “This is new land,” he said from atop the infill. 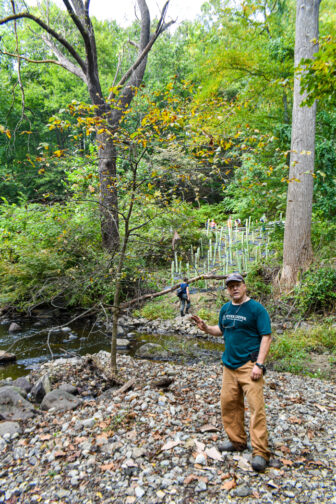 George Jackman takes a break by “the happy tree.” The slope in the background shows where trees were planted to cover the path of the dam removal equipment.

Next to Jackman was a young elm tree that last year was a sapling on a minuscule island in the creek. Jackman said it was a “one-in-a-million” chance that the tree had come to grow on that spot, so when the dam was being removed they made sure not to damage it. Now, the island has become a peninsula and the tree has grown considerably.

“We call this the happy tree,” said Jackman.

He also pointed out a sycamore, more than 200 years old, which had been forced to form itself around the dam as it grew. With the dam removed, the underside of the tree was revealed. “This tree has stood sentinel for as long as that dam had been here,” Jackman said. “It’s a survivor.” 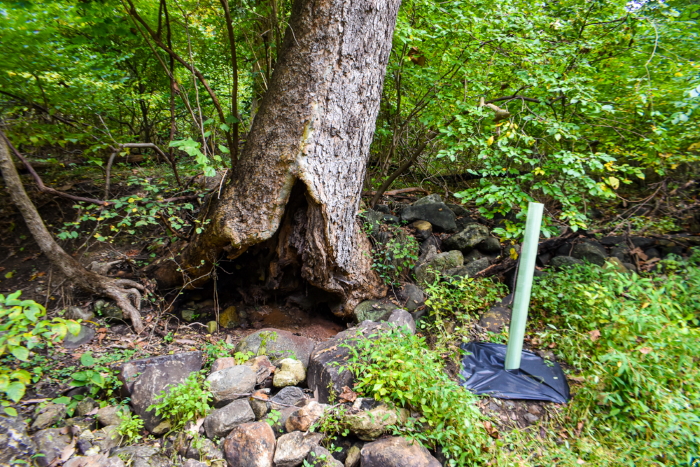 A two-century-old sycamore was forced to form itself around the dam. (Photo by B. Cronin)

Now that the creek had chosen its new path, Riverkeeper volunteers returned to the site to stabilize the new banks by planting swamp rose, silky dogwood, river birch and black willow. The shade from their branches will help lower the warming water temperatures to make the creek more habitable for native trout. Keeping the water cool and flowing will also reduce the formation of harmful algal blooms, such as the one that recently took over Beacon’s Melzingah Reservoir.

On the slopes of the road, where a path had to be cleared for the dam removal equipment, volunteers planted white oak, red maple and white pine. Jackman likened it to surgery. “We had to make a slice to get the equipment in to get the dam removed,” he said. “Now we’ve cleared the blockage, like a blocked artery, so we’re suturing it up over there.” Five years from now, Jackman said, drivers passing by on Cortlandt Street won’t notice anything out of the ordinary.

The Furnace Brook dam is the third structure that has been removed from this waterway in the past two years, with the other two downstream. First to go was the remnants of a dam that was breached in 1999 by Hurricane Floyd, followed by the rubble from a collapsed bridge. Next year, Westchester County plans to remove the Maiden Lane dam upstream.

Since the Furnace Brook dam has been removed, Jackman has seen creek chubs and blue crabs here for the first time, in addition to the mussels and the eels that they’ve hitched a ride on.

It’s not known what or where the furnace was that gave Furnace Brook its name, but it is known that before the settlers came, Native Americans called it Jamawissa Creek, which means “place of small beaver.” Jackman said that the county plans to change the name of the creek back to Jamawissa once the Maiden Lane dam comes down next year and the waterway is clear.