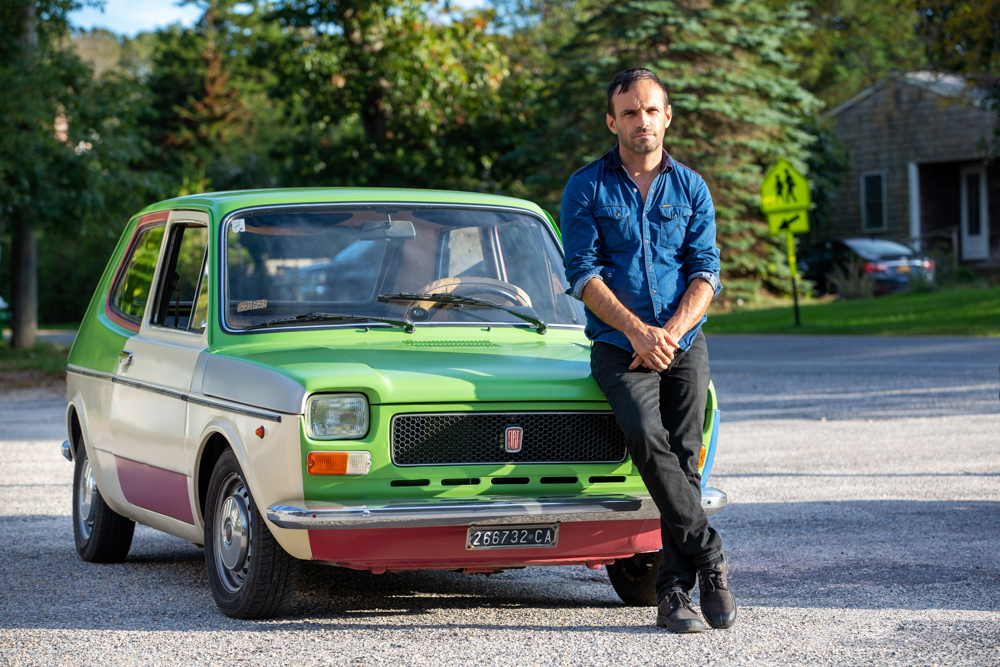 An art critic I am not. As with wine, I know what I like, but it’s purely my opinion, and in both cases, based on deficient knowledge. I tend to laugh at, and can never taste, the “hints of whatever” described on a wine label. With art, I should be banned from any discussion of its meaning or significance. The “Mona Lisa”? To quote John McEnroe, “You cannot be serious!” What a letdown when I finally saw Mona’s smirk in person.

Long ago, I decided art is simply what artists do. I tend to avoid contemporary art. I got in trouble at the Guggenheim Museum in New York City when I sat on a sculpture. Why would any artist make a sculpture look like a bench?

I have no idea what inspired me to attempt to replace Alison Rooney, our arts editor, who was on vacation. It might have been the “paint-by-number” piece I’ve been working on for a year.

So, I took Alison’s seat on The New York Drive with Cristian Chironi, an artist from Orani, Sardinia, also the birthplace of Costantino Nivola (1911-1988), whose sandcast works are featured at Magazzino Italian Art just outside Cold Spring.

The New York Drive is a tribute to him, a performance by Chironi, in which he chauffeured residents of three New York communities in an old Fiat 127, the same model used by Nivola.

On Sunday morning, the drive headed out from Cold Spring’s bandstand. In the car were an artist, a lawyer, a real estate agent and a reporter. Sounds like the start of a bad joke.

Originally assigned as co-pilot for the artist-chauffeur, I was disappointed to be relegated to the back seat. My 6-foot, anything-but-skinny frame made that a bit of a challenge. 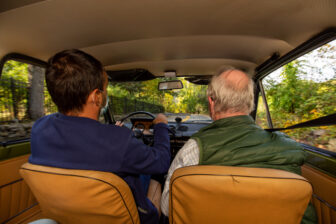 Passengers found themselves in tight quarters during the tours.

We drove up Main Street, south on Route 9D to Garrison and back. That was it. Performance done. The “Mona Lisa” popped into my head.

When asked at our weekly editorial meeting what the performance was like, without a second thought I blurted out, “It was pretty dumb.”

That’s when our editor, Chip Rowe, quipped, “So, you have to write about it, Mike.” And that’s what gives editors a bad name.

Now I had to actually think about the drive. And the more I thought about it, the more I realized it was not dumb at all. I actually enjoyed it.

The crazily painted 1971 Fiat 127 Special was great. Even greater is what Chironi named it, “Chameleon.” Greater yet was my realization that the last time I rode in a 1971 Fiat was that year in Rome (Italy, not New York) in what remains my most terrifying taxi ride ever. On Sunday, Chironi helped me purge my Fiat phobia.

As we drove up Main Street in Cold Spring, heads turned and people gawked at Chameleon. That was neat. I hadn’t been stared at that much since owning an AMC Pacer in the mid-’70s. I even gave the royal wave to a few gawkers. It felt regal. 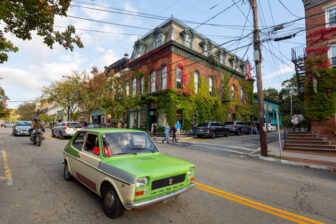 Chameleon has a stick shift on the floor. Man, how I wanted to shove Cristian aside and rip through those gears. A good, though fleeting, fantasy.

The Fiat didn’t exactly rip down Route 9D; it might have hit 29 mph. Cars passed us on the double line. I didn’t utter what I usually say aloud when that happens and I’m driving alone. Being passed that way did, however, send a surge of adrenalin through me. As did the bizarre U-turn Cristian made in the middle of the Route 403 intersection. The lack of seatbelts in the historic vehicle added to the thrill. For just a second, I wondered if Cristian was my taxi driver in Rome 50 years ago. I’m sure he isn’t old enough.

On the return trip I noticed Cristian’s support team stationed along 9D, shooting photos and video as we drove by. My first role in performance art was being recorded for posterity; I was actually in a work of art!

My mind jumped to an episode of Rod Serling’s Night Gallery, in which the main character wished himself into a painting – but he couldn’t get out of it. I was now in a work of art; what if I can’t get out of the car at the end of the drive? Could I be happy living in a Fiat? It did have a good sound system. 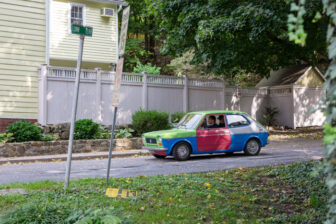 I was able to pry myself out of Chameleon’s back seat, albeit slowly and anything but gracefully. My painful exit was not caught on camera.

So, what wisdom have I attained by participating in The New York Drive?

I’ve dropped “dumb” from my vocabulary when considering art. I learned performance art can be fun, even funny. I’m now aware art isn’t just what artists do. It can be an experience, one that can get even better if left to simmer in a participant’s mind for a few days.

The best thing I’ve gained is awareness of two very interesting artists, creative men I had not even heard of before.

Google both of them. Visit Magazzino Italian Art, as I did, to view Nivola’s sandcasts. They are unique and brilliant.

I Googled the “Mona Lisa” for the first time in years. I swear that smirk is now a smile.

In an earlier version of this article, we reported that the late artist Costantino Nivola “was renowned for bombing around eastern Long Island in a multi-colored Fiat.” In fact, near the end of his life in the 1980s, when Nivola was living on Long Island, he was concerned that artwork he had left in his home in Tuscany would not make it back to his birthplace in Sardinia. So he enlisted a nephew to move the items using Nivola’s Fiat 127.

One thought on “Reporters’ Notebook: The Art of Experience”