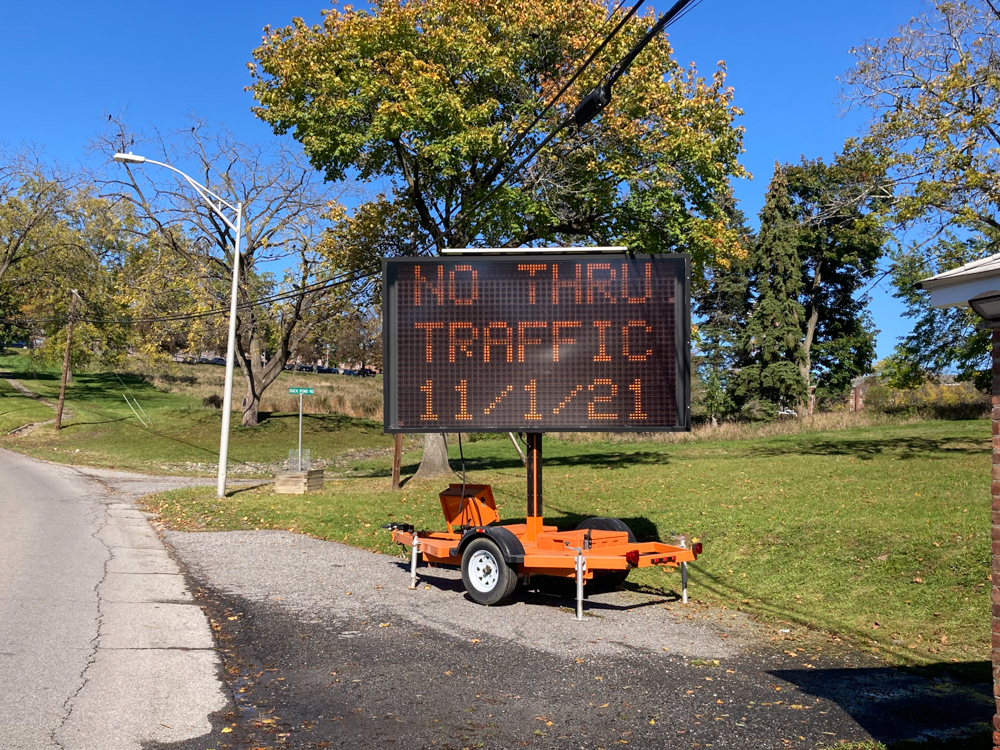 A sign placed along Matteawan Road announces it will close to most vehicles as of Monday. (Photo by J. Simms)

The Fishkill Correctional Facility is planning to permanently close a portion of Matteawan Road in Beacon on Monday (Nov. 1), eliminating a cut-through used by hundreds of people each day.

A state Department of Corrections and Community Supervision representative said on Thursday (Oct. 28) that the closure is due to ongoing security concerns.

The road runs past Rombout Middle School and Beacon High School before entering the medium-security prison property and curving to the right, eventually ending at Route 52/Fishkill Avenue, where it becomes Prospect Street.

Although primarily an access road, it has become a much more heavily trafficked thoroughfare for school buses, parents and students coming from the Town of Fishkill and the northern part of Beacon since the school district opened its new high school campus in 2002.

In 2015, security posts where Matteawan enters the prison property were also closed as a cost-cutting measure.

With traffic on the west side of Beacon already feeling the impact of construction on the Newburgh-Beacon Bridge, the closure of Matteawan once it enters prison property would force cars coming from north of Interstate 84 to take Route 9D to get to the schools, increasing traffic on Verplanck Avenue, which connects 9D with the southern end of Matteawan.

On Beacon’s east side, cars coming down Route 52 would likely cut over to the schools via Wilkes Street, a narrow residential road running alongside Memorial Park and a pedestrian path that bikers and walkers already use daily.

The state prisons representative said on Thursday that Matteawan will remain open to emergency response vehicles such as police, fire and EMS and that buses will be permitted to continue traveling through the prison to reach the schools, with procedures in place to ensure students’ safety in the event of a breakdown on facility property.

Matt Landahl, the superintendent of the Beacon school district, said he was given little advance notice of the closure.

“We heard a rumor about it over the weekend of the 16th and 17th” of October, he said. “People were coming up to me at the [high school] football game and asking if I knew about it.”

Landahl said he emailed prison officials, who called him on Oct. 18 to confirm the closure. Since then, the prison has said it will allow buses to use the route, but not cars, Landahl told the school board during its Wednesday meeting.

“This still is only a partial solution, and I’m not even sure if it’s meeting us halfway,” Board President Meredith Heuer remarked.

A more important issue, said Board Member Elissa Betterbid, is emergency access should the schools ever have to be evacuated. “It essentially cuts our two biggest campuses  down to one-way-in, one-way-out,” she said. It would help if the prison “could give us some more time, so we could at least have an emergency protocol in place.”

“I can just imagine the horror” if the schools needed to evacuate, with students, parents and emergency vehicles clogging the same roadway, Betterbid said.

Heuer said the board planned to send a letter to prison officials today (Oct. 29) to ask for more time.

The school district and the Beacon City Council also reached out to state Assembly Member Jonathan Jacobson, whose district includes the city. He said Wednesday that he has initiated discussions with all of the parties.

“It is not unreasonable to have school buses and emergency vehicles use the road,” he said. “This limited use will not affect the safety of the public or the operation of Fishkill Correctional Facility.”

The City Council is expected to approve a resolution on Monday urging the agency to reconsider, or at least delay, implementation and “begin a real dialogue” with the city, the Town of Fishkill and the school district, City Administrator Chris White said.

The city “strongly recognizes [the prison’s] right and necessity to secure their facility — nobody is questioning that,” White said during the council’s Oct. 25 workshop. “The way that they do it, though, is important. We think we can thread that needle so it’s not as disruptive to the traffic going to Rombout [Middle School] and the high school.”

The city also received notification on Oct. 18 about the closure, less than two weeks in advance, and without the benefit of any traffic modeling to study its impact, he said.

Mayor Lee Kyriacou suggested that if there’s time, the municipalities and the prison could investigate creating “straight-shot” access for vehicles near the flashing yellow “dummy light” on Route 52, which could lead to Rombout and the high school without passing by prison housing.