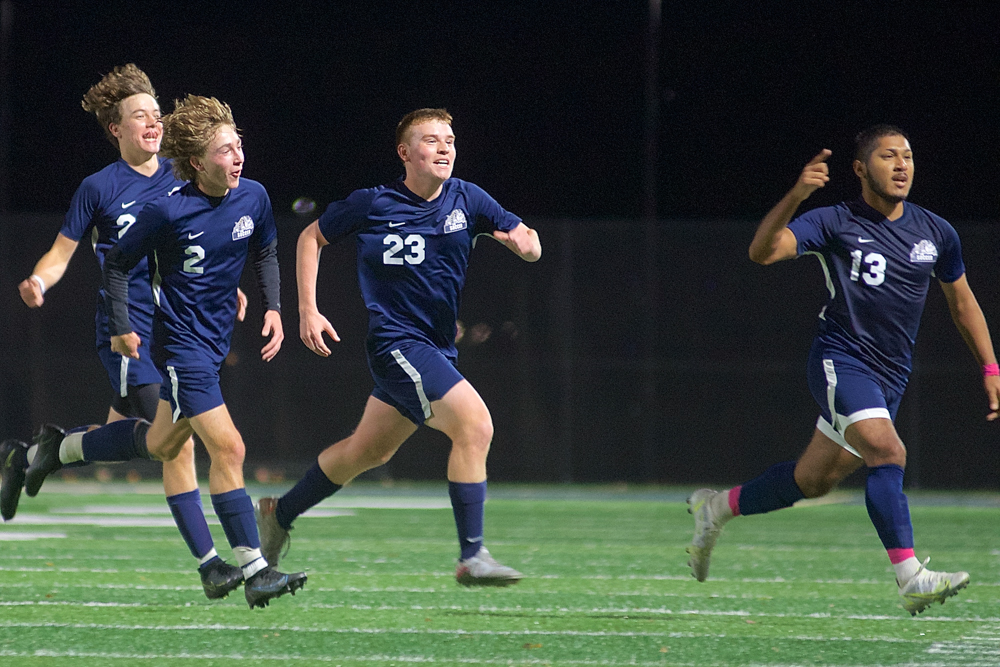 The Bulldogs celebrate a goal by Miguel Ruiz (13) against Wallkill in the Section IX semifinals. (Photos by S. Pearlman)

The No. 1-seeded Beacon team (17-1-1) defeated No. 2 Roosevelt High School, 5-1, on Thursday night (Oct. 28) at Middletown High School to win the Section IX, Class A title — the team’s first sectional title in school history. The Bulldogs’ only loss this year was in its first game, against John Jay East Fishkill.

The Bulldogs advance to the regional tournament at 4 p.m. on Wednesday (Nov. 3)  against the Section I, Class A champ (Somers or Eastchester) at Middletown High School.

The last time Beacon reached the sectional championship game was 1989, when Coach Craig Seaman was a player on the team. The Bulldogs lost in a shootout to Somers that year. 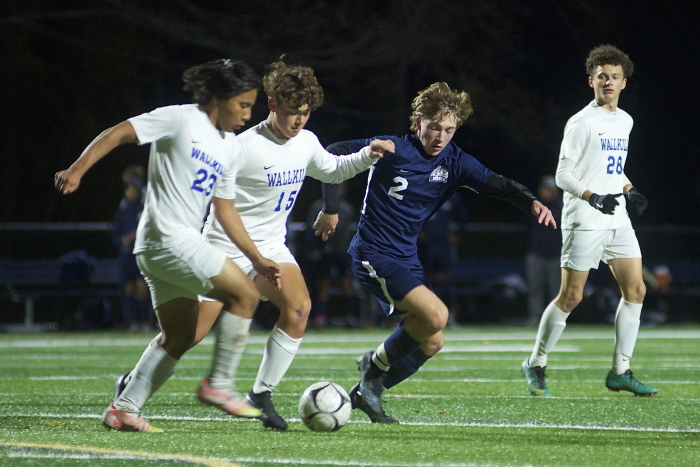 On its way to the title, Beacon took care of business on Wednesday at home, dominating Wallkill on its way to a 2-0 victory.  Chase Green scored seven minutes into the match on a pass from Miguel Ruiz, who had his own goal four minutes before the half.

Wallkill packed its defense, making scoring opportunities for Beacon difficult, but that strategy slowed its own offense, which recorded no shots on goal.

Seaman called it a “relatively comfortable win” and called out Alex Wyant and Tommy Franks for their play, as well as Green and Ruiz.

In the first round of the playoffs on Oct. 23, the Bulldogs defeated eighth-seeded Washingtonville, 1-0. Dillon Kelly scored the goal on an assist from Green. Again, keeper AJ Lucas did not see a shot.

The New York State Sportswriters Association this week ranked the Bulldogs as the fifth-best Class A boys’ soccer team in the state.

Haldane, seeded No. 3 for the Section I, Class C tournament, traveled to Yonkers on Wednesday and scored an easy upset, defeating No. 2 Yonkers Montessori Academy, 6-0. 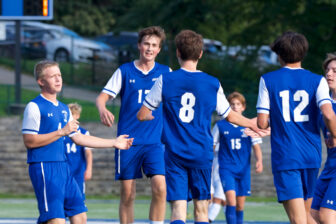 The No. 3 Blue Devils upset No. 2 Yonkers Montessori Academy in the Class C semi-finals and are headed to Saturday’s title game.

Haldane (9-7-1) advances to the title game on Saturday at 8 p.m. at Lakeland High School, where the Blue Devils will face No. 1 seed Alexander Hamilton. Haldane lost to Hamilton in overtime, 1-0, during the regular season. The winner will advance to face Section IX champ S.S. Seward on Tuesday at Hendrick Hudson High School.

“We scored in the first two minutes, so the team was focused,” said Coach Ahmed Dwidar.

It was Haldane’s seventh straight win, sending the team to the sectional finals for the first time since 2013. Dwidar also coached that team, which won the title.

Things were looking grim for Haldane in the fourth quarter on Oct. 23 at Blind Brook, with the Blue Devils trailing, 14-6.

But Haldane punched in the tying touchdown early in the fourth and delivered the decisive dagger with 11 seconds remaining when quarterback Ryan Van Tassel (10-for-19 for 112 yards, two TDs, one interception) connected with Ryan Irwin for a 20-14 win. 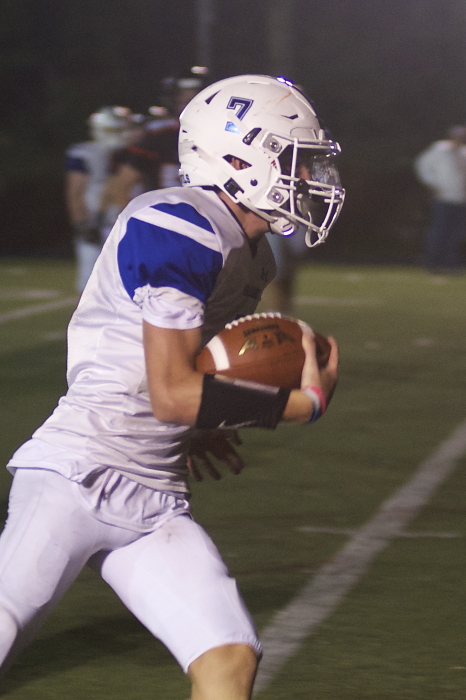 “That was absolutely a gritty win for us,” said Coach Ryan McConville. “We dealt with early turnovers and struggled a bit moving the ball. But in the fourth quarter we moved it, picked each other up and competed.”

Haldane went up 6-0 on a 2-yard run by Evan Giachinta, and that was the score at half. The team was slowed by two first-half drives that ended in turnovers.

Blind Brook struck twice in the third quarter on a pair of touchdown runs but Van Tassel found Julian Forcello on an eight-yard TD pass to knot the score at 14-14.

Blind Brook followed with a long drive, but the Haldane defense came up with two stops at the goal line and took possession on their own six-yard line with 1:40 to play. The offense then drove 94 yards for the winning score.

Haldane (6-1) will finish its regular season on Saturday (Oct. 30) at Dobbs Ferry (7-0) with a 1 p.m. kickoff. The Blue Devils then have a week off before meeting Tuckahoe (6-1) on Nov. 12 at Arlington High School in the sectional title game. The schools are the only Class D competitors in Section I. Haldane was ranked this week by the NYSSA as the 13th-best Class D team in the state, while Tuckahoe was No. 9.

Meanwhile, Beacon couldn’t slow Minisink’s running game in a 21-7 loss on the road on Oct. 23.

The Bulldogs scored their only touchdown in the fourth quarter on a 50-yard pass from Jason Komisar to Caliel Daughtry.

“We couldn’t stop their inside run,” said Coach Jim Phelan. “Their top running back got 156 yards on us; that’s not what we want.”

Against Minisink, Komisar ran six times for 43 yards and completed 9 of 14 attempts for 151 yards and a touchdown. Isaac Hansen had 58 yards on six carries, Daughtry had two receptions for 65 yards and Tyler Haydt recorded two sacks. 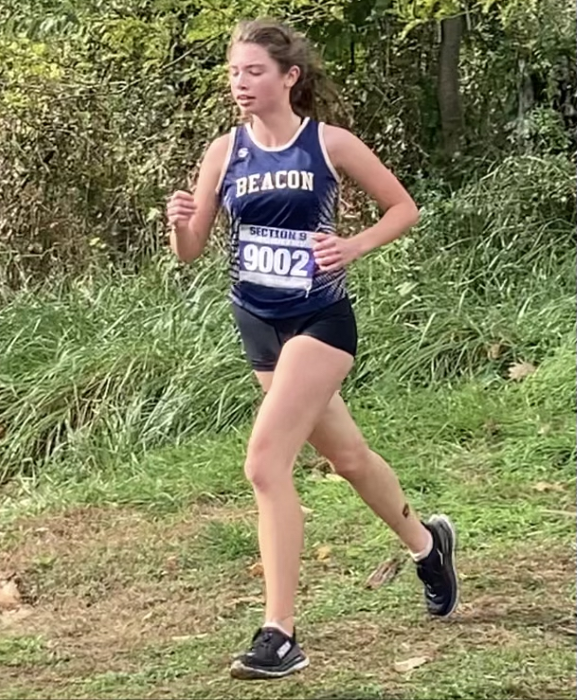 Coach Jim Henry said a majority of his runners had personal-best times and “they’re peaking nicely heading into next weekend’s Section IX championships [at Bear Mountain]. Evan LaBelle opened up some rival coaches’ eyes by outkicking four runners over the last quarter-mile.”

Haldane defeated Tuckahoe, 3-0, on the road on Monday (Oct. 25), with Meghan Tomann handing out 25 assists. Megan Farrell had 20 digs and Jill Weinphal added five, to go with eight aces.

“We had great passes, we were able to set all positions and we dominated at the net,” said Coach Kristina Roling. “Our middles did a good job getting touches and blocks to keep our energy high.”

Last week, Haldane fell at Putnam Valley in straight sets. Farrell had 20 digs and Tomann had 16. “We played hard but fell short on our serve-receive and passing game,” Roling said. “Getting the pass to the setter has been one of our primary goals this year.”