Stowe Boyd of Beacon is the founder and managing director of Work Futures. He also blogs at Beacon Streets (beaconstreets.com). 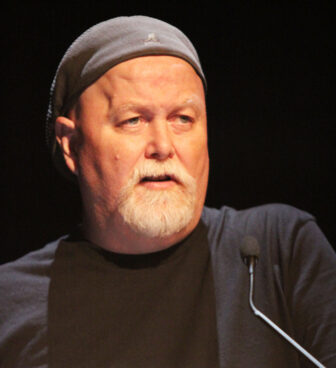 You describe yourself as a “work ecologist.” What does that mean?

I think about what’s going on in the world of work from the viewpoint of ecological thinking. It’s the notion that everything is complex and interrelated, as opposed to conventional management theory, which is typically a mix of anecdote and research studies. You know, let’s run a two-segment test on Zoom fatigue, as opposed to thinking about how trees communicate with mushrooms, using the general principles of ecology, such as that in nature, groups aggregate and leaders emerge. Rather than quote from some bestseller management book, I’ll cite my favorite book from last year, which was The Mushroom at the End of the World: On the Possibility of Life in Capitalist Ruins, which is a phenomenal ecological economic tract. It’s not the conventional, “Here’s how to make your employees more productive.”

How do you earn a living?

I’m a consultant. For years, I was a technology analyst, focused almost exclusively on the tools that people use in business to communicate, coordinate, cooperate and so on. Over time, my interest drifted toward the organism side of the equation. Companies like Microsoft and Google and IBM reached out. Google told me they had changed the name of a product in development, Google for Business, to Google for Work because I had made a distinction [in a column] that business is what management thinks about and work is what people think about.

The future of work appears to have changed a lot in just 18 months.

The pandemic shutdown accelerated trends that were already operative. The movement to remote work was underway 36 months ago, although a lot of large companies were saying, “It’ll never work, there’s so much value from serendipity next to the water cooler, blah, blah, blah.” Even before the pandemic, there was clear evidence that the people who were happiest, most productive, most engaged and less likely to quit, were the people working from home most of the time.

You are credited with creating the term hashtag. Where did it come from?

I was having an online discussion with friends in 2007. One of them was Chris Messina, who proposed using the hash symbol and a string of letters as a way of annotating tweets. He wanted to call them “channels,” because he envisioned them as groups where you would converse about a topic. But I argued they should be like a tag on a blog post, indicating the content for searching later, and I referred to them as hashtags in a Twitter post. In 2012, the American Dialect Society made it the “word of the year” and then it found its way into the Oxford English Dictionary and cited me.

You chair the city’s Main Street Access advisory committee. What does Main Street need? Could it be a park?
That was a notion based on what happened about 30 years ago with Memorial Drive in Cambridge [Massachusetts], where they blocked it off for a day, and then it became one day per quarter, then one day per month. We could do that in Beacon, maybe every second Saturday. Wouldn’t it be nice if Main Street, in 10 years, was a shared space supporting cars at a very low speed, and people and tables in the street? In the meantime, you have to deal with today’s problems, which is what we looked at. For parking, we proposed a three-phase model. First, take advantage of the current lots and street space and restripe, so you have more parking without more pavement. If that doesn’t work any longer — when you reach a point of failure — Phase Two would be meters. If that fails, the hypothetical third phase would be parking structures. The benefit there is you get significantly more parking without increasing the size of the lots.