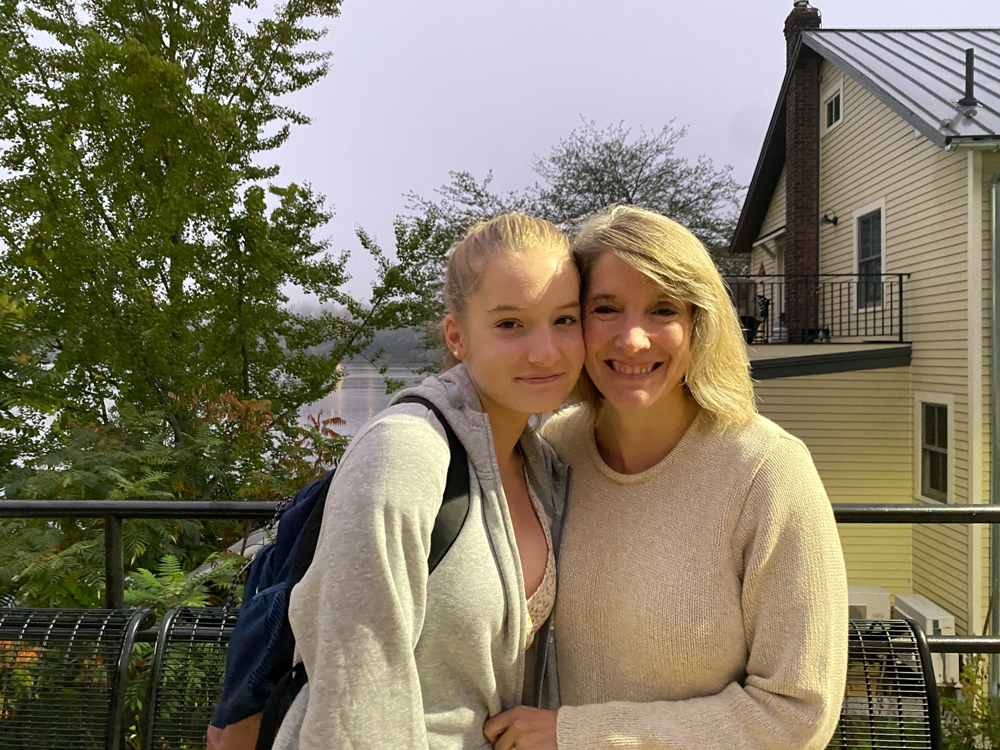 Megan Hopkins and her mother, Heather, wait on the Metro-North platform at Garrison for their early morning train. (Photo by L. Zuckerman)

When it comes to waking up early to catch a train, Heather Hopkins is not the only person in her Garrison household trying to get out the door by 6:30 a.m. Her 14-year-old daughter, Megan, also takes the train at, but her commute is to high school in Tarrytown.

Heather Hopkins has been taking Metro-North into the heart of Manhattan for years. Although she used to travel the 50 miles to Grand Central every day, she now goes twice a week to her job as fund chief financial officer for Clarion Partners, a real-estate management company.

Megan Hopkins is one of two Garrison students who commute to Tarrytown on Metro-North to attend Hackley, along with about 16 other teenagers from Philipstown who travel to Dobbs Ferry to attend the Masters School.

“It’s worth it to live here [in Garrison], especially during COVID-19,” said Heather Hopkins “We could go on walks — it was really nice. We had plenty of space for us to spread out when we had to all be home and doing school.”

Heather Hopkins uses her time wisely in the four hours she spends commuting to the city and back, whether it’s reading the news on her iPad, checking her email or reading work documents.

“I like the fact that it’s a train driven by a conductor and not a car driven by me,” she said. “It’s way more productive and less stressful.”

Megan, who is a freshman, joined her mother on the train four years ago as a sixth grader, at an age when most of her peers are getting dropped off at Haldane (where her older brother, Colin, is a sophomore) or catching a school bus. Her commute is half as long as her mother’s, but she has to take two trains, switching at Croton-Harmon.

When Megan is returning home to Garrison, her routine varies. On an express train, she usually does homework. On the local train, which means a switch at Croton-Harmon, she listens to music.

When Megan began taking the train in sixth grade, “I felt like I was so much more independent because I didn’t have to have someone drive me. I felt a sense of independence that I hadn’t felt before.”

On her first trips, “I remember only seeing Masters kids on the train platform. I would ask myself, ‘Where are the Hackley kids?’ I wanted to sit with people who were going to the same place I was because I would have felt more secure.”

As Megan got older, she began helping younger students navigate their commute to school, showing them how to switch trains, and when to get off.

Fortunately, on her first trip, she had her mother to accompany her. But after she switched at Croton-Harmon, it was all her. Four years later, mom and daughter still drive to the Garrison station together in the morning, but once on board, they say they each focus on their own commute.