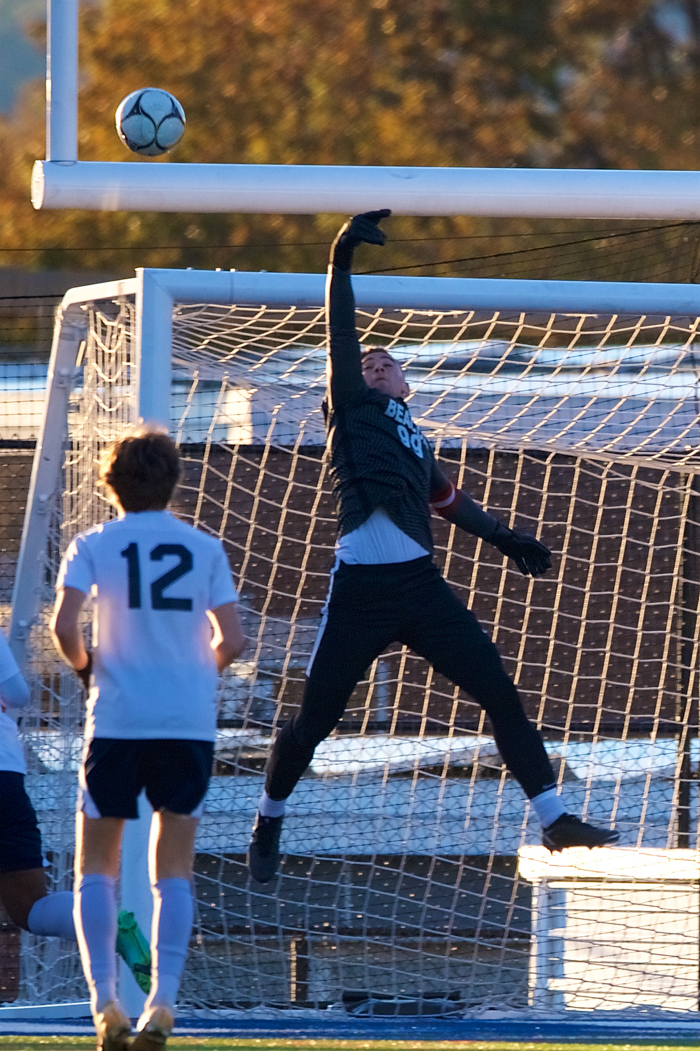 Beacon keeper AJ Lucas makes one of several acrobatic saves that kept the Bulldogs in the game against Somers. (Photo by S. Pearlman)

Two of the top-ranked Class A teams in New York state faced off in the first round of regionals Wednesday at Hendrick Hudson High School, and true to form it was No. 3 Somers who managed to score the game’s only goal, ending No. 4 Beacon’s season with a 1-0 loss.

Bulldogs keeper AJ Lucas was the star of the game, making more than a few  brilliant saves (he finished with seven) to keep his team in the game, as Somers got the better of possession and scoring opportunities. Somers scored with just under 15 minutes to play.

Beacon reached the game by winning the program’s first sectional championship on Oct. 28, dominating Roosevelt High School, 5-1, at Middletown in the Section IX title game. (Somers was the Section I champ.) Kelly, Wyant, Chase Green, Kirk Dyer and Owen Lynch each had a goal for Beacon. 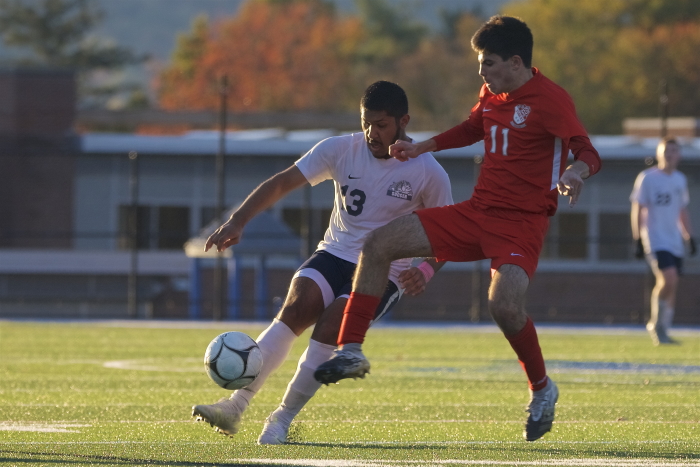 With a light rain falling throughout the game, the ball just wasn’t bouncing the right way for Haldane on Oct. 30 at Lakeland High School, where the Blue Devils dropped a 1-0 decision to Alexander Hamilton in the Section I, Class C title game.

Hamilton (17-1), ranked this week by the New York State Sportswriters Association (NYSSWA) as the top Class C team in the state, scored with 5:05 remaining on a throw-in. Keeper Ronan Kiter had four saves in net, and Haldane managed five shots on goal. 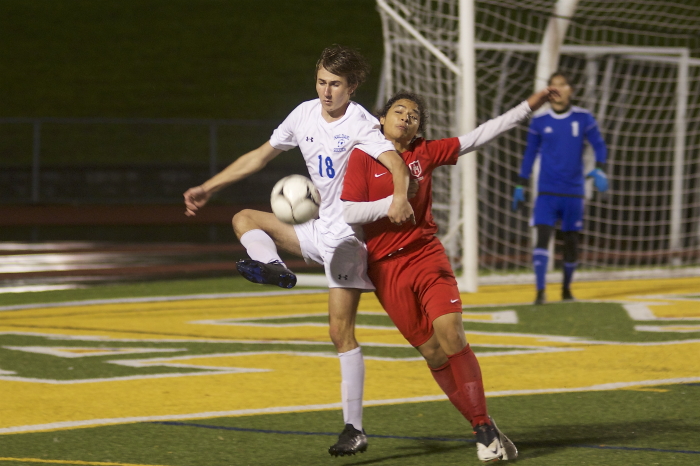 Haldane’s Emiiio Schweizer (18) gets his foot on a ball in spite of some defensive pressure. (Photo by S. Pearlman)

“We fell asleep on a throw-in, and they got off a quick shot,” said Coach Ahmed Dwidar. “It was our first trip to the sectional finals, and I think it was kind of nerve-wracking for our players.

“Their keeper was phenomenal, but I don’t think we played our best game. The rain played a factor on the turf, and our inexperience was also a factor. But we watched their celebration and will use it for motivation for next year.”

The Blue Devils finished 9-8-1, including seven wins in a row before the Saturday loss.

Beacon never found a rhythm or consistency in its offensive game on Oct. 29 in its opening Section IX, Class A playoff game against Washingtonville at home.

After a scoreless first half, Washingtonville scored on a running touchdown in the third quarter and added another TD on the ground in the fourth to go up 14-0, before the Bulldogs got on the board with a 52-yard pass from quarterback Jason Komisar to Dan Urbanak. 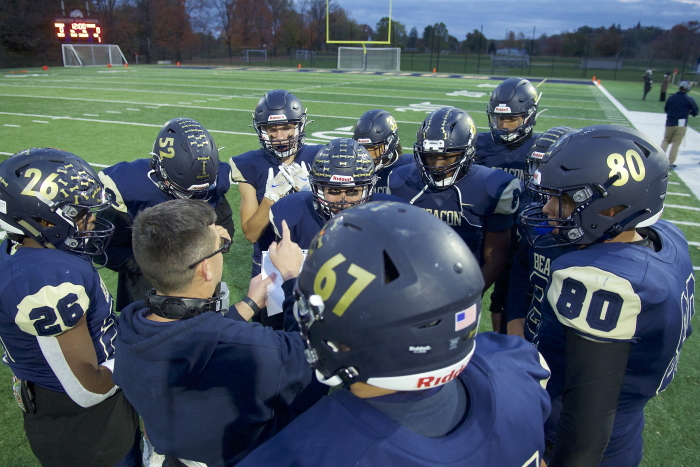 The Bulldogs lost their playoff opener to Washingtonville, 14-7. (Photo by S. Pearlman)

“That was a tough loss because I’ve had this group from freshman year,” said Coach Jim Phelan. “They gave everything they had all year.”

Komisar finished 8 of 13 for 137 yards but was intercepted twice. He also ran seven times for 42 yards and picked off a pass on defense. Running back Isaac Hansen was injured in the first half and left the game, and the Bulldogs were never able to establish the run. 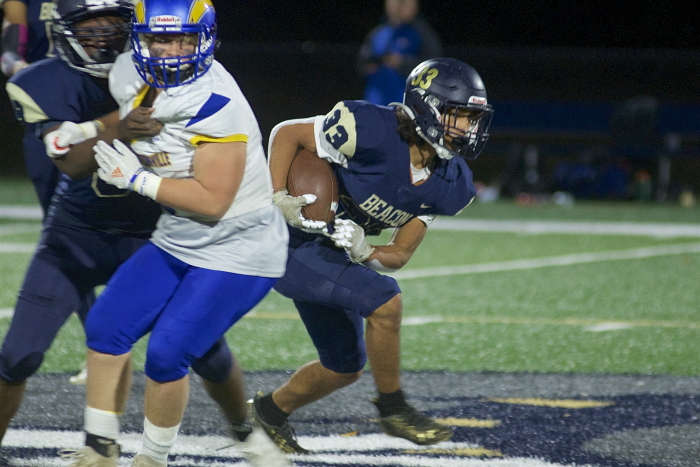 On defense, Tyler Haydt and Sam Lunsford each had two quarterback sacks, and Louis Del Bianco had one.

The team ended the season with a 5-3 record. The Bulldogs typically would play another game but will not, due to a shortage of players.

Haldane traveled to Dobbs Ferry on Oct. 30 and dropped a 57-12 decision to the 8-0 Eagles. It was not the way the Blue Devils hoped to end the regular season.

“We didn’t execute on offense, and we didn’t play well on defense,” said Coach Ryan McConville. “Two early turnovers put us behind quick, and we were down 20-0 after the first quarter.”

Haldane scored twice in the second quarter on passes from Ryan Van Tassel to Ryan Irwin but trailed 42-12 at halftime.

The Blue Devils (6-2) will play Tuckahoe (7-1) for the Section I, Class D championship game at 4 p.m. on Friday (Nov. 12) at Arlington High School. Tuckahoe was ranked No. 9 in Class D by the NYSSWA, while Haldane received an honorable mention.

After knocking off top-seeded Tuckahoe, 3-1, in the Section I, Class C semifinals, No. 4 Haldane fell to No. 2 Yonkers Montessori Academy, 4-0, in the title game on Oct. 31 in Nyack.

“We controlled the game early and played well in the first 20 minutes,” said Coach Mike Lentini of his team, which finished the season 6-10-2. “After we went into the half down 1-0, we were still in it. But we gave up a quick goal in the second half, and then we were playing catch-up. 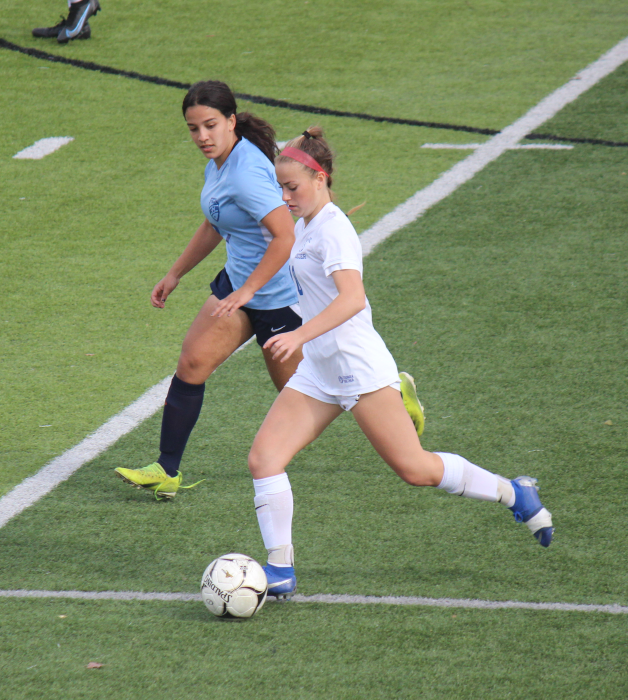 “We looked a bit flat after they scored that second goal,” he said. “Chloe Rowe played her heart out for us, and Katie Shields also played well in back.”

Keeper Betsy Cates made eight saves in net, while the Blue Devils had five shots on goal.

On Oct. 28, the Blue Devils upset No. 1 Tuckahoe, 3-1, behind a hat-trick from Rowe; Sara Ferreira and Bianca Harmancin each had an assist and Cates had eight saves.

Haldane got past North Salem on Oct. 30 in the first round of the Section I, Class C tournament but fell in Monday’s quarterfinals, 3-0, to top-seeded Dobbs Ferry. The Blue Devils, the No. 8 seed, finished the season at 9-11.

Emily Tomann had seven kills, and Megan Tomann had 14 assists and two aces in the loss. “That was a hard matchup for us,” said Coach Kristina Roling. “Dobbs Ferry is No. 1 for a reason. They have strong hitters and a tough defense.”

“The girls had a positive and fierce mindset going in,” Roling said. “They battled through five intense sets. We had great serving accuracy, and our defense was consistent.”