I was on the phone with my old Oregon roommate, gushing in a fit of nostalgia as I drove down Beacon’s bustling Main Street for the first time. I slowed to a stop and snapped a photo of Mount Beacon, triumphantly poking out at the end of the street as the city’s backdrop.

I’d spent years living in Portland before moving back east (I am originally from Massachusetts) to New York City to move in with my long-distance boyfriend, whom I married in 2019. Living in the city for 2 1/2 years became its own great adventure, but I couldn’t deny how much I was missing my West Coast home.

My husband and I were on the hunt for the perfect Hudson Valley spot to settle in, during the peak of the pandemic, no less. We were looking for a place that married our individual preferences, setting the stage for our life together. He wanted access to the city and I wanted outdoor adventure. We both were unflinching in our need for a buzzing food and drink scene — and, of course, a community of dog lovers. Deep down, I was simply in search of an East Coast version of my old stomping grounds in Portland (population 652,503).

It’s not just the topography that elicits a similarity — Beacon nestled equidistant between the Hudson River and Fishkill Ridge; Portland between the Willamette River and Mount Hood. Both have a distinct quirkiness that defines the cities’ cultures and arouses affection from residents and visitors alike. 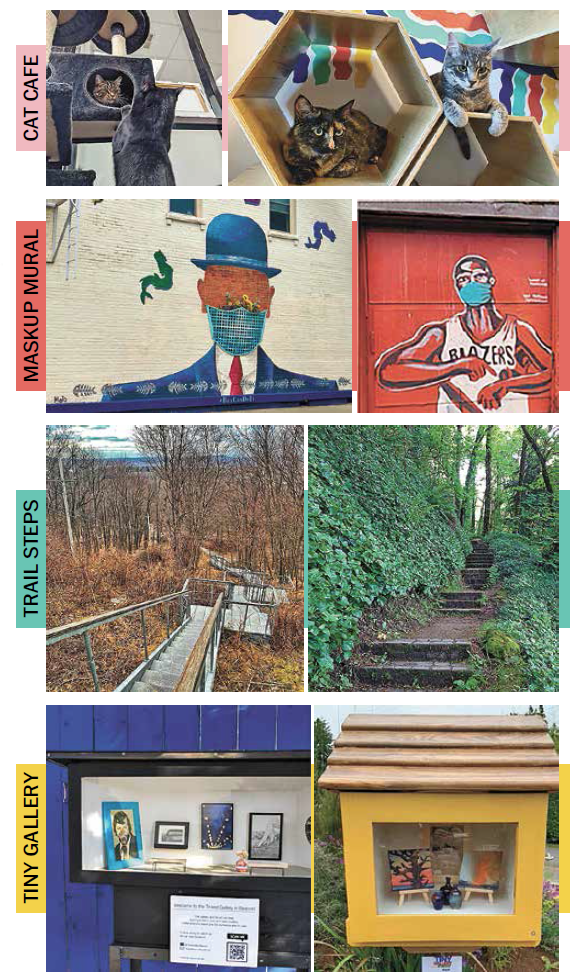 Most folks, even from the East Coast, recognize Portland’s famous “Keep Portland Weird” tag. Adopted from Austin, Texas, the slogan was used in the early 2000s to promote the city’s small businesses. It was a timely fit for Portland, whose popularity only increased after a television series fatuously entitled Portlandia leaned into the city’s “weirdness,” highlighting its residents, food scene and ’90s hipster culture.

Portland is now a major West Coast hub, and with Beacon’s uncanny similarities, this small Hudson Valley city may not be far behind.

Both cities boast small businesses which have mastered an unapologetic, unconventional charm, pouring creativity into their novel storefronts. Canned booze bars and dueling artisanal doughnut shops are packed with flannel-clad customers who brave the long lines to get a taste of authenticity on a Saturday morning, not to mention pairing the baked treat with a piece of customized merch or a free homemade dog treat, plucked from a cashier-side cookie jar.

PDX (Portland’s airport code, now a catch-all ID used by locals) and Beacon seem to capitalize on upgrading the little joys in life. Things like being able to pet a cat while enjoying an oat milk latte at Beans Cat Cafe in Beacon goes ditto for Portland’s Purrington Cat Lounge. Or sipping an IPA while hitting a high score on a Ms. Pac-Man machine at Ground Kontrol Arcade Bar in downtown PDX. Now you can add vegan nuggets to your pixelated, animated afternoon at Beacon’s Happy Valley Arcade Bar.

Choosing from four alternative milks for your latte is typical and brunch can quickly turn into a hike, with a trailhead steps from both city centers. Taking your dog to a Beacon Barks Dog Parade or the PDX Pug Crawl are highly anticipated events for Beaconites and Portlandians.

But there’s more to these cities than what you sip, bite or climb. Portland and Beacon’s streets are vivid eye candy, punctuated with brightly painted murals that hint at robust arts communities and culminate in museums and galleries.

Sidewalk strolling evokes a playground-like excitement for adults interested in music and fashion, too. Consignment stores churn out all kinds of treasures and shops feature only local creations, so the business owners have more than just a product to sell — they have a story to go with it.

A leave-one-take-one sidewalk bookstore and tiny gallery are among the other novel details sprinkled throughout the cities’ streets. Details like this, a rarity in other places, promote engagement in their communities, connecting readers and creatives in town.

As we settled into Beacon, I realized that these two cities are leaving matching marks on opposite ends of the country.

Sure, some may dub the Portland and Beacon scenes too eccentric, or silly even. Beacon is not a perfect match for my beloved Portland, but as it continues to grow, so do the similarities.

The consistent sameness has been both cities’ devotion to lifting up local businesses and shaping their communities around creativity and novelty.

Not everyone is willing to wait in line for a vegan doughnut, a turn at Mortal Kombat or a lip-smacking sour beer. But those who do — who visit and indulge in the quirkiness, delight in the unconventional and embrace the weird — usually end up staying.

That’s exactly what I did.