The honor of showing work at the 200th exhibit hosted by the Beacon Artist Union (BAU) goes to Stephen Derrickson, one of the collective’s more recent members. Mendacity, Myopia, Amnesia, Atopia opens at the Main Street gallery on Nov. 13. 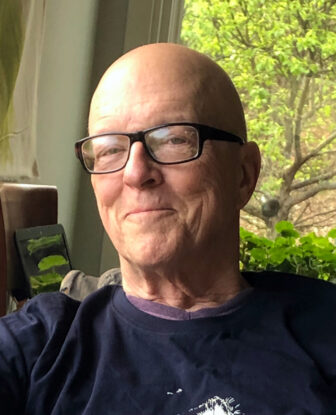 Derrickson’s work typically combines digital images with text. Accompanying the exhibit will be a book containing what he describes as a “dialogue between the word and the images that runs through my work.”

The artist arrived at college to study photography but shifted to painting and drawing. “I was cavalier — it was my youth — and as the photography program had lots of competition to get in, I figured I’d try something else,” he recalls. He later earned a graduate degree in painting from the Tyler School of Art in Philadelphia and spent seven years as an assistant professor at the University of Texas in Austin, where he taught painting, drawing and 20th-century art history.

From the mid-1980s to the mid-1990s, he lived in New York City, often working with “large-scale pastel and charcoal drawings that referenced cinema, particularly film stills,” he says. “I was an image scavenger, which I continue to be, although once I had a digital camera I started taking many pictures instead — so many that I have an image bank.”

Derrickson says he lost interest in showing in galleries and left the city for the Hudson Valley (he lives in Woodstock). “At one point the book form took over,” he says. “At first the images were collage-like, because they were meant to support the work I was showing. Now the books are front and center.”

The Beacon Artist Union was founded by Gary Jacketti in a small space on the west end of Main Street; it has been at 506 Main for nine years. 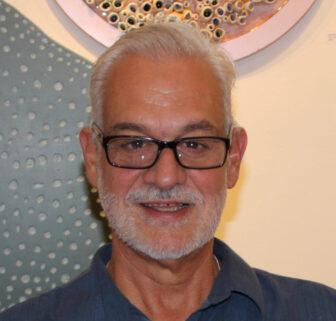 After moving to the area to take a job at West Point, Jacketti opened Bulldog Studios in the former Beacon High School building. It “never quite took flight,” he says, but he met many local artists and decided to create BAU “to promote art and the arts and to have a place for members to experiment and grow.”

It began with six members and today has 11. A majority must approve new applications. Once accepted, each member is given the gallery space for a month.

When those months are allocated, each artist suddenly has a deadline, Jacketti notes, which can be “conducive to creativity, and daunting.”

We asked a few BAU members, past and present, for their thoughts about the collective. Here are excerpts:

Ilse Schreiber-Noll: “BAU is a place where I can show my work even if still in the experimental stage. I also like the fact that we are members of all ages. This leads to a wonderful and fresh exchange of ideas and thoughts.”

Carla Goldberg: “I’m an experimenter at heart, which is what BAU is about. The task of taking on themed shows gave me permission to try one-off ideas, push boundaries and hear honesty from our visitors. The growth in my art and the materials I use today are a direct result of 13 years of once-a-year solos.”

Jebah Baum: “The process of making art is generally a rather solitary experience. For artists, presentation can sometimes be an afterthought, but it is in fact a vital part of supporting our studio practices. It is inspiring to witness this group of artists work together to run and maintain a successful gallery.”

Pamela Zaremba: “Each year you are given space for a solo show that takes me a year to complete. Without this deadline, I doubt I would complete anything. We are like a big family — dysfunctional at times, but still a family!”

Stephen Derrickson: “While it is a bit more work, and we rent our space, the artist collective is closer to controlling the means of distribution, thus stepping away from the dealer model, with its potential for control, indifference and even fraud. It calls upon artists to step away from ego and toward emotionally intelligent communication.”

Lukas Milanek: “Building a career as an artist is never easy, but being surrounded by others on a similar path motivates us to continue. Together, we help shape each other’s practice through exchanging ideas, opportunities and constructive critique. We’re grateful for the way the community has supported us, too.”

Derrickson became a BAU member not long before receiving an out-of-the-blue diagnosis of esophageal cancer. He is undergoing chemotherapy and has found the process taking more of a toll on his stamina than he expected.

Still, he has continued to work.

“I have been a Buddhist for all the 21st century, so that gives me a perspective,” he says. “But when you have your mortality flash before your eyes, it changes you — if you let it. My book segues between politically charged critiques and meditative images and text that have to do with deep appreciation of the natural world and impermanence. They’re philosophical and reflective, both in the essays and photography.

“Cancer became a writing prompt for me. I had an epiphany when I was diagnosed: I was going to be honest, reflective and open about it — my best self. In the book, this is intermingled with the politics of America.”

His latest book includes a 90-page chronicle: “Pandemic Cancer Insurrection.” In it, Derrickson says, are “reflections of being in lockdown with the pandemic but also in lockdown in a virtual paradise, overlooking the Catskills, with lots of time for meditative walks, hiking and swimming. It doesn’t focus only on the cancer.”

The book’s second piece “chronicles how I came to this place, as a student, teacher, practicing artist over a 50-year period,” he says. “It namechecks a lot of people I’ve learned from. It’s an essay that tells a story, a fragmented, suggestive, story about the particular moment I’m coming from. I try to manifest in a way that’s visually pleasing.”

The third piece, slightly longer, is “an homage to all the French theory and cinema that I’ve grown up with. I had a little love affair with the French. I took my photographs and blackened the page like cinema projections. Underneath text there are subtitles, which ‘read’ like silent film captions.”

In much of Derrickson’s work, there is what he describes as “a dialogue between work I do to put on a wall, for public display, and work in a book form. I don’t necessarily beautify the world, but reflect on it, what it means to be human, an observer. I’m an artist involved in inquiry, critique and reflection, rather than in beauty or style. I am an American dissident — but the minute you think you have me pinned down, I’ll surprise you.”

The BAU Gallery, at 506 Main St., in Beacon, is open from noon to 6 p.m. on Saturdays and Sundays. Call 845-222-0177 or see baugallery.org. Derrickson’s exhibit runs through Dec. 5. Two shows, Pamela Zarenba’s “Overcome” and Ilse Schreiber-Noll’s “I Don’t Know What I Am Doing” continue through Sunday (Nov. 7).