On Monday (Nov. 15), President Joe Biden is scheduled to sign a bipartisan infrastructure bill that will send $1.2 trillion to the states over five years to repair and build roads, bridges, transit systems, water pipes, electric vehicle charging stations and airports.

But for Rep. Sean Patrick Maloney, a Democrat whose district includes the Highlands, it boils down to three things.

“Jobs, jobs, jobs,” Maloney said on Monday (Nov. 8) at the Newburgh waterfront during a news conference to mark the passing of the Infrastructure Investment and Jobs Act. “Good, well-paying jobs that you can raise a family on, thousands of jobs right here in New York, millions of jobs across the country, and it is the most significant investment we have ever made in our country’s infrastructure.” 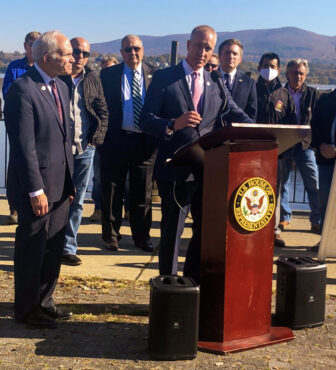 Rep. Sean Patrick Maloney (at podium) and state Assembly Member Jonathan Jacobson (left), whose district includes Beacon, spoke at a news conference on Monday at the Newburgh waterfront about the recently passed infrastructure spending bill. (Photo by B. Cronin)

Todd Diorio of Laborers’ Local 17 said “a lot of trades are going to benefit from this — we could use the work.” Diorio praised Maloney and Congress for making sure the legislation specifies that projects must pay prevailing wages and use American materials.

While agencies in each state will decide how the funds are used, some provisions address specific projects. As a member of the House Infrastructure and Transportation Committee, Maloney said that he wrote large parts of the legislation, including the Bridge Investment Act, which will direct $12 billion to repair bridges nationwide that have been classified by the Department of Transportation as structurally deficient.

“We’ve got 1,700 structurally deficient bridges here in New York — 170 bridges like that in my congressional district — and 40,000 of these bridges nationally,” he said.

Michael Sweeton, supervisor of the Town of Warwick, noted at the news conference that there’s a bridge in his municipality that needs $5 million in repairs. “That’s beyond the capacity of our residents to fund,” he said. Because of the legislation, “we are going to get that bridge fixed.”

The bill also directs $12 million to Stewart International Airport in New Windsor and $800,000 to the Hudson Valley Regional Airport in Dutchess County. The Metropolitan Transportation Authority, which includes the Metro-North commuter line, will receive $11 billion, and Amtrak’s entire maintenance backlog will be funded.

Efforts to clean up contaminants that have plagued many communities’ drinking water, including in Newburgh, will be funded with $10 billion, while other money will jump-start the Gateway Tunnel, a long-delayed project to construct a rail tunnel between New York and New Jersey.

For more on road, bridge, dam and water system needs in the Highlands, see our series, Operation Infrastructure, at highlandscurrent.org/infrastructure.

State Sen. James Skoufis, a Democrat whose district includes Newburgh and much of Orange County, said that he expected the Legislature would chip in.

“In March, we’re going to be negotiating a five-year DOT capital plan,” he said. “We’re going to leverage this money to make sure that all the projects that Sean referenced get done with state and federal money. [But] it cannot happen without the federal money.”

Assembly Member Jonathan Jacobson, a Democrat whose district includes Beacon, and who said he began his political career campaigning to fix local roads, called the funding long overdue for the Hudson Valley.

Maloney said the spending would not add to the federal deficit because of provisions in the Build Back Better bill, which is being finalized in Congress. “No one making under $400,000 a year will see their taxes increase,” he asserted.

Maloney said the infrastructure bill was one of three that Congress has written in the past year that constitute “the lion’s share of President Biden’s domestic agenda,” beginning with the American Rescue Plan Act, which is sending $1.9 billion in pandemic relief funds to communities. “That’s why your cops, firefighters, your first responders and your health care workers didn’t get laid off,” he said.

The Build Back Better bill will be, according to Maloney, “the most important investments in our families” since the New Deal of the 1930s championed by then-President Franklin D. Roosevelt, a Dutchess County native. The bill includes, among other provisions, extending the monthly Child Tax Credit payments, investments in child and elder care, increasing health care coverage and helping the U.S. achieve Paris Climate Accord goals by creating incentives to increase renewable energy and a Civilian Climate Corps.

Maloney said that he expects Congress to vote on the Build Back Better bill before Thanksgiving.

“I’m very confident that it will get passed,” he said. “I’m sure there will be some twists and turns, and there’s going to be some things that go bump, but all you’re seeing is democracy function.”