Abdullah Wajid is an imam with the Masjid Ar Rashid Islamic Teaching Center at 352 Main St. in Beacon. His responses are excerpted from an interview for Beaconites. The mosque will be open to the public for Family Day on Nov. 28. 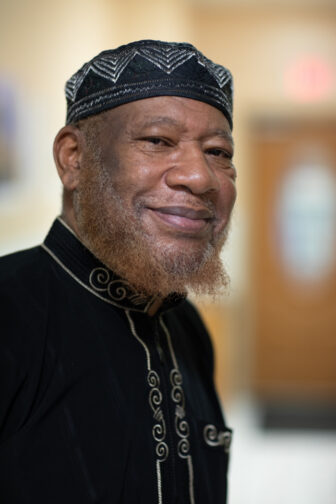 Were you raised Muslim?

I was raised as a Christian. My mother and aunts and uncles, they were very strong Christians. However, when I went to the military, I began to have concerns about what was going on in the communities, especially among African Americans. It ended with me becoming part of the Nation of Islam, which is under the leadership of Minister Louis Farrakhan, and embraces a radical, militaristic mindset. We called ourselves Muslims, but we really weren’t, because we knew nothing of Islam. In 1975, we were introduced to Islam, in terms of the Quran, in terms of making prayer, and we became conscious of Prophet Muhammad, peace be upon him. And that’s how I came from the Nation of Islam to Islam.

How would you describe the Muslim community in Beacon?

We’ve been in Beacon for more than 30 years. In 1996, we moved to Main Street. The composition of the mosque was mostly African American, with a couple of Egyptian and maybe one Pakistani family. Today there’s a wide range of people who come. The number of families is anywhere from 150 to 200. You won’t see them at one time unless it’s a celebration like what we call Eid — we have two every year — or Ramadan. Many live in the surrounding areas and commute to the mosque. We have one African gentleman who comes every morning from Highland to make the prayer at 5:30 a.m.

What’s something people may not know about the mosque?

People are not as informed as we would like them to be about Islam in general and us in particular, because of the different things that happen in this society and the media. We have made a very strong effort to let the people know that our mosque is approachable. You can come in; there are no rules that say you have to be a Muslim. We want to let the people know that we are supportive of the community. We try to demonstrate the best of character and try to be sensitive, especially to our neighbors. In Islam, neighbors are very important.

Have you experienced intolerance?

The only time we really experienced anything like that was right after 9/11. It was someone who didn’t have the proper understanding and maybe had some other feelings because of what he might have heard of, or thought. They broke our window. Everything else was so minor, it’s not even worth talking about. But you know, Islam says there’s some good in every situation. And there was some good in that also, because when that happened we had an outpouring of support from the people of Beacon and from the various religious communities in the area. We had no idea that people were that wonderful.

What do you think about all the changes in Beacon?

The changes are amazing. We now have this huge structure [at 344 Main St.] next to our mosque, which is unbelievable. When we came into our building, Main Street was kind of devastated. It was in bad shape. But Beacon has revived tremendously. The downside is Beacon seems to be going in a way that is unaffordable to live. Many people who visit the mosque say: “The town is so nice. I’d like to move here.” But they might not be able to afford it. That is one of the weaknesses of this new development.