The Blue Devils of Haldane High School had their chances to make some noise in the Class D regional opener on Nov. 19. But every time it looked like Haldane was about to make a move, Section VII champ Moriah came up with a big play to silence the threat.

Moriah wrestled away momentum early in the game, which was played at AuSable High School, about four hours north of Cold Spring, and never let go on the way to a 22-0 victory over Haldane, which finished the season 6-4. 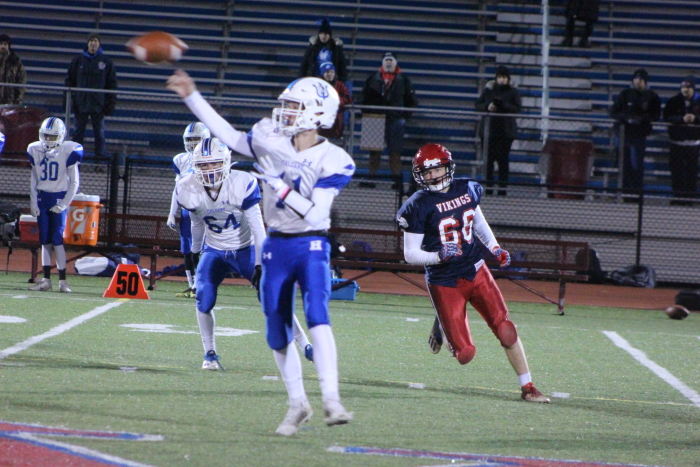 Ryan Van Tassel gets off his pass before a Moriah defender can reach him. (Photo by Keith Lobdell/Sun Newspapers)

A week earlier, the Blue Devils had lost in the Section I title game to Tuckahoe, 48-40, but received an at-large bid to continue in the state tournament. In a game on Nov. 20, Tuckahoe fell to Section II champ Greenwich, 41-20, which will now face Moriah on Nov. 26 with the winner advancing to the state championship game.

The Blue Devils’ defense came up big twice in the first quarter, stopping Moriah on a fourth-and-12 from the Haldane 20 on the game’s opening series, and later sacking the Vikings quarterback on a third-and-20, forcing a punt.

But the offense never found a rhythm.

Haldane had its best chance early, following the punt, which gave them possession at the Viking 40. But they fumbled the ball away immediately, and the Vikings cashed in with two runs that put them at the Haldane 6-yard line. Two plays later, with 7:42 left in the half, Moriah led 8-0.

In the next series, Haldane’s Ryan Irwin appeared to run for a touchdown after catching a pass from Ryan Van Tassel, but the sideline official ruled he had stepped out of bounds at the 45, and the drive fizzled.

Haldane had another opportunity after an interception at its own 7-yard line, but the Blue Devils were forced to punt and the Moriah quarterback broke loose for a 50-yard touchdown run with 32 seconds left in the half. After a two-point conversion, the Vikings led 16-0.

Van Tassel was intercepted in the third quarter at midfield, which led to a 26-yard TD run for Moriah and a 22-0 lead with 2:30 remaining in the quarter.

Coach Ryan McConville said turnovers (his team had four, leading to two touchdowns for Moriah) and the loss of one of the team’s best players (Giancarlo Carone, who suffered an elbow injury early in the second quarter) cost his team. 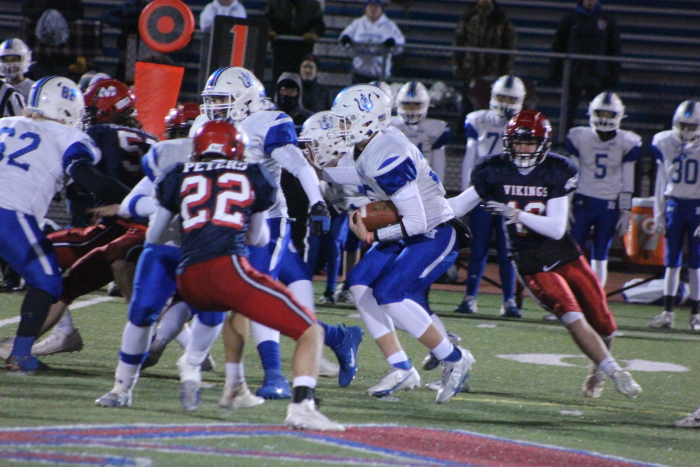 Evan Giachinta trying to find a hole against the Moriah defense. (Photo by Keith Lobdell/Sun Newspapers)

“Usually when teams make mistakes, we capitalize,” he said. “But we didn’t create turnovers. When you’re playing the No. 8-ranked [Class D] team in the state, every drive, every possession is important. Turnovers will cost you, and they cost us a chance to score or change the momentum.”

There were bright spots to the season. Haldane won its first league championship since 1984, the Blue Devils were undefeated at home, and the team won four straight games to end its regular season.

Carone, a senior wide receiver and defensive back, earned All-Section and All-League honors, and was named the league’s Defensive Back of the Year.

Irwin, a senior wide receiver and defensive back, and Evan Giachinta, a sophomore running back and linebacker, were named All-Conference and All-League, and Thomas Tucker, Van Tassel, Soleil Gaines, Dylan Rucker, Jake Mason, Jack Hartman and Will Etta received All-League honors. McConville was named the league’s coach of the year.

The team graduates nine seniors, all of whom were starters on offense and/or defense. “I’m excited about next year,” McConville said. “Right now we’re excited for them to dominate in basketball, then baseball. But we’ll have some young talent back, and the kids will keep getting better.”