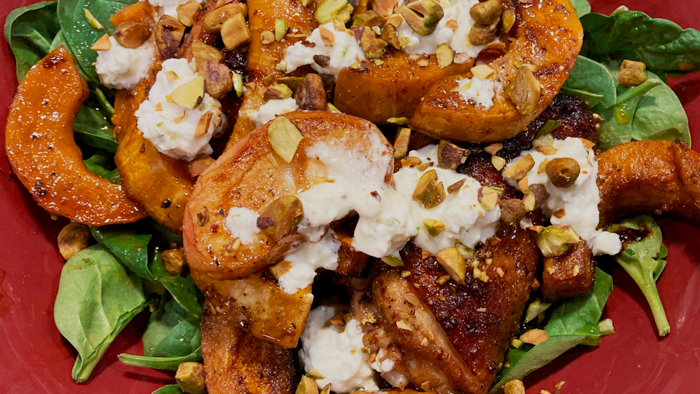 For me, cooking is about coming back to something simple. It’s not a test or a contest and shouldn’t be that big a deal. It’s not about cooking — it’s about eating — nourishment for the body but also feeding the mind, senses and soul.

How does a recipe develop? It’s not magic. It can be as simple as Samin Nosrat’s salt-fat-acid-heat (to which I would add sweet) — a formulation, or rather, informal framework, for making natural flavor and textural connections that work and make the familiar new again.

You might spot this week’s recipe as a return to themes from recent columns: cider, Turkish-inflected spices, butternut squash, sheet-pan cooking.

The combination of cumin and Aleppo pepper worked deliciously in this summer’s Green Shakshuka. They made a return engagement for a Spiced Squash Bisque. With last month’s boiled cider, the nascent formula had the makings of a nice seasonal glaze for roast squash.

Which it did. When it was topped by a crumbling of feta over the top of the squash, I was reminded of the textural trick that food writer Albert Stumm came up with trying to replicate creamy Bulgarian feta: smoothing the coarse cheese by tossing it in a couple of tablespoons of heavy cream. The addition of lime zest and lime juice further brightened the dish. Chopped, roasted pistachios add a nutty crunch. Completely satisfactory, for now …

But on a second pass, with a pack of Green Circle chicken thighs needing to get used, the thought occurred: Why not make a meal of it?

The chicken and squash, roasted in the same earthy spices (with a touch of sweetness from the cider) were a natural match and tastily pulled together by creamy cheese sauce and crunchy nuts.

What more could you want? Maybe a salad? After I remembered another favorite sheet-pan recipe (this one with chicken, fennel and shallots in a lemon vinaigrette, itself containing chunks of Parmigiano-Reggiano) served hot on mixed fresh greens, this one came together atop a bed of baby spinach.

Further notes, extrapolations and second thoughts keep cropping up: First, this could easily be a vegetarian recipe. The squash would be more than enough, and as we enter the holiday season, the squash — no chicken, no spinach, maybe some apples — would be an exceptional holiday side. Or you could substitute maple syrup or honey for the reduced cider. (Again, the apple flavor is nice and could be amplified by coring and slicing into thin wedges and roasting along with the squash and chicken.)

If the feta-cream formula seems too precious, simply crumble some goat cheese over the dish. If you’re feeling particularly adventurous, make a gastrique with some of the boiled cider and a splash of cider vinegar and drizzle it warm over everything.

There are certainly other connections and substitutions that you can use to make this your own, but the best connection you can possibly make is by sharing and enjoying the holidays with friends.

1. Heat oven to 400 degrees with rack in the lower-middle position. Whisk together the oil, cumin, brown sugar, 2 to 3 tablespoons of the reduced cider, 1½ teaspoons of the Aleppo pepper, 2 teaspoons salt and 1 teaspoon black pepper in a measuring cup. In a large bowl, toss squash with about ¾ of the spice “dressing”; distribute squash evenly on a rimmed baking sheet. In the same bowl, toss the chicken with the remaining spice dressing and nestle among the squash pieces. Pour any remaining dressing over the chicken and squash. Roast until golden brown, about 45 minutes.

2. In a small bowl, mix together the feta, cream, lime zest and juice and the remaining Aleppo pepper. Reserve.

3. To serve, plate individually, mounding squash and chicken on a handful or two of baby spinach. Drizzle some of the pan juices over all. Dot with the feta-cream mixture and garnish with chopped pistachios.