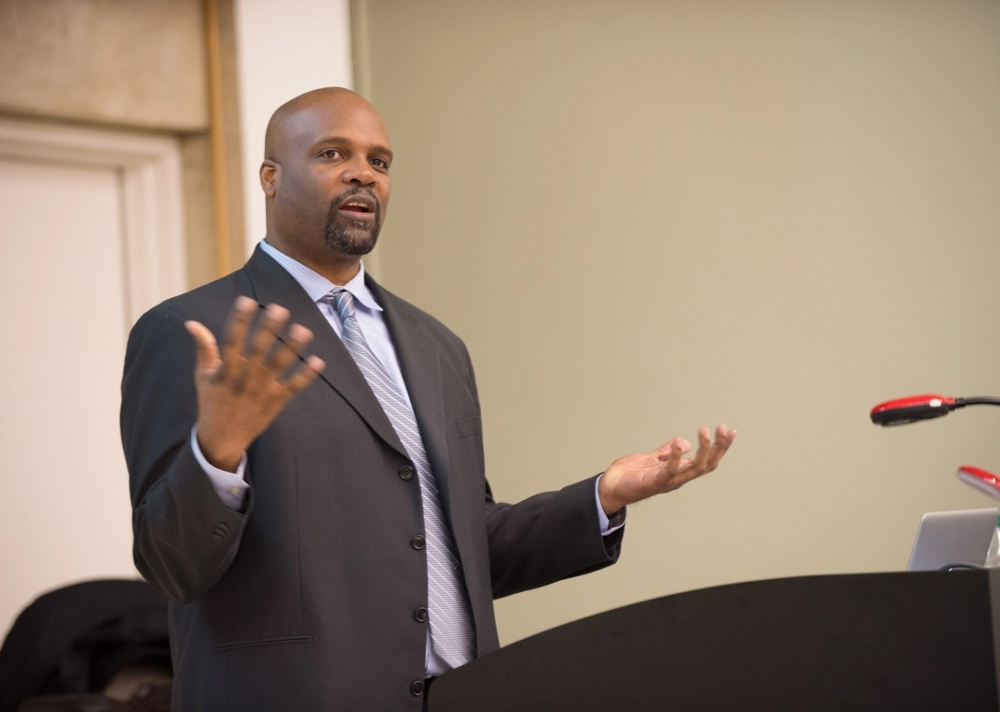 One of the stories Jevon Hunter talks about in his workshops is the Chinese Exclusion Act of 1882.

Signed into law by President Chester A. Arthur, the measure banned Chinese immigration after decades of animosity toward the newcomers, who had been arriving in the U.S. since the 1840s, particularly on the West Coast, providing low-cost manual labor.

The law wasn’t repealed — and even then, a national quota of 105 Chinese immigrants per year remained — until 1943, when the U.S. and China became allies in World War II.

When teaching students about that period in history, Hunter, the chair for urban education at SUNY-Buffalo State, tells the public school officials who attend his workshops that it’s critical to bring more than one perspective into the narrative. What stories that we tell reflect privilege, he asks? Which voices are left out?

In an interview this week, Hunter said he encourages teachers to connect that time with current events by asking: Where do we see these kinds of acts still being created in society? When considering recent U.S. efforts to limit immigration, he noted, “we’re really not too far from still doing it.”

Hunter, who has advised more than 25 districts and county Boards of Cooperative Educational Services (BOCES) in the last six years, was in Beacon last month for two days of workshops as the city school district has begun Phase 1 of New York State’s three-year plan to implement “culturally responsive-sustaining” (CR-S) education.

The CR-S initiative, which accentuates cultural differences as strengths in an increasingly diverse world, was launched in 2018 in adherence to the federal Every Student Succeeds Act. Built upon the four principles of a welcoming and affirming environment; high expectations and rigorous instruction; inclusive curriculum and assessment; and ongoing professional learning, a 64-page “framework” asserts that it is “grounded in a cultural view of learning in which multiple expressions of diversity (such as race, social class, gender, language, sexual orientation, nationality, religion or ability) are recognized and regarded as assets for teaching and learning.”

The framework is further broken down into a three-year roadmap.

In the first year, districts are to raise awareness through workshops for teachers and administrators, among other goals, as well as hold forums on CR-S education. The second phase, meant to “build capacity,” includes utilizing state-provided tools to audit educational materials and district policies, such as hiring and student placement.

In the third year, “full implementation,” districts are to continue community dialogue while assessing their schools’ needs regarding equity.

Sagrario Rudecindo-O’Neill, the Beacon schools’ assistant superintendent of curriculum and student support, says the three-year plan is designed to ensure the district’s curriculum is “reflective of the families that we’re serving.” A district-wide equity committee has been formed, with parents filling in smaller working groups. School officials are also analyzing student assessments to pinpoint needs that could be linked to language disparities or other equity-related shortcomings.

Ten of the 13 districts in Dutchess County have become members of the new Dutchess BOCES Center for Educational Equality and Social Justice, which facilitates workshops such as the ones Hunter held in Beacon last month, although they were sparsely attended, and a series of upcoming seminars on the role of women as educational leaders.

Meredith Heuer, the president of the Beacon school board, credits Superintendent Matt Landahl with taking on equity upon his hiring in 2017. After a group of stakeholders began discussing the ideal attributes of a Beacon High School graduate, “Matt developed a professional development plan that directly addressed the four principles outlined in New York’s CR-S framework,” Heuer said. “It was great for us because it reinforced that we were on the right path and that there would be support, hopefully including financial, coming from the state.”

Similarly, Rudecindo-O’Neill noted that the principle includes seemingly small details, like translating signs on campus into different languages. “When we talk about equity, we’re looking at equity not being an initiative but being embedded,” she said.

A Beacon curriculum committee is reviewing books and other materials to see whether educational “stories” are representative of the schools’ diverse student body. That’s not new — most districts evaluate curriculum every five years — although the lens of representation may be.

Most learning theory is taught through the traditional perspective of the able-bodied, white American, Hunter explained. But “if you don’t fit that category, then there’s no space to talk about how you learn. Race and class matter when it comes to learning,” he said. “How do we make certain that what we’re teaching is reflective of our American society and our local community? That’s going to require us to shift how we think about this stuff.”

Rudecindo-O’Neill is quick to point out that Beacon isn’t going rogue.

“Everything we’re doing is based on New York standards and framework. That sometimes gets twisted,” she said. Although curriculum may be adjusted, “it’s not about rewriting history. We would never do that. It’s about showing all of history. It’s not excluding or changing or subtracting; it’s adding.

“If you were only given one perspective,” she asked, “is that really history?”

What they all agree they’re not pushing is “critical race theory” (CRT), which has been in the news this year because of allegations by parents and conservative politicians that it is being taught in public schools. As an academic concept, CRT is more than 40 years old; its basic construct is that racism is not only about individual bias but is also embedded in the legal system and that history must be evaluated under that rubric.

Critics, however, maintain that CRT urges intolerance against white people and have conflated the theory with terms such as “anti-racism” and “social justice.”

One organization, the Heritage Foundation, in a 2020 report attributed everything from Black Lives Matter protests, LGBTQ clubs in schools and diversity training in federal agencies to CRT. “When followed to its logical conclusion, CRT is destructive and rejects the fundamental ideas on which our constitutional republic is based,” the group said.

In June, parents and residents in Carmel took over a school board meeting, accusing district officials of promoting CRT, anti-police sentiments and Black Lives Matter, which one person dismissed as a “a Marxist, domestic terrorist group.”

Yet “CRT has nothing to do with K-12 pedagogy,” said Rudecindo-O’Neill. “I don’t know how it got linked to diversity and inclusion.”

Landahl said the pushback has made some Beacon teachers reluctant to buy into the state’s culturally responsive plan. “They see the news,” he said. “We try to — I hate to use the ‘P’ word — take politics out of it. It’s not about that. It’s about addressing standards and creating educational spaces that reflect the diversity of our community.” (Landahl said none of the district teachers involved in implementing the curriculum was comfortable being interviewed, citing the politically charged environment around the topic. The superintendent noted that he fully supports the teachers’ decision.)

Landahl and Rudecindo-O’Neill pointed out that 20 years ago districts didn’t have many choices for books and other materials. If the dominant publisher didn’t carry books written for or including alternate perspectives, schools didn’t get them.

However, close to 40 percent of Beacon’s population is Black, Latino or of another nonwhite ethnicity, according to census data. In addition, about 30 percent of the school district’s students are considered “economically disadvantaged.”

“If we’re not trying to address that diversity in our teaching, then we’re failing the entire student body,” said Heuer.

8 thoughts on “A Shift in Thinking”