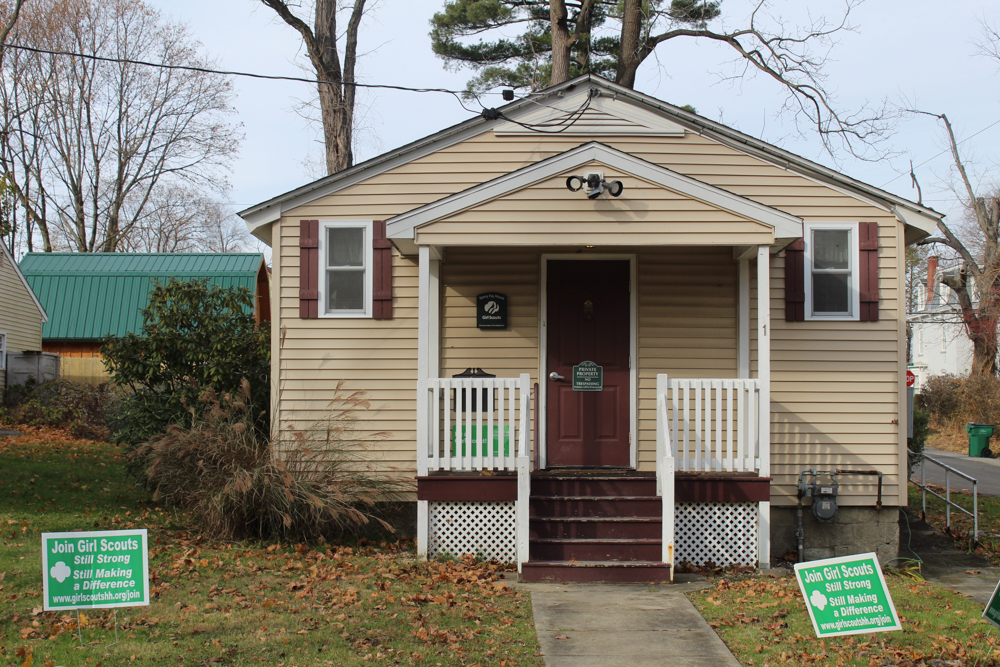 Girl Scouts in Beacon have used the Fanny Fay house for meetings since 1937. (Photo by L. Sparks)

The longtime meeting space for Girl Scout troops in Beacon is on a list of properties that will be put on the market by the parent organization, which is looking to shed houses and outdoor camps and shift savings to other locations.

The Fanny Fay House, at 1 John St., is named as one of the properties that Girl Scouts Heart of the Hudson could “exit” in a long-term plan compiled by a real estate consultant. The organization represents scouts in Dutchess, Putnam and five other counties in the Hudson Valley.

Built as a barracks for Civilian Conservation Corps workers, and owned by the Girl Scouts since 1937, the one-story building was used 120 days in 2019, costing $3,200, according to the report. The building also needs an estimated $38,000 in upgrades, including air conditioning, a new bathroom and repairs to both its flooring and Americans with Disabilities Act ramp, the study said.

Rhonda Altonen, who leads two Beacon troops that meet weekly at Fanny Fay, says she was surprised to see the building on the list of properties to be sold but has started searching for alternative spaces. Altonen, who met at Fanny Fay as a Scout in the 1970s and 1980s, happens to live three blocks from the building.

“There are so many alumni Girl Scouts who live in Beacon still and have that experience of using Fanny Fay,” she said of the building, which was named to honor the late Fanny Fay Morrison, whose husband supported the Girl Scouts in Beacon.

Fanny Fay is among five Girl Scout houses identified in the study as properties that could be sold. The list includes two camps: Ludington, a 150-acre facility in Holmes that needs an estimated $1 million in upgrades, and Wendy, a 56-acre site in the hamlet of Wallkill in Ulster County that needs a $900,000 investment. The organization would also move out of its Poughkeepsie service center. Another service center, in Pleasantville, is in contract to be sold.

Jennifer Donohue, a representative for Girl Scouts Heart of the Hudson, said the organization plans to reinvest sales proceeds into renovations at other facilities, including two camps, Addison Boyce in Tomkins Cove and Rock Hill in Mahopac, and houses in Larchmont and New Rochelle.

Membership in the Girl Scouts, both locally and nationally, has been trending downward for years. The regional chapter had 21,500 members in 2016 but that has fallen by nearly 50 percent, to about 11,000.

Phoebe North said she has boosted membership in New Paltz but has struggled to find places for her troops to meet. Her girls, largely unable to use Camp Wendy in Holmes because of renovations, met briefly at a park pavilion until people resumed reserving it for events, she said.

“Yesterday, we showed up at the Elks lodge and it was the middle of their chili cook-off,” she said. “I had to take the 10 girls and figure out what else to do.”

One thought on “Longtime Beacon Scout House May Be Sold”