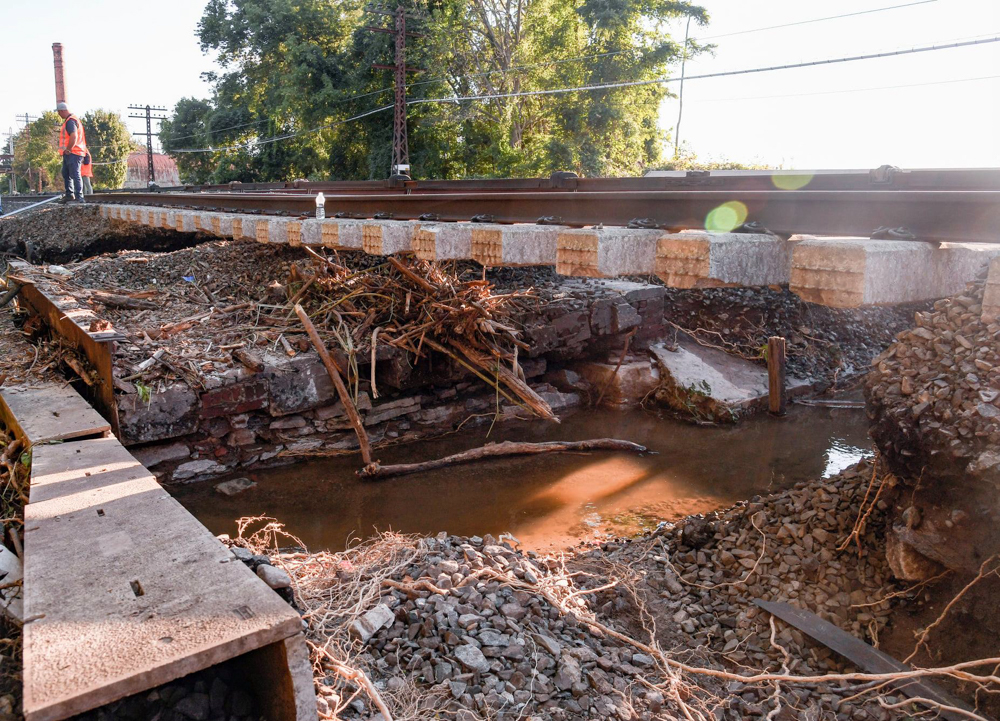 Metro-North is still repairing damage to its tracks from Hurricane Ida. (MTA)

Philipstown teenager Leo Horton has strong opinions about the on-time performance of Metro-North.

The Masters School sophomore and Garrison resident has been commuting by train since he was in seventh grade. Speaking about his recent frustrations with Metro-North, Horton said he “cannot remember the last time the train got here on time.”

Not only has his train been consistently late, but on multiple occasions when returning home, he has missed, at the Croton-Harmon station, his connecting train to Garrison.

“My parents end up picking me up in Croton-Harmon, which sometimes doesn’t work because they are both working,” he said. “There have been a number of times where I’ve had to pay $30 for a taxi ride home.”

Amid the COVID-19 pandemic, Metro-North Railroad, a part of the Metropolitan Transportation Authority, has had a number of schedule changes. Whether it was from the lack of riders or damage from Hurricane Ida in September, the commuter railroad had to adapt its schedule to fulfill its promise of on-time performance.

No Fare Hikes for Metro-North

Fares for Metropolitan Transportation Authority’s buses and trains, including Metro-North, will remain unchanged for the immediate future, Gov. Kathy Hochul said on Nov. 15.

The $1.2 trillion infrastructure bill signed by President Joe Biden includes $11 billion for the MTA, which will allow the agency to delay fare hikes and cancel service cuts planned for 2023 and 2024, the governor said.

In an interview, Metro-North President Catherine Rinaldi said the railroad, whose Hudson commuter line includes stops in Garrison, Cold Spring and Beacon, has had to make difficult decisions regarding the train schedule.

The number of customers plunged in the first months of the pandemic. Ridership totaled 13,600 on April 1, 2020, a month into the pandemic. That was 95 percent below the average ridership for that day in 2019. The MTA introduced an “essential service plan” on March 27, 2020, reducing the frequency of trains on the Hudson Line to hourly amid a statewide shutdown.

In August, Metro-North announced that weekday service on the Hudson Line had been restored to 82 percent of its pre-pandemic levels and weekend service to 100 percent as schools neared reopening and workers returned to offices. But while the number of customers had rebounded to 132,200 as of Nov. 15, ridership was still down by 50 percent.

Then, on Sept. 1, Hurricane Ida hit the area as a tropical depression, bringing record-setting rain. The destruction to tracks included mudslides at stations near the Hudson River, such as Glenwood and Greystone in Yonkers. Additionally, a culvert was washed out near the Dobbs Ferry train station. As a result, the Hudson Line was shut down for days, frustrating commuters. When the line reopened, trains operated on a reduced schedule as track repairs continued.

Permanent repairs will take months to complete, Rinaldi told the MTA board in October. Going forward, Metro-North will be more prepared for storms like this, she said.

“We’re looking at our infrastructure along the Hudson Line in the Bronx and other areas around our territory, to see what we might need to do to be able to protect it from rain events like this one,” she said.

Horton is not the only student with strong opinions regarding the commute on Metro-North. Garrison resident Arjun Bagaria, another Masters student, said he has also experienced delays when switching at Croton-Harmon.

“Even when the train is 10 minutes late [usually on the way home], I get to Croton-Harmon 10 minutes later, which just makes my commute even longer — not to mention, the added stress of missing my connecting train to Garrison.”

Love it or frustrated by the service, Metro-North provides critical transportation to those of us who live along the Hudson River. That the service may change during storms is necessary for the commuter line to work, but it may not be enough to satisfy customers.

Zuckerman is a member of The Current’s Student Journalists Program. Her father, Neal Zuckerman, represents Putnam County on the MTA board.