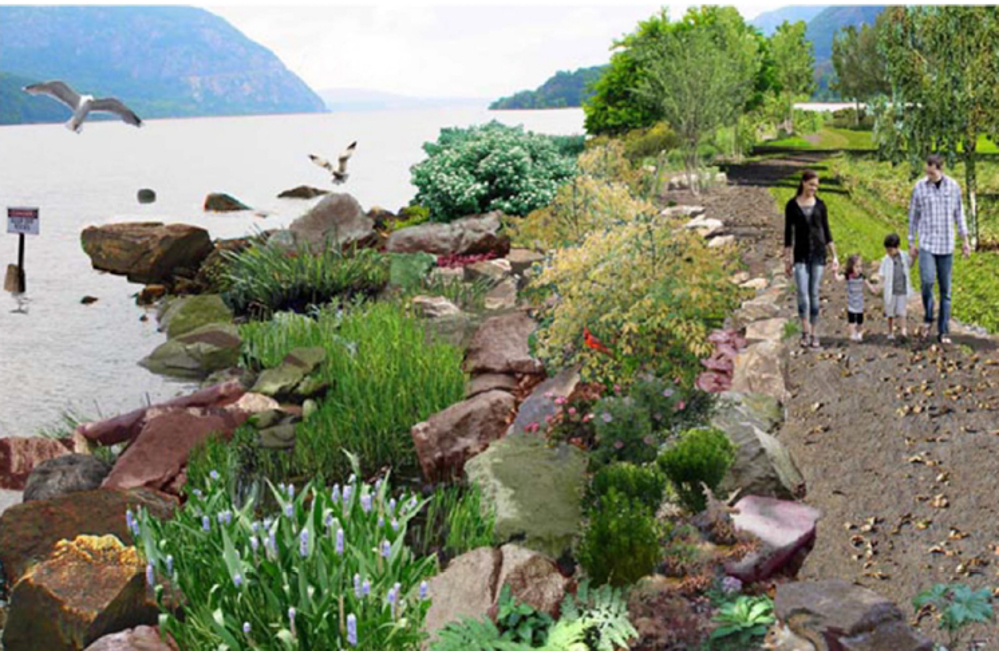 This rendering envisions the shoreline at Dockside Park in Cold Spring once construction is completed next year. (Milone and MacBroom)

The badly eroded shoreline at Dockside Park in Cold Spring is about to undergo major rehab, a project that could offer guidance to other riverfront communities facing rising water levels associated with climate change.

The 26-acre open tract is part of the Hudson Highlands State Park but has been managed by the Village of Cold Spring since 2018. That management has been limited to mowing and cleanup; the park has no facilities and the village cannot add any without state approval.

Tom Alworth, executive deputy commissioner with the state parks department, said the project’s design “reflects the potential for sea-level rise [from the Hudson River estuary], while protecting the viability of both natural habitat and this important park.”

Shore protection does not come cheap; the project is projected to cost the state about $1.86 million. Cold Spring is not required to contribute.

Coyle Industries, the general contractor selected by the state, is expected to start work this month. It will begin by removing rip-rap, wood pilings and concrete debris from the shoreline, as well as driftwood and unwanted vegetation.

After terraced regrading, slopes and boulders will be installed to stabilize the bank, and native vegetation, including river birch, gray dogwood, grasses and sedges, will be planted to reduce erosion and create habitat for species such as killifish, mommichog and shad.

The combination is designed to stabilize the bank during high water and storms, which climate change will make more frequent, explained Brian Nearing, a representative of the state parks department. “The sloped shore will allow shallow and intertidal areas — important habitats in the Hudson — to expand upward as sea level rises.”

The design also allows for an expected increase in flooding and the continuing erosive force of waves, current and ice, he said.

“A ‘normal’ storm event today will become a flooding 50 years from now,” she added.  “Recent history has shown an increase in the number and intensity of severe weather events.”

Work is expected to be completed by the end of September and will include a new ramp for nonmotorized boats and a gravel walkway. Because the park is relatively small, Nearing said it will be closed to the public at times.

The state funded the initial design work eight years ago as a shoreline protection demonstration project. In its earliest stages, in January 2014, a team of designers from three firms met with about 25 residents at the Cold Spring firehouse to describe their plans.

6 thoughts on “Dockside Shoreline to Get Major Rehab”