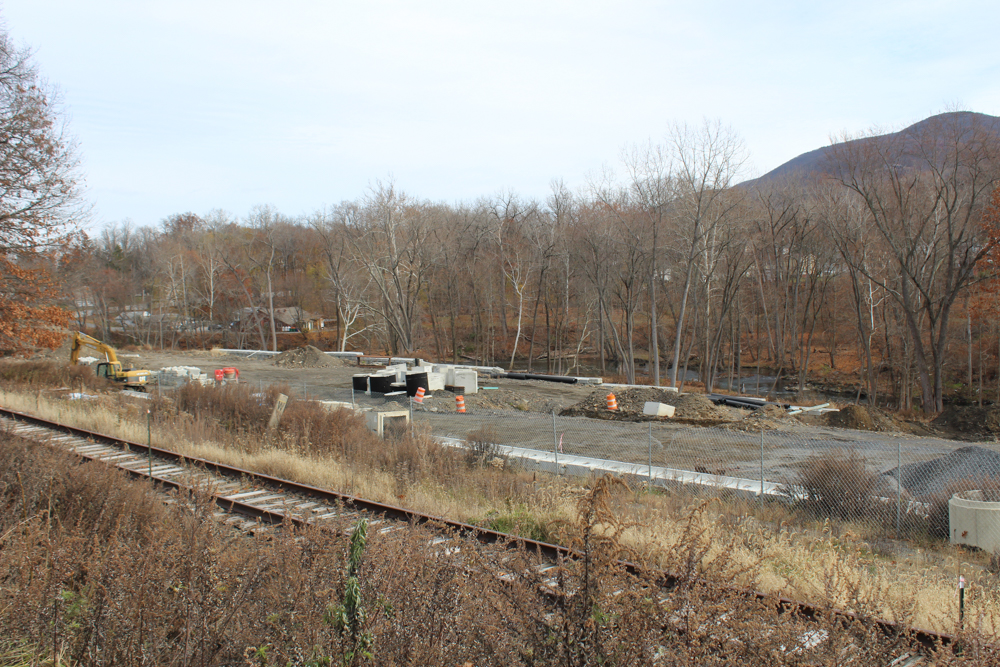 The developer of a mixed-use project off Tioronda Avenue along Fishkill Creek is fighting in court over land it owns but leases to another developer. (Photo by L. Sparks)

Two Beacon developers are battling in court over their rights to a property along Fishkill Creek that one of them owns and the other leases under a 99-year agreement signed in 2002.

On one side of the divide is Beacon 248 Holdings (aka 248 Beacon Holdings), whose principal is Bernard Kohn. On the other is Sisters Properties LLC, whose managing member is Merkourios Angeliades.

Beacon 248 owns both the leased parcel and an adjacent property to the north where it is building 64 apartments, in two buildings, and 25,400 square feet of commercial space along the western edge of Fishkill Creek after receiving approval for the project last year from the Planning Board.

On the south side of the leased parcel is a property belonging to Sisters Properties, which says it wants to build a three-story apartment building.

Under a 2002 agreement struck by the previous owners of the three properties and lasting until May 31, 2101, Sisters is allowed to use the leased parcel “for any lawful purpose, including and limited to providing landscaping, parking and an entrance” to its development. As part of the lease, Sisters is supposed to pay a share of the taxes on the property.

The agreement also gives Beacon 248 the “unimpeded right to pass through and across the leased premises for ingress and egress” to its project site “without the necessity of consent” by Sisters.

In May, Sisters sued Beacon 248 in Dutchess County Supreme Court, accusing Beacon 248 of using the leased property as a dumping ground for its construction equipment and debris, and for parking, in violation of the lease agreement.

The developer also alleged that Beacon 248 plans to install utilities and other infrastructure that will “encroach” on the property, and that it may be trying to pressure Sisters into renegotiating the 99-year agreement or to “bring down the value and usefulness” of the land so it can purchase the Sisters-owned parcel.

Along with Beacon 248 Holding, Kohn also owns 344 Main St. and headed the development group that purchased the Craig House estate in 2017.

On Oct. 26, a Supreme Court judge ruled for Sisters, writing that while Beacon 248’s use of the empty center parcel for storage and parking does not “appear to have any significant impact” on Sisters, it “does not comport with the projected use” of the property as a gateway to each of the two properties. He ordered Beacon 248 to remove its construction equipment and the debris.

Beacon 248 has appealed, writing that the 2002 agreement allows it to make alterations to the leased property, including for “staging and construction purposes.” It also alleges that Sisters owes $41,000 in unpaid taxes.

“There is absolutely nothing that will interfere with the Sisters’ ability to construct a parking area … when and if they have a project approved and constructed on the adjoining property,” Beacon 248 said in its filing.

One thought on “Lease — and Land — Divides Beacon Developers”