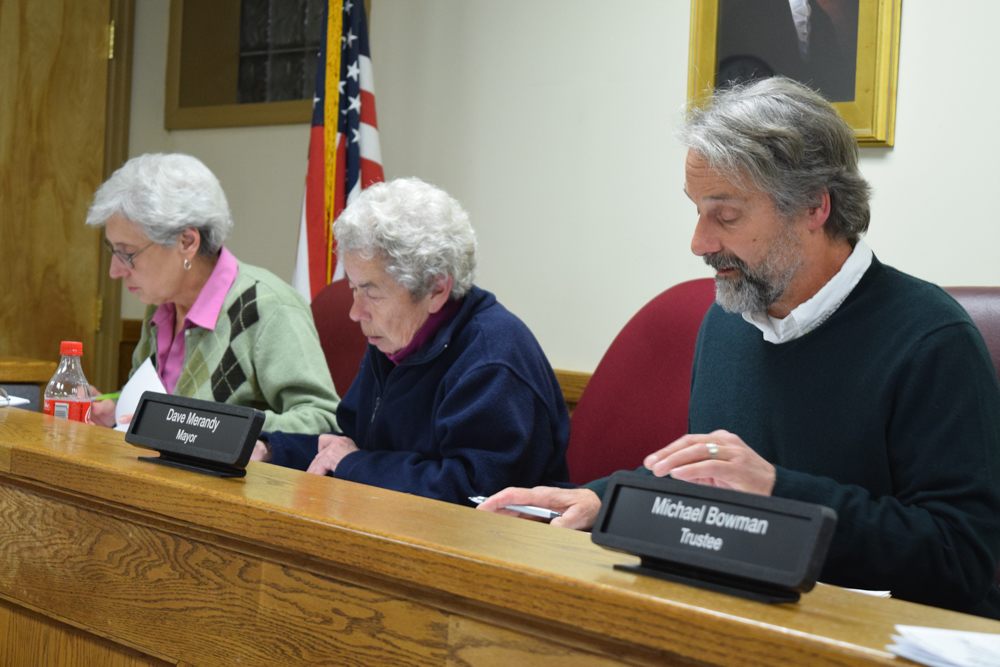 Murphy, Early and Merandy at their first board meeting in April 2015 (File photo by M. Turton)

I’ve paid attention to municipal elections for about 50 years. My theory is that being elected mayor or trustee in a little village like Cold Spring is actually very exciting — for about 12 hours, starting on election night.

Then it’s mainly dog work. Long hours. Little pay. Even less recognition. Potholes. Trash pickup. Meetings galore, and a lot of sentences, beginning with the word whereas. Plus, the nervous feeling elected officials get when entering Foodtown, wondering who will approach them, irate over a neighbor’s fence that’s 2 inches too tall.

Ah. The joys of elected office.

Joy has been scarce at Village Hall lately. Too often, I’ve written about clashes between the outgoing mayor and the mayor-elect, which is even more unsavory because they’re both friends of mine.

Ah. The joys of being a reporter in a small village. I’ll leave it to village historians to one day figure out the real source of all that rancor. It wasn’t black and white.

But this isn’t about that. It’s about a milestone election and three elected officials who leave office on Monday (Dec. 6).

Unless proven wrong, this will be the first time in village history that an incoming board will feature no one born in Cold Spring/Philipstown.

There’s something sad about that, but it was inevitable once Metro-North began commuter service along the Hudson in the 1970s. Demographics evolve, and for Cold Spring, the change was rapid once it became an easy train ride to New York City.

It’s also worth noting that Mayor-elect Kathleen Foley will be just the third woman to serve in that position since the village was incorporated in 1846. Barbara Impellittiere-Flowers held the office from 1973 to 1976, and Antonia Garufi in 1989 and 1990.

The three terms served by Mayor Dave Merandy and Trustees Marie Early and Fran Murphy have been remarkable.

No doubt they anticipated challenges such as how to pay for a new dump truck. But they probably didn’t foresee national, international and even global issues on their agenda.

The hiring of Scott Morris as a Cold Spring police officer touched off local protests in the aftermath of the murder of George Floyd, an unarmed Black man, by Minneapolis police. Morris was with the NYPD when an officer he supervised killed an unarmed Black man. Morris acknowledged the incident when interviewed by the Village Board. All five members were adamant it was a good hire. But when rhetoric became heated, and they believed violent protest was a possibility, the board accepted Morris’ resignation. They put public safety ahead of their egos.

They tackled short-term rentals, passing a law to regulate them, recognizing that unchecked STRs could be an insidious problem that can damage the fabric of a community, as it has in several countries. They didn’t bow to the loudest voice in the room, the STR owners. They seemed motivated to act on behalf of all residents.

Who knew that a Village Board would also have to cope with a global pandemic? Merandy, Early, Murphy and other trustees helped create public dialogue about COVID-19 at well-attended Zoom meetings. They partnered with the Chamber of Commerce on pandemic safety signage, closed parks and Village Hall to visitors and ended big events. They helped reassure residents at a stressful time.

Local issues weren’t easy either. They were the first to tackle Cold Spring’s parking problem in a comprehensive manner.

They addressed too many issues to name, often aided by volunteer committee members, but were the majority on the body ultimately responsible for making things happen — from Main Street and sidewalk improvements and the Police Department review to negotiating a new Boat Club lease and possible privatization of garbage collection.

Let’s not forget the all-but-complete updating of the village code, a tedious task that revamped more than 500 pages of laws affecting virtually every aspect of village life.

It wasn’t just what Merandy, Early and Murphy did; it’s how they did it. They got their hands dirty.

It was normal to see Merandy painting village sidewalks, placing brick around tree pits, serving as a parking attendant at a special event or lending his carpentry skills to village projects.

During the Main Street project, Early was a daily presence, working with the contractor, no doubt keeping his feet to the fire. She got to know every comma in the village code and can likely recite the document by heart. She walked the village, measuring each and every parking space.

Murphy will probably keep blasting out notices to residents until the last hour of her term. The village clerk will miss her willingness to fill in for him when he needs a day off. The entire village office will miss her coming in, often, to help with whatever had to get done.

Oh. And they organized Community Day.

They didn’t do it alone. They had help from other trustees, volunteers, committee members and family.

But they did a lot. Their pay, based on hours worked, would make minimum wage look good.

Years ago, I covered the mayor when he was president of the Haldane school board. My first headline about him read: “Merandy Storms Out of Meeting.”

I think I’ll call him, ask if he’ll grant me a pardon before he leaves office.

2 thoughts on “Reporter’s Notebook: A Changing of the Guard in Cold Spring”