The Beacon High School boys’ basketball team had a lopsided, 75-34, home win on Tuesday (Dec. 7) over Valley Central. After going 1–11 last season, it was just the second win for the team in two seasons.

“Sometimes you play down to an opponent, and we didn’t do that,” said Coach Scott Timpano. “We kept our foot on the pedal. We had all 12 players score. They need to see what winning feels like.” 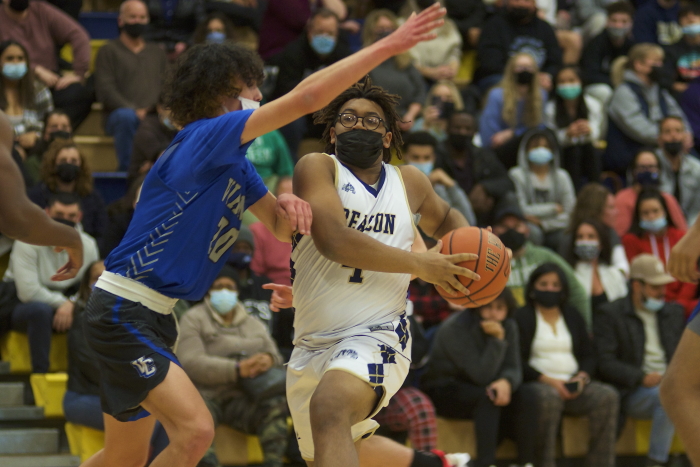 Darien Gillins led the Bulldogs with 13 points, while Adrian Beato had 10 and Jason Komisar and Jack Antalek each added nine.

“Adrian Beato gave us some great minutes,” Timpano said. “We also got great defense from Gavin LaDue, and Jamel Sellers-Blackwell came up strong with five rebounds and two steals.”

The Bulldogs fell last week at Pine Bush, 61-53. Chase Green and Jack Philipbar each scored 13 points, Gillins had 12, Sellers-Blackwell had seven and Komisar had 11 rebounds.

“We came back from 16 points down and got their lead down to two points in the fourth quarter, but then they hit two 3-pointers,” Timpano said. Nevertheless, “we saw some good things against a good team.”

Haldane won its first game of the season on Dec. 2 behind 18 points from Matteo Cervone and 16 from Tristen Reid, edging Alexander Hamilton on the road, 67-64.

“It was an up-tempo, intense game,” said Coach Joe Virgadamo. “It was a loud crowd, a fun atmosphere, and the win gave the team some confidence.”

“Holmbo and Irwin were both impressive,” Virgadamo said. “The football guys came in late from their season, but they’re playing well.”

Two days later at Washingtonville, the Blue Devils came up short, 87-65. Cervone and Will Bradley each scored 25 points and Holmbo added nine.

Haldane was up by three points after the first quarter but Washingtonville pulled away. The closest the Blue Devils got in the second half was nine points. Washingtonville shot 58 percent from three-point range.

“That was a good start to the season for our freshmen and sophomores,” said Coach AJ McConville.

The Beacon boys’ and girls’ bowling teams each lost to Kingston, 7-0, on Tuesday (Dec. 7) following wins last week over Roosevelt. Against FDR, the Bulldogs were led by Daniel Gilleo and William Hockler, and the girls by Cadence Heeter and Vanessa Campanelli. The Bulldogs were scheduled to compete against FDR again on Thursday (Dec. 9), Saugerties on Dec. 14 and Goshen on Dec. 16.