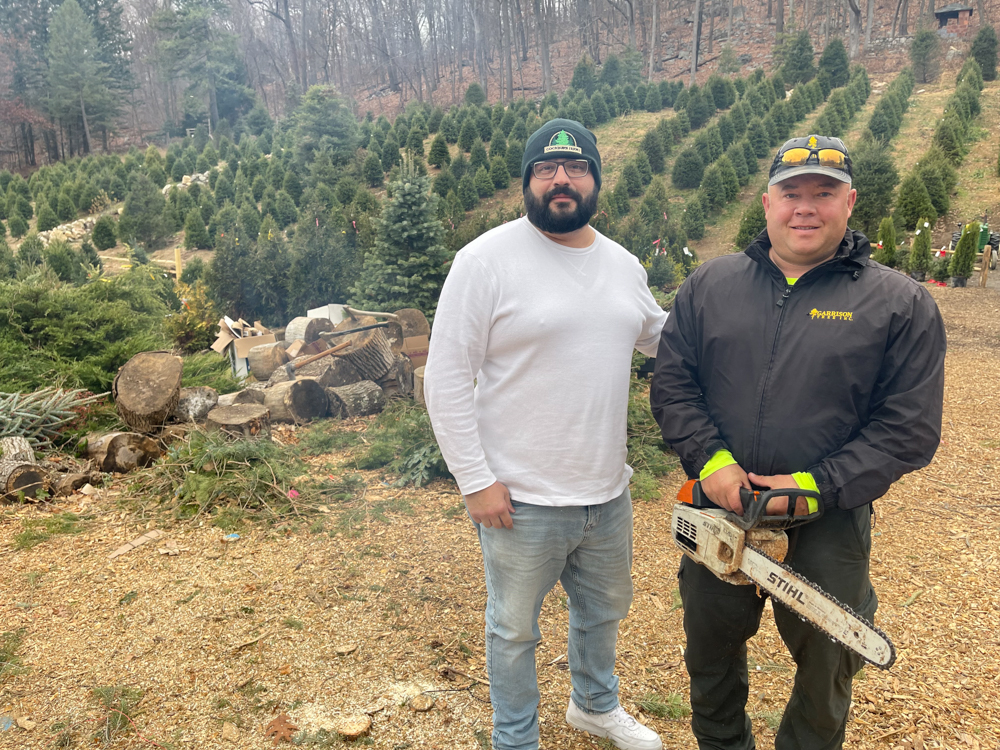 Sean Barton and Josh Maddocks operate Cockburn Farm in Garrison, where customers cut their own trees. (Photo by J. Asher)

The pandemic, drought, forest fires and a supply chain mix-up have thrown the Christmas tree business into turmoil this year in the Highlands. Prices are up. In some cases, supply is down.

For the first time in 50 years, the Beacon Engine Co. No. 1 at 57 E. Main St. had no trees to sell for its annual fundraiser, said Frank Merritt, the president of the company. The cause was a supply-chain mishap with the supplier in Vermont. “He didn’t have enough trucks to make deliveries,” Merritt said.

At Vera’s Marketplace and Garden Center on Route 9 in Philipstown, co-owner Dominic Giordano said on Thursday (Dec. 9) that he received only 270 trees this year, compared to 370 in the past, although he didn’t blame COVID-19 or the supply chain. He said his Canadian supplier underplanted several years ago.

However, as in 2020, demand is higher because of the pandemic — “Everyone was home and they had to have something to do,” so they bought Christmas trees, said Giordano. In addition, he said, prices are up 30 to 40 percent for cut trees, mostly due to increased shipping costs.

Sean Giles, owner of Sunny Garden Greenhouses in Wappingers Falls, said on Wednesday that he had only 15 trees left. He said his wholesaler was the victim of a drought several years ago, which has lowered stock since.

Giles said that higher labor and freight costs on cut trees have driven up his prices this season by 10 percent to 20 percent. He’s charging up to $79 for a 7-to 8-foot Balsam fir and up to $120 for a Fraser fir.

He said he believes the pandemic had an indirect effect on demand because of the influx of first-time tree buyers who moved to the area from New York City. “They now have room for a tree,” he said.

Joe Cardella, owner of BJ’s Christmas Tree Farm in LaGrange, has also seen high demand and expects to sell out early. “I certainly will not be open for the entire season,” he said.

Josh Maddocks and Sean Barton, who operate Cockburn Farm in Garrison, where customers cut down their purchases, also said sales have been strong, which Barton attributed in part to the pandemic, which “brought back family values.” 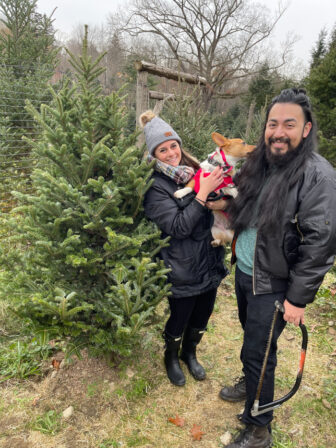 Brittny Tomaselli and her friend Ariz Carpinteyro cut their own tree at Cockburn Farm in Garrison. “I look forward to this every year,” she said. (Photo by J. Asher)

Gene Knudsen, president of the Christmas Tree Farmers Association of New York and the owner of Balsam Ridge Christmas Trees in Ulster County, said there doesn’t seem to be any acute shortage statewide, especially for cut trees that can be trucked in from elsewhere.

His own sales have been on track with last year, he said, which he remembered as “exceptional.” But he said forest fires in the Pacific Northwest have had a ripple effect nationally on supplies.

Back at Cockburn Farm in Garrison, Brittny Tomaselli, 30, of White Plains was making sure to buy early. She visited last week with her friend Ariz Carpinteyro, 31, of the Bronx, and her dog, Baxter. “I look forward to this every year,” she said. “I wanted to uphold the tradition.”

She and Carpinteyro settled on a 5½-foot Fraser and cut it down with a saw provided by the farm. “I like a smaller tree,” said Tomaselli. The cost? $225.

2 thoughts on “What? No Christmas Trees?”