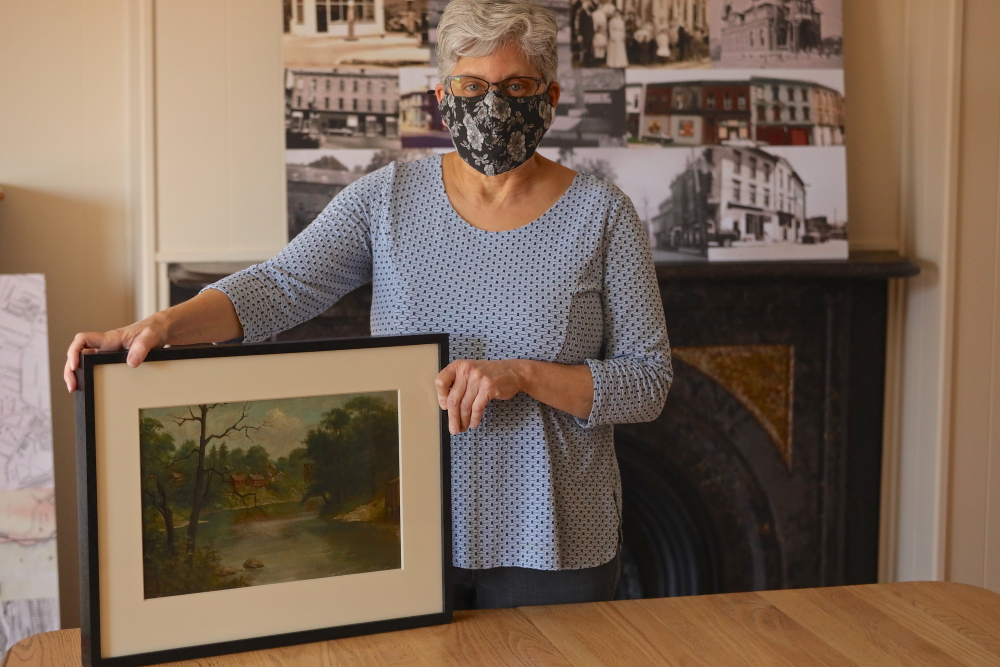 Diane Lapis, the president of the Beacon Historical Society, shows off a recently donated painting of Fishkill Creek by Ella Ferris Pell. (Photo by Ross Corsair)

Society relocates from one former rectory to another

Just like the city it documents, the Beacon Historical Society is on the move.

The latter began its life during America’s bicentennial in 1976 at the Howland Public Library, before spending 20 years packed into a 225-square-foot room at the Howland Cultural Center. It has always needed more space to house an extensive collection, ranging from maps, documents and postcards to school desks, artworks and products produced during the city’s industrial heyday.

In 2017, after a search which took years, the BHS found some breathing room on South Avenue, moving into the 2,000-square-foot former rectory of St. Andrew’s Episcopal Church. 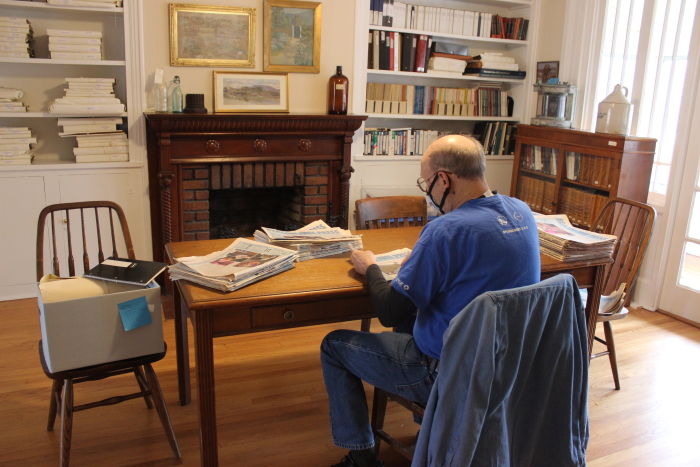 Gary Flynn, a volunteer, organizes newspapers for the BHS archives. (Photo by A. Rooney)

Moving again was not in the society’s immediate plans but, out of the blue, the nonprofit’s board was approached by St. Joachim’s Church at 61 Leonard St., off the east end of Main Street near The Roundhouse, about renting its rectory, which had been occupied by the Franciscan brothers.

“The church invited us to consider moving here with a great offer” for a 10-year lease, says Diane Lapis, the society’s president. “Now we have 12 rooms: seven workrooms and five public rooms, plus the kitchen and bathroom and an accessible ramp and accessible bathroom.”

“When people come in this building, they’re astonished,” she says. “It’s so perfect for us on every level. It’s an amazing opportunity for us and the city.”

In 1957, a 12-year-old aspiring artist in Beacon named Dan Dakotas was delivering the Beacon Evening News to earn money to buy supplies and tickets to the Metropolitan and the Frick museums in Manhattan. One day, at a tag sale on South Avenue, he spotted a painting titled Looking West from the Matteawan Bridge. Recognizing his great-grandmother Ellen Klanka’s house in the background, he paid $4 for it. 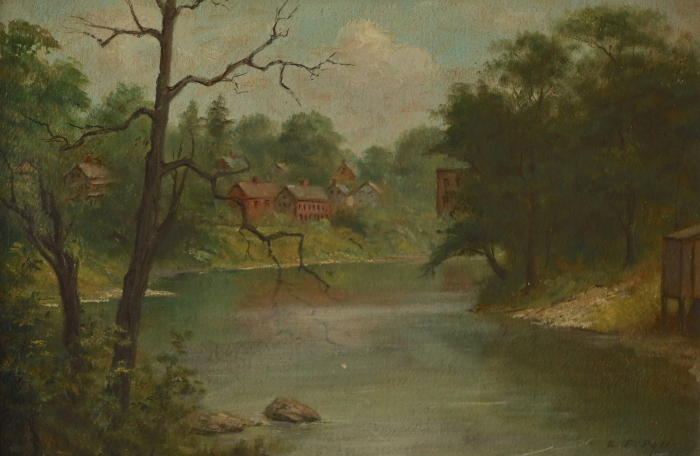 Looking West from the Matteawan Bridge

The painting has resided in his Kansas home for more than 50 years; last year, his wife, Ruth, decided to research its origins. She discovered the artist was painter, sculptor and illustrator Ella Ferris Pell, an 1870 graduate of the Design School for Women at Cooper Union who later studied at the Académie des Beaux-Arts des Champs-Elysees in Paris.

Salome is in the collection of the Crocker Art Museum in Sacramento, California.

Her most important painting, Salome (1890), which depicts the dancer who demanded the execution of John the Baptist, was daring for its time.

Pell and her sister Evie lived in Beacon during the final years of their lives; first on South Avenue and then Ferry Street. Pell sold landscapes from her home or at local shops but died a pauper in 1922.

In the early 1970s a collection of her paintings, sketches, letters and journals was found in a home in Fishkill and donated to the Fort Ticonderoga Museum. She is buried in an unmarked grave next to her sister at Fishkill Rural Cemetery.

Earlier this year, Dan and Ruth donated Looking West from the Matteawan Bridge to the Beacon Historical Society, which one day hopes to provide an appropriate gravestone for this amazing local artist.

The society relocated in March and volunteers have been unpacking and organizing since. At the same time, “research has continued; we steadily get requests from around the world. Volunteers are helping run the building, and their numbers are growing: Recently, in just in two weeks we had 100 hours of service. We also have Brandon DiDiego, an intern from SUNY Cortland, working on our veterans’ collection.”

She said the society hopes to upgrade and increase the size of its archives, with more space for exhibits and programming, including for school groups. There is also far more storage than at the South Avenue site.

“We now have a map and deed room, an administrative office, a home for our extensive newspaper collection, a scanning room, a place for our Highland Hospital and Craig House collections, along with all our books, postcard albums, yearbooks and city directories,” Lapis says. “We’re bringing together a lot of things which used to be in separate places, sorting them and putting them into an online database.” 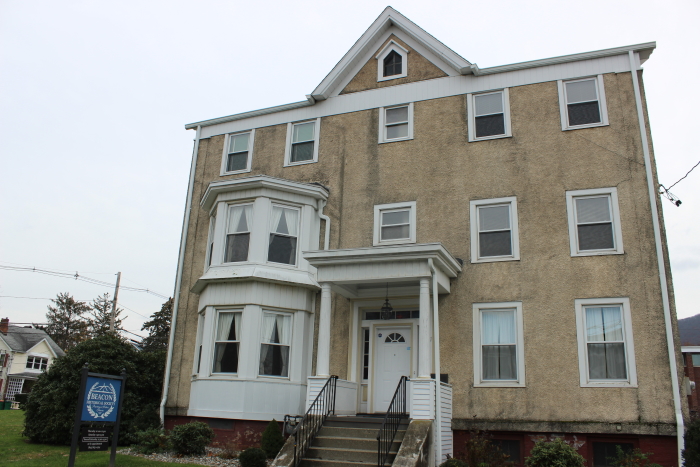 The new Beacon Historical Society headquarters (Photo by A. Rooney)

As in other locales, many people discover the BHS while researching the history of their home. “They usually ask if we have an old photo of their house, which we rarely have but sometimes can find by looking at photos of parades and other civic events. They want to know who lived there, when it was built and information on the structures on the property. In one instance, someone had to prove to the City Council that she did not build the shed on her property and we found evidence that the shed had been there for at least 150 years.”

The building will officially open on May 14 and be dedicated to Robert Murphy, the city historian and society president for two decades, who died in 2020. The event will also herald the naming of rooms for two pairs of benefactors: the Denny G. and Karen L. Meyer Galleries and the Arthur M. and Rita Johnson Library.

The first exhibition in the new space, Treasures of the Beacon Historical Society, includes highlights from its collection. There is also a display on local veterans, a holiday tree decorated with vintage ornaments, a 1920s dollhouse made in Beacon and decked out for the holiday, and a gift shop.

In an earlier version of this story, we stated that a painting by Ella Ferris Pell was created in the 19th century; in fact, it was painted in the early 20th century. Also, the society was invited to move to the former rectory at 61 Leonard St. by St. Joachim’s Church; the Franciscan brothers were the prior tenants but did not own the building.