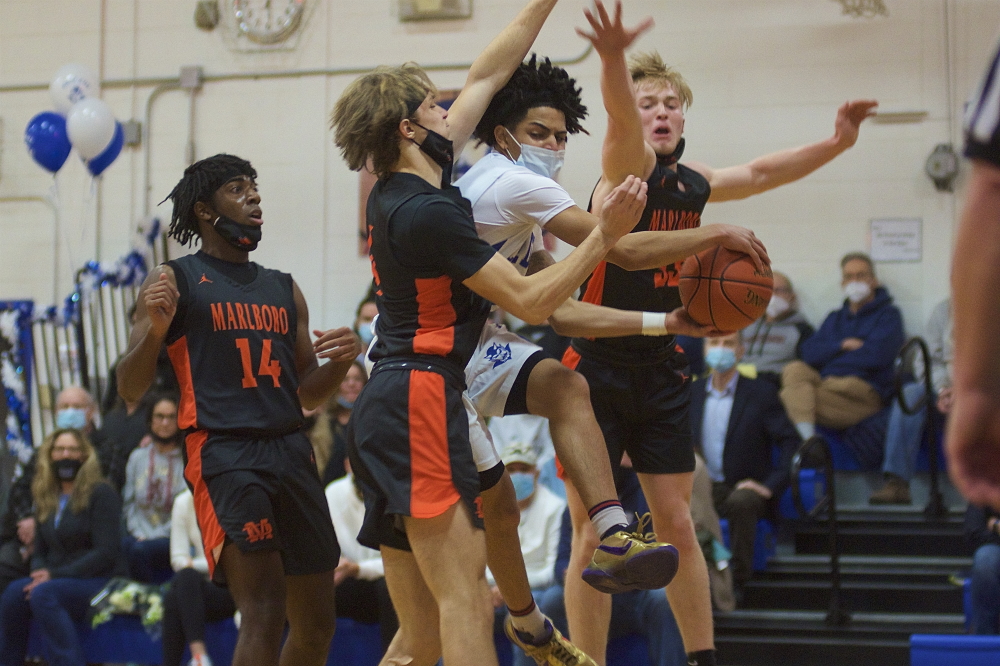 Haldane's Tristen Reid finds himself in traffic against Marlboro. (Photo by S. Pearlman)

Sometimes a win is just a win. Other times, a win can feel more like a transformative moment.

The Beacon High School boys’ basketball team is hoping its win over Port Jervis on Wednesday (Dec. 15) becomes the latter. 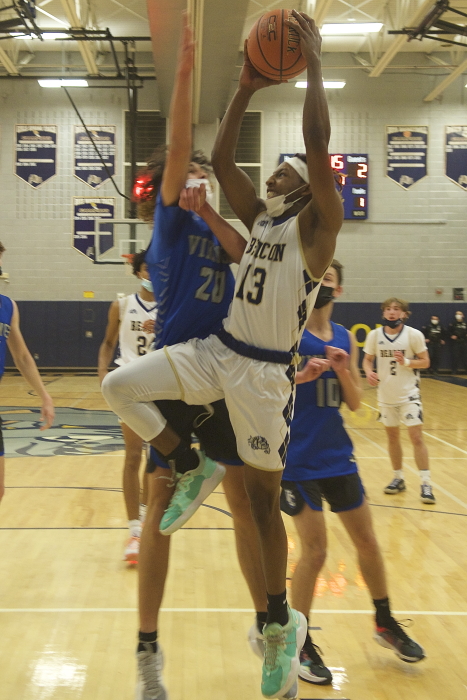 After the team trailed for the entire game, Darien Gillins hit a layup with 48 seconds remaining to give the Bulldogs a 53-51 advantage, which turned out to be the final score in what coach Scott Timpano called a “gritty” victory.

“We didn’t play our best basketball, but we dug in at the end,” he said.

Port Jervis scored the first 10 points of the game but Beacon closed its deficit to 34-31 at halftime. Port Jervis still led by five points at the end of the third quarter before the Bulldogs rallied.

Gillins finished with 13 points, Adrian Beato added 10 and Chase Green and Jamel Sellers-Blackwell each finished with seven. Defensively, Timpano noted, Jason Komisar had a block with 23 seconds left that may have saved the game.

After winning one game all of last season, Beacon (2-2) has won two straight.

“I am absolutely encouraged by the way we’re playing,” Timpano said. “We’re building something special. Part of learning how to win includes finishing games.” 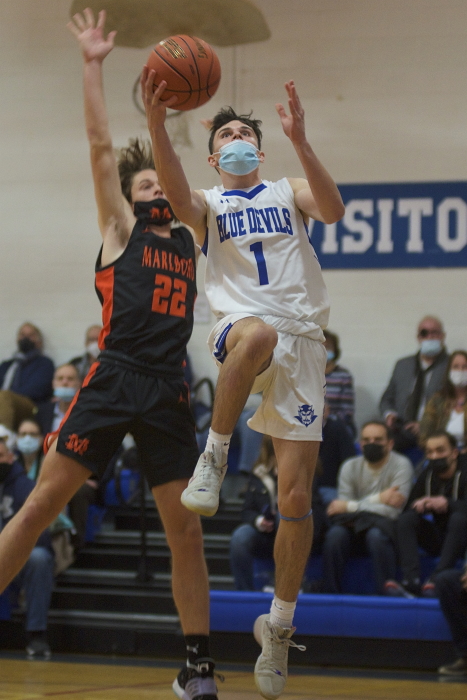 Ryan Irwin drives for a layup against Marlboro. (Photo by S. Pearlman)

Beacon was scheduled to visit Washingtonville on Tuesday (Dec. 21) and will compete in a 10-team holiday tournament beginning on Dec. 27 when they face Ketcham.

At Haldane High School on Tuesday (Dec. 14), a strong defensive effort, coupled with 13 points from Will Bradley, led the Blue Devils to a 69-48 victory over visiting Hastings. Ben Bozsik and Matteo Cervone each contributed 10 points.

“Our defense was phenomenal,” said Coach Joe Virgadamo, noting the team held Hastings to seven points in the first quarter. 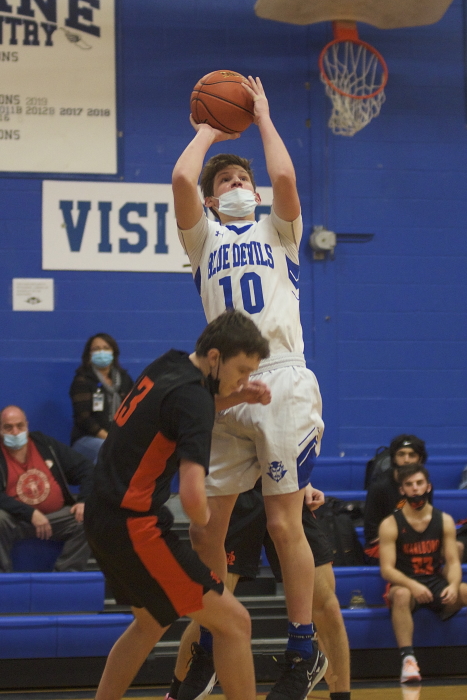 On Dec. 9 against Marlboro at home, Haldane trailed 25-14 after a quarter but cut the deficit to two at halftime and then played a strong second half to win, 73-65.

With three wins in four games, Virgadamo said the team is headed in a good direction. “We’re still working on [defensive] rotations, rebounding, offensive movement. We need to do more little things right.”

Haldane was scheduled to host Briarcliff on Thursday (Dec. 16), travel to Millbrook on Saturday (Dec. 18) and host Peekskill at 6:15 p.m. on Tuesday (Dec. 21). The game will be streamed online.

“We got a great defensive effort, overcame foul trouble and took care of the ball,” said Coach Christina Dahl. “Everyone contributed.”

The Bulldogs are scheduled to host Washingtonville on Monday (Dec. 20) at 5 p.m. and Cornwall Central on Tuesday at 4:30 p.m.

A lack of rebounding and poor defense hurt the Haldane girls at last weekend’s Mayclim tournament at Croton. The Blue Devils dropped their opener to Pearl River, 50-22, then fell to Croton-Harmon, 50-39, in the consolation game.

“We felt like we were ready to play,” said Coach Jessica Perrone. “But Pearl River came out strong and played aggressive and clean defense and out rebounded us. They took us out of our transition game.”

In Saturday’s game, the Blue Devils played well in the second half, Perrone said, but could not overcome an early deficit. “If we had played that way all game, we would’ve been good,” she said.

Chiera, who was named to the All-Tournament team, scored 12 points, while Camilla McDaniel added nine and Siegel recorded seven points and five rebounds. Perrone noted that Mairead O’Hara rebounded well for the Blue Devils and that McDaniel shut down Croton’s best player defensively in the second half.

Haldane (2-3) was scheduled to visit Carmel on Thursday (Dec. 16) and will travel to Peekskill on Wednesday (Dec. 22).

Beacon competed at the 31-team Jim Mitchell Invitational on Dec. 11 at The Armory in Manhattan, where Sal Migliore finished second in the 600-meter run in 1:26.60 and Rubio Castagna was fifth in 1:31.31. 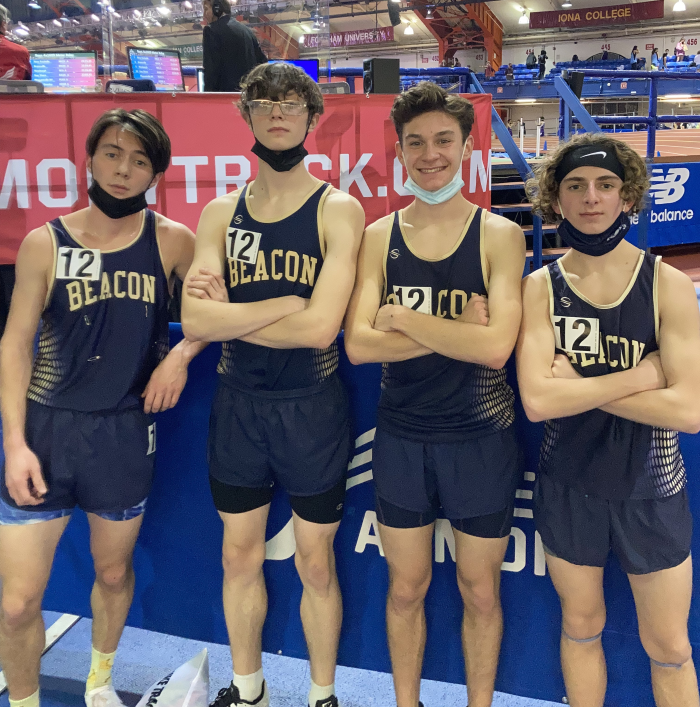 In the boys’ high jump, Beacon took three of the top six spots: LaBelle and Vermeulen tied for second at 5-3 and Andre Stackhouse was sixth. Damani DeLoatch took fourth in the boys’ triple jump with a leap of 40-5, the best jump by a sophomore in the state so far this year.

“It was great to be back at The Armory after a nearly two-year pandemic absence,” said Coach Jim Henry. He noted that sophomore Chelsea Derboghossian had impressed him with an eighth-place finish in the 300 meters and he thought Migliore will be contending for a sectional title in the 600 meters.

The Beacon girls’ and boys’ bowling teams both lost this week to Saugerties; the boys fell 5-2 and the girls 7-0.

Dan Gilleo led the boys with a 722 series, and Will Hockler had a high game of 245. The girls were led by Cadence Heeter with a 324 series and Vanessa Campanelli with a 290. Beacon was scheduled to face Goshen today (Dec. 17).

The Bulldogs will return to the pool on Jan. 10, hosting Red Hook.

Haldane players past and present gathered at the school on Nov. 27 for a friendly match. The event was organized on a sunny but cold day by coaches Ed Crowe and Peter Ruggiero.