When Grey Zeien, the former proprietor of Grey Printing in Cold Spring, sold the business in 2020 and retired, it gave him the opportunity to spend a lot more time doing what engrosses him: making art. 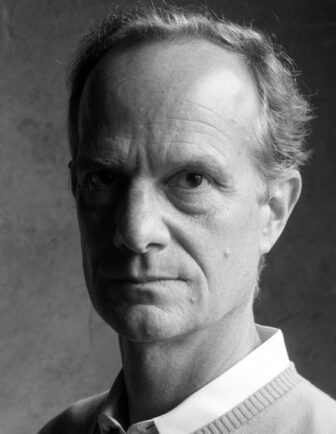 It’s not that Zeien had abandoned his art — he had a place at Bulldog Studios in Beacon for eight years and was a member of the Beacon Artists Union collective.

More recently, he says he has found a way to make art nearly every day, whether for 10 minutes or five hours, in a home studio. The Comix, an exhibit of his mixed-media paintings on panels, all related to comic books, will be on display at the Buster Levi Gallery in Cold Spring through Jan. 2.

Initially, Zeien says he thought he would miss running the printing business — which he sold to Kelly Guinan Preusser two days before New York went into pandemic lockdown — but he’s found that’s not the case.

“I’m glad to see it’s being run so well as it is,” he says. “Kelly went through a difficult time, a period matched only by the Great Recession. In fact, this may be harder.”

Each of the works in The Comix was made through the same process, in which Zeien co-opts images and paints on their surfaces before transferring the pictures onto a panel. It is “inspired by walls and kiosks seen in New York and overseas: Handbills are put up; the next person tears them down, but only partly; and the remainder gets plastered over into a fantastic surface of possibly hundreds of things. I’ve made many pictures that are pictures of the kiosks, and collaged them together, to make prints.

“I do this process again and again, layer and layer, and end up with a worked surface,” he says. “They’re layered-looking transfers, using adhesives and other things. Most are 10 to 20 layers deep. They take months, and I work on a few at a time because of paint-drying time.”

The pieces in the show all derive from comic books and strips, which Zeien says are the genesis of his interest in art.

“I learned to draw from comic books,” he says. “I have early memories of copying and re-copying a particular Superman drawing. Marvel Comics opened up a new avenue for me, with their hyperrealistic bodies and contorted viewpoints.”

His comic book collection is where he “learned about anatomy, spatial relationships, the whole idea of flattening. That was my art education until I went to college. I decided to show these pieces because I have not shown any of them in about 10 years.” 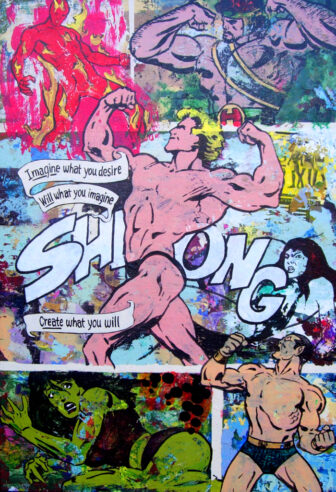 “Create What You Will”

Zeien attended Cornell, where he earned a bachelor of fine arts in printmaking. “That’s what segued into the printing business,” he explains. “And I was interested in printmaking because I was interested in the pulpy look of comics. I became a silk-screener and lithographer after 25 years in advertising as a graphic designer, running a company in New York City, where I lived until I moved to Cold Spring [in 1986]. I sold that business in 2008.” 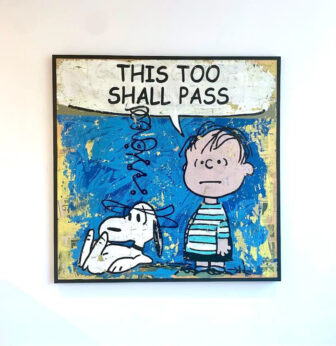 “This Too Shall Pass”

Zeien says he decided to move to the Highlands after noticing, while pushing his son in a stroller on East 86th Street in Manhattan, that “he was totally glazed over by sensory input.”

Cold Spring at the time “had a town center, which most towns didn’t. The railroad station was at ground level, with no platform, and it still had wooden ties. I’d get on the 6:50 a.m. train with five or six other people; now there are 10 times as many. By the time I stopped commuting in 2007, it was a whole other world. It went from bucolic to exurbia. Some people think it’s suburbia, but I’m not sure about that.”

The Buster Levi Gallery, at 121 Main St., in Cold Spring, is open from noon to 5 p.m. Saturday and Sunday, except Dec. 25 and 26. The Comix runs through Jan. 2. See busterlevigallery.com.