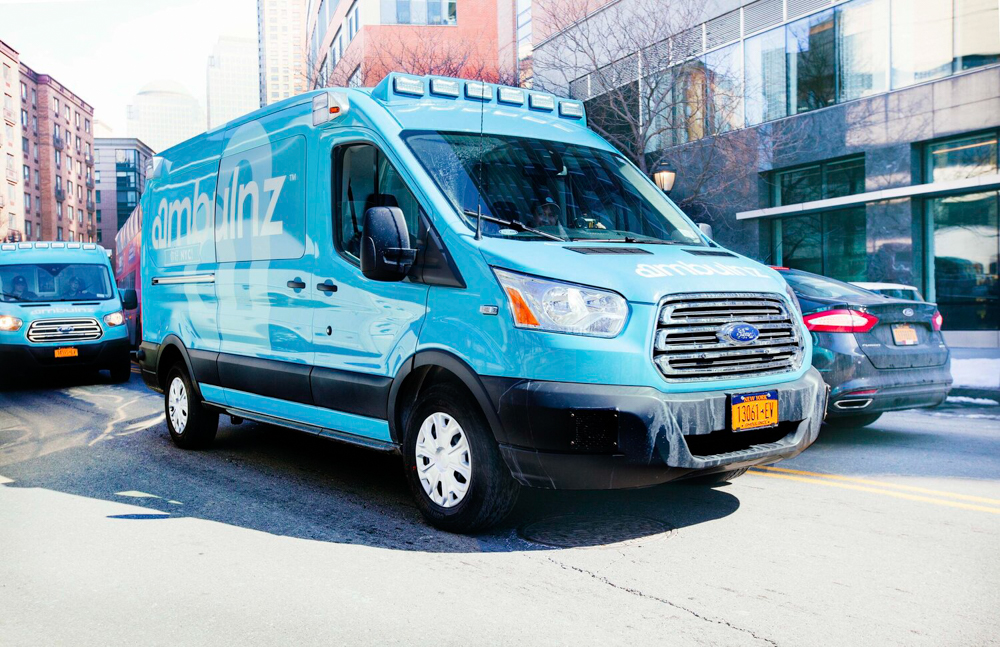 Ambulnz operates in 26 states and the U.K. (Photo provided)

Outcry over last-minute move from EMStar to Ambulnz

Plans by Putnam County to replace EMStar with Ambulnz as the provider of county-wide ambulance service as of Jan. 1 sparked an outcry at the county Legislature’s Protective Services Committee meeting on Dec. 15.

During a contentious session in Carmel, Putnam officials defended the move as economically prudent. According to Alessandro Mazzotta, the county purchasing director, for the first year of a five-year contract, Ambulnz bid $1,487,390 while EMStar bid $1,918,992. He said that no other services demonstrated interest.

Beacon likewise stated this month that it intends to hire Ambulnz for $150,000 in 2022 to provide advance life support (ALS), treatment by paramedics for heart attacks, strokes and similar medical emergencies. By comparison, other ambulance staff, typically emergency medical technicians, supply basic life support to stabilize patients until they can reach a hospital.

EMStar, based in Poughkeepsie, merged this year with Empress Ambulances, headquartered in Westchester County. Ambulnz, which has a New York City office, operates in 26 states and the U.K.

Chris Tobin, president of the Philipstown Volunteer Ambulance Corps (PVAC), told legislators that the $431,602 that Putnam would save in 2022 by contracting with Ambulnz “is not worth it. You just put a price tag on life, and it’s bad. If there’s any way that you can reconsider this contract, you should” do so.

Nicholas Falcone, PVAC captain, said that for front-line medical workers, “it’s not about the dollar sign” on a contract “it’s about the patient care,” but that with Putnam County “I think it came down to the dollar sign.”

He charged that some Ambulnz personnel appear to be the same individuals dismissed by other agencies for such causes as “negligence” and “crashing of ambulances” and that to be functional by Jan. 1, Ambulnz would need to bring in employees from distant states.

DocGo, the parent company of Ambulnz, said in a statement (below) on Wednesday (Dec. 22) that it performs extensive background checks and that the county also will approve personnel assigned to its contract. In addition, DocGo said it had hired only local staff and had no records of any negligence or motor-vehicle accidents.

Ambulnz and DocGo perform extensive background checks on each of our prospective employees, and the county also screens each of our employees and approves the personnel assigned to their contract. We found no record of any employee negligence or motor vehicle accidents for our Putnam staff. We have hired local staff to work for Putnam, and that staff will be working starting Jan 1. In addition, we plan on bringing staff from neighboring markets — our customers appreciate the fact that we have an extensive network of employees to draw from to help elevate their level of patient care.

Some of our staff has previously worked for other healthcare providers — it is standard industry practice to hire staff with such experience. All our employees are vetted with extensive background checks at the local, state and federal levels, and their references are checked as well. We look forward to working with Putnam County to provide these vital services in the new year.

Dr. Fran Brooks, a Cold Spring resident who oversees the emergency room at Vassar Brothers hospital in Poughkeepsie, also recommended that legislators be wary, alleging that some Ambulnz staffers had been let go by other health care providers and that she had been involved in some of their departures. “I don’t want these people taking care of me,” she said, cautioning legislators to look out for their constituents, as well as their own families, when picking ambulance services whose crews “are the ones who may determine whether you live or die. I’m pretty offended by the awarding of a contract without discussion” in a deal that “wasn’t done in public,” she said.

Legislator Nancy Montgomery wondered if the transferees would be able to maneuver on mountainous dirt roads or locate houses in isolated parts of Philipstown or parts of Putnam Valley, which she represents.

Objecting that even lawmakers “have never seen this contract,” Montgomery observed that they are still supposed to approve a $40,467 fund transfer to help pay for it.

Legislator Ginny Nacerino of Patterson, who chairs the Protective Services Committee, replied that “the county executive takes care of the contract” and picking an ambulance service “is not for us to decide.” Moreover, “it would have compromised the integrity of the contract” to let legislators see it, she asserted.

Mazzotta similarly said that until a vendor signs a contract, the agreement is under negotiation. He said that Ambulnz had signed the Putnam contract earlier that day.

Montgomery noted that the legislators routinely review other draft contracts. “I don’t agree that we should not be able to see” this one, she said. “This is checks and balances.” She also recalled that in early 2016, when the ALS provider failed financially and “it looked like Putnam County was going to be without ambulance service, EMStar came in and pretty much saved the day and bailed us out.” Getting rid of it may save money, she conceded, “but to what end?”

Tobin raised concerns about the effect on ALS services in towns. He explained that local ambulance corps pay the county-wide service — up until now EMStar — to supply ALS. The timing of Putnam’s deal with Ambulnz left PVAC and others no chance to bargain over Ambulnz’s charges, which could be quite high, he said. If so, he warned, it “will bankrupt the ambulance corps. How is that OK?”

Falcone suggested that “Ambulnz came in low [in bidding] because they’re going to put the costs on the towns, trying to recoup from the towns,” which pay local ambulance corps.

Larry Burke, who is the officer-in-charge of the Cold Spring Police Department but identified himself as a North Highlands fire department member, advised the committee that “you cannot in good conscience go with this contract. There’s just too many questions.”

Numerous other audience members, from towns and ambulance corps across Putnam, made similar points. After about two hours, Nacerino said that she hoped that Odell, who had not yet signed the contract, would listen to the recording of the meeting before proceeding. “Let’s make sure we walk into this contract with our eyes wide open,” she urged.

Although Mazzotta said that Ambulnz signed the contract on Dec. 15, DocGo issued a news release on Nov. 3 stating that Ambulnz would provide advanced life support paramedic services in Putnam starting Jan. 1, becoming the first to utilize a new 911 system created by a firm called Motion Acquisition Corp., which is merging with DocGo. The county posted the release on its website.

The news release quoted Odell as saying that “the health of our community is a top priority and we are thrilled to partner with Ambulnz” and “to be the first county to work” on Motion’s 911 system.

On Monday (Dec. 20), Montgomery sent Odell a memo asking for all versions of the Ambulnz contract and for any related correspondence.