He may only be 10 years old, but my son knows a historical anomaly when he sees one.

“It’s almost January and there should be snow,” he says, angrily pointing outside to the green grass covered in encroaching waves of warm fog. 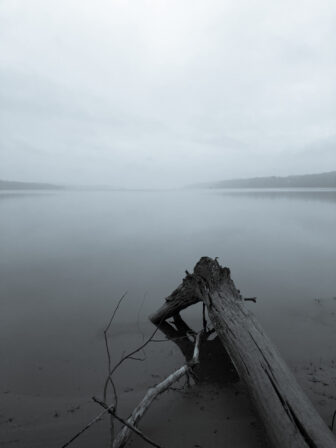 A foggy December on the Hudson (Photos by B. Cronin)

He’s right. The Mid-Hudson Valley usually gets between 5 and 6 1/2 inches in December. But aside from a dusting on Christmas Eve morning (aesthetically pleasing) and a few nighttime blasts of freezing rain (pleasing to no one), December has been another month of warmer-than-usual weather. As it demonstrated with our wet, hot American October, climate change has subverted our natural and cultural transitions.

The popular Christmas songs of the 20th century are starting to seem like myths, with their magical kingdoms of sleigh rides and marshmallow worlds — although Bing Crosby sounds eerily prescient, singing about the white Christmases he used to know. There’s a joke from a 25-year-old episode of The Simpsons in which Homer mentions loving a cold beer on a hot Christmas morning. It was 63 degrees in the Highlands on Christmas Day in 2020. The joke isn’t funny anymore.

A few weeks ago, right before the latest COVID-19 wave, friends from down south came to visit. I had hoped there would be snow for them. Instead, as we walked along the marshes of the Hudson, there was only fog obscuring most of the river, and a cold rain. It felt more like March, but with Christmas decorations.

I have no language for this, so I turn to the denizens of the other Highlands, the Scots, who know a thing or two about this type of weather. They had a word for cold, dull, misty days: dreich. There’s also the Celtic term mì-chàilear, which the writer Robert MacFarlane defines as “more dreich than dreich.”

We have now reached the holidays between Winter Solstice and New Year’s, the darkest time of the year. Traditionally, this is a time to fight the darkness with lights and festivities and gatherings around the hearth. But I’m not sure that’s appropriate in Dreich-cember. For one thing, it’s too warm to stand next to a roaring fire. Also, I would imagine that many of us are feeling less like the fire and more like the ashes. It can be exhausting to be expected to shine all the time. 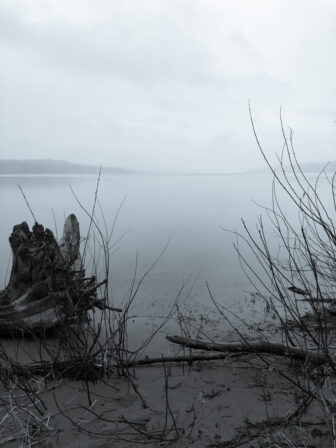 I would also imagine that many of you found your holidays turning into something completely different at the last minute. My original plans involved cooking a massive meal at home for family and loved ones, followed by a trip south to see my parents. One case of COVID later in a relative, the holidays instead consisted of my son and I holed up by ourselves for a week with a 6-pound pork shoulder and 22 hours of movies starring hobbits. I know of at least a few local people who spent Christmas quarantined in the basement after a positive COVID test, with their family upstairs — not a scene ever captured by Currier & Ives.

Instead of a season of lights and clarity, we may need to get comfortable with the dark and the mist, fewer jingle bells and more silent nights. Mist and fog usually have sinister connotations, but there are exceptions. The Irish have féth fíada, a magical mist that enshrouds the Tuatha Dé Danann, the ancient magical folk of the emerald isle, rendering them invisible to mortals.

Legends tell of this power passing to the mystical druids, and then to Saint Patrick, who used it to hide himself and his traveling companion from those who wished to harm them. When the high king’s troops came upon the two men in the woods, they saw only a deer and a fawn, peering back at them from behind a veil of mist.

This may be the greatest gift of our strange new season, the ability to vanish into darkness and fog, in order to protect ourselves.

One thought on “Out There: Season of Mists”