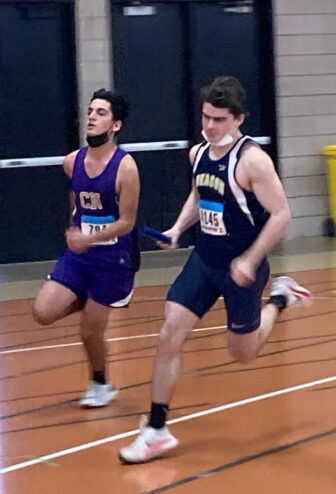 Eddie Manente (right) led off in Beacon’s win in the 4×200 relay at the Pearl River Invitational. (Photo provided)

For the girls, Chelsea Derboghossian won the 55-meters in 7.70; Kyla Richardson took second in the high jump at 4-6 in her first competition in the event; Isabela Migliore was third in the 800 in 2:37.89; and the 4×200 relay team of Derboghossian, Migliore, Richardson and freshman Christine Robinson won in 1:41.80.

“There is a fair amount of talent amongst the seniors, but it’s exciting at a meet like this one to get a glimpse of your future stars,” said Coach Jim Henry, who noted that about half the team was absent because of the holidays. “The kids who were available stepped up.”

Haldane also competed at the invitational. Senior Luke Parella finished sixth in the boys’ 1,000 meters in 3:00. For the girls, junior Andriea Vasconcelos was ninth in the triple jump in 24-7 and junior Helen Nichols placed 20th in the 1,000 meters in 4:18.38.

Beacon had its three-game winning streak snapped on Monday (Dec. 27) at a tournament hosted by Ketcham High School in Wappingers Falls, falling to the host, 61-31, in the first round. 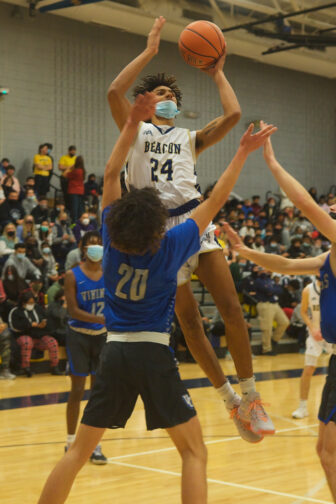 Jason Komisar led Beacon with 21 points on Tuesday (Dec. 28) in a win over Roosevelt High School. (Photos by S. Pearlman)

The Bulldogs came back Tuesday with a strong effort and defeated Franklin D. Roosevelt, 73-59.

“We were down one at halftime, and we weren’t playing bad,” Coach Scott Timpano said of the FDR game. “But offensively we lost some shooters [on defense] and they were hanging around. In the third quarter, a player from FDR attempted a two-handed dunk and it rimmed out. That gave us a fast-break, and Jason Komisar hit a big dunk for us — that was a huge energy moment for us. We took off, and that was it.”

In Monday’s loss to Ketcham, Beacon trailed 25-16 at halftime. “Our defense was pretty good — we held them to nine points in the second quarter, but we only scored six,” said Timpano.

Beacon (4-3) was scheduled to face John Jay of East Fishkill on Thursday (Dec. 30) in the final round of the nine-team Ketcham tournament. The team then travels to Cornwall on Wednesday (Jan. 5) and hosts Goshen on Jan. 7 at 6:30 p.m.

The Haldane boys (5-1) were scheduled to host Chester on Dec. 30 and will travel to Croton on Jan. 5.

Most Haldane junior varsity and varsity home games are livestreamed at LocalLive (bit.ly/haldane-stream). Many of Haldane’s opponents also broadcast via the site when they host the Blue Devils.

Many Beacon home games are livestreamed via HUDL through links at beaconk12.org/athletics. Many of Beacon’s opponents also broadcast via the NFHS Network (bit.ly/beacon-stream) when they host the Bulldogs.

A contingent of Beacon wrestlers competed at the Mid-Hudson Tournament held Monday (Dec. 27) and Tuesday at Arlington High School.

Senior Lou Del Bianco took second place at 215 pounds after losing in the finals to a wrestler from Xavier, Long Island. Del Bianco went 4-0 on Monday, then won three more times to reach the Tuesday finals, where he fell by a 4-3 decision. Del Bianco improved his season mark to 14-1.

“Lou has been wrestling well,” said Coach Ron Tompkins. “He pinned his way through most of his bouts and could have won the final if he’d just had a little more time. He was aggressive and good on his feet.”

At 285 pounds, Beacon’s two super heavyweights, Tyler Haydt and Sam Lundsford, each wrestled well on Monday, qualifying for Tuesday’s action. But both lost their two matches and were eliminated.

“They each had a good day on Monday,” Tompkins said. “On Tuesday they faced stiffer competition. But this is a good tournament, with good competition, and a good way to see where you are.”

The Bulldogs are scheduled to visit Cornwall on Jan. 7.

At Peekskill on Dec. 22, Haldane showed more of the consistent intensity their coach has been looking for but came up on the short, 47-39. 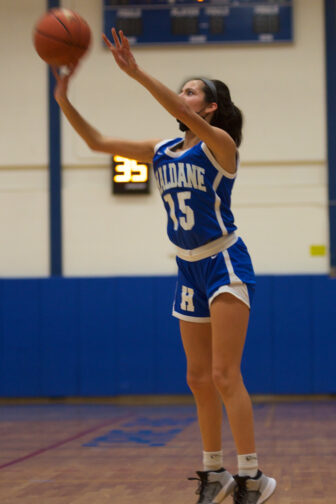 Maddie Chiera scored 10 points and grabbed four rebounds in a Haldane loss at Peekskill on Dec. 22.

“Peekskill has some standout players,” including freshman Bethany Overly, who finished with 19 points, said Haldane Coach Jessica Perrone. “She will be phenomenal, she’s tall, can handle the ball and can shoot and drive.”

Perrone said her team needs to tighten up its defense and avoid unforced turnovers. Nevertheless, she said, “I feel like this is the first game we’ve played hard all game, without a lull.”

Maddie Chiera led the Blue Devils with 10 points, while Amanda Johanson and Marisa Scanga each had nine and Mairead O’Hara scored seven and had four steals.

“Johanson and Scanga have been giving us 3-pointers, and that’s big because it drops the pressure on some of our other shooters,” Perrone said.

The Beacon girls (3-2) were scheduled to play at Highland on Dec. 30 and will host Cornwall on Jan. 4 at 4:30 p.m., travel to Goshen on Jan. 6, and host Spackenkill on Jan. 7 in the Terrence Wright Scholarship game.