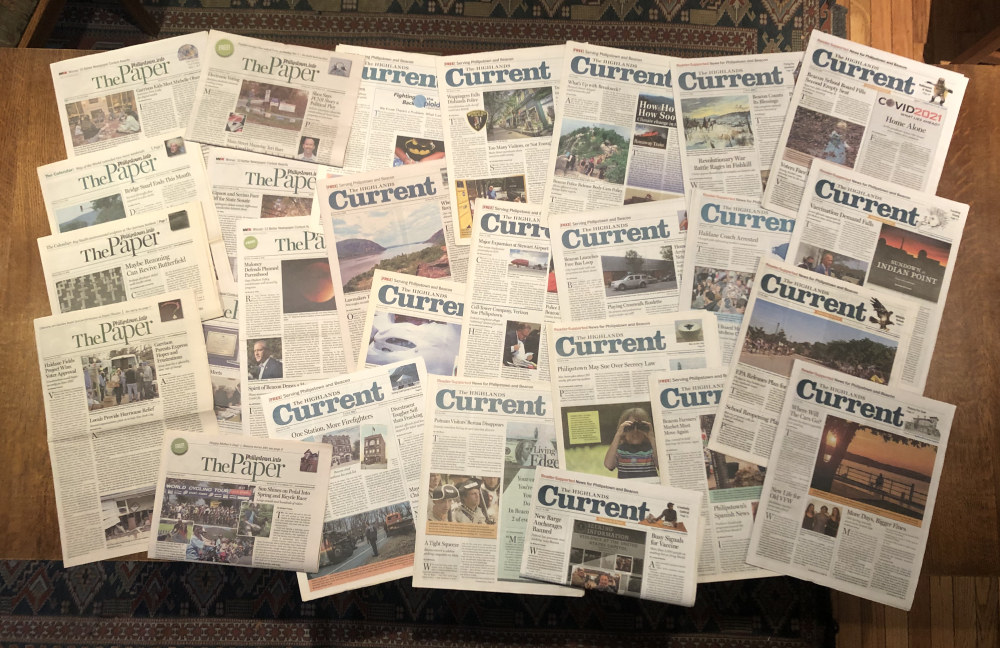 A few of our milestone issues from over the years, on the table where each of the first 500 has been copy-edited and proofread, including a prototype at center left.

You’re holding an issue of a fully baked idea.

It wasn’t completely half-baked when Gordon Stewart decided nearly 10 years ago to turn his online publication, Philipstown.info, into a printed one, but the idea of starting a print publication in 2012 was a little soft in the center. Newspapers were not being created; they were collapsing like once-bright stars, and at a rapid pace. (Since 2005, some 2,200 local newspapers in the U.S. — a quarter of the total — have disappeared.)

Like many of his Philipstown neighbors, Gordon, a corporate executive and theater producer, thought his adopted hometown needed a quality news source. This was in large part because Roger Ailes, then the chair of Fox News, had moved to town and upset the apple cart by purchasing its 142-year-old mainstay, the Putnam County News & Recorder. This origin story has since been recounted in The New Yorker, books, documentaries and TV dramas, but people reading The Current these many years later probably had no idea. It seems like a long time ago.

Philipstown.info was not even two years old when Gordon became convinced that digital needed to expand to print, a notion that many might view as a step back in time. What’s next — papyrus scrolls? But the staff launched The Paper, so named to be a sly dig by Gordon at the PCNR (which everyone called “the paper”) but which led to many Abbott and Costello-like routines: “Where did you see it?” “In the paper.” “In The Paper?” “That’s what I said. The paper.” (“First base!”)

The premiere issue appeared on June 1, 2012. Gordon decided that, like the website, it would be free, a service to the community, with advertising revenue finally offsetting the hundreds of thousands of dollars he was paying out of pocket to keep the enterprise going. Perhaps surprisingly, given the rigors of four-seasons Main Street retailing and an extended pandemic shutdown, only three advertisers from that first issue are no longer here — Art to Wear Too, Frozenberry Cafe and Go-Go Pops. The other advertisers in that issue included Hudson Hil’s, the Hudson Valley Shakespeare Festival, Angelina’s, Antipodean Books, the Manitou School, Foundry Cafe, Grey Printing and Houlihan Lawrence.

Gordon, of course, would be pleased to see this issue. He died in November 2014 at age 75, just before we published Issue 131. We changed the name to The Highlands Current in 2015 — as it happens, at Issue 200 — to better reflect our expanding coverage of Beacon.

You can browse Issues 1 to 499 at highlandscurrent.org/archives. A few issues are photographed above. Five names on the first print masthead are still there, on Page 4: Joe Dizney, Liz Schevtchuk Armstrong, Michael Turton, Alison Rooney and Michele Rubin (now Gedney). The print issues are collected in bound volumes at the office, as well, and despite rather embarrassing pleadings from the Smithsonian, we are not ready to part with them.

The question at hand, of course, besides what the headlines will be in Issue 1,000 on Aug. 1, 2031 (“Mask Up for Mu”), is “What has The Current done for me lately?” A fair inquiry. We are always striving to improve our coverage, our questions, the variety of stories and subjects and people you see in our pages. And next month, we are excited to say, we will venture into a new medium with The Highlands Current podcast, with the goal of two episodes per month.

The podcasts, created with assistance from Zach Rodgers, who hosts Beaconites, will include conversations with newsmakers, artists and other local people of interest. We’re working on theme music and I’m practicing my radio voice. The idea came in part from overhearing reporters interviewing people in the office for stories and thinking readers might be interested in hearing these conversations, too.

In the meantime, and going forward, you can listen to our stories online as streaming audio, read by a synthesized voice (he goes by Matthew) that isn’t half bad. He even puts inflections in the right spots. To that feed we will add podcast episodes. See the buttons in the right-hand navigation to subscribe.

What else? Well, as you may know, the paper is a nonprofit that relies on its members for support, and we are always looking for innovative ways for you to give us money. The latest is this: If you happen to be a Bitcoin millionaire and are not sure how to spend your digital earnings, search for “Highlands Current” at cryptoforcharity.io. Let’s be pioneers — together.

Your contributions fund not only coverage of civics, sports and the arts but “deep-dive” reports such as those we’ve published on the opioid overdose epidemic, climate change, the future of farming, people who are employed but living on the edge, microplastics pollution, the closing of Indian Point, local infrastructure priorities and, most recently, hunger in the Highlands.

In 2022 we hope to tackle the challenges churches face to get people in the pews; the overlooked history of Black people in Beacon and Philipstown; the overcrowding of our natural resources; and what would appear to be the uncertain future of high school football, given widespread concern about concussions.

Many local papers have died, many watchdogs have been sidelined — but not all. We have reached Issue 500, and we are grateful to everyone who helped make it happen.

One thought on “Editor’s Notebook: Looks Like We Made It”