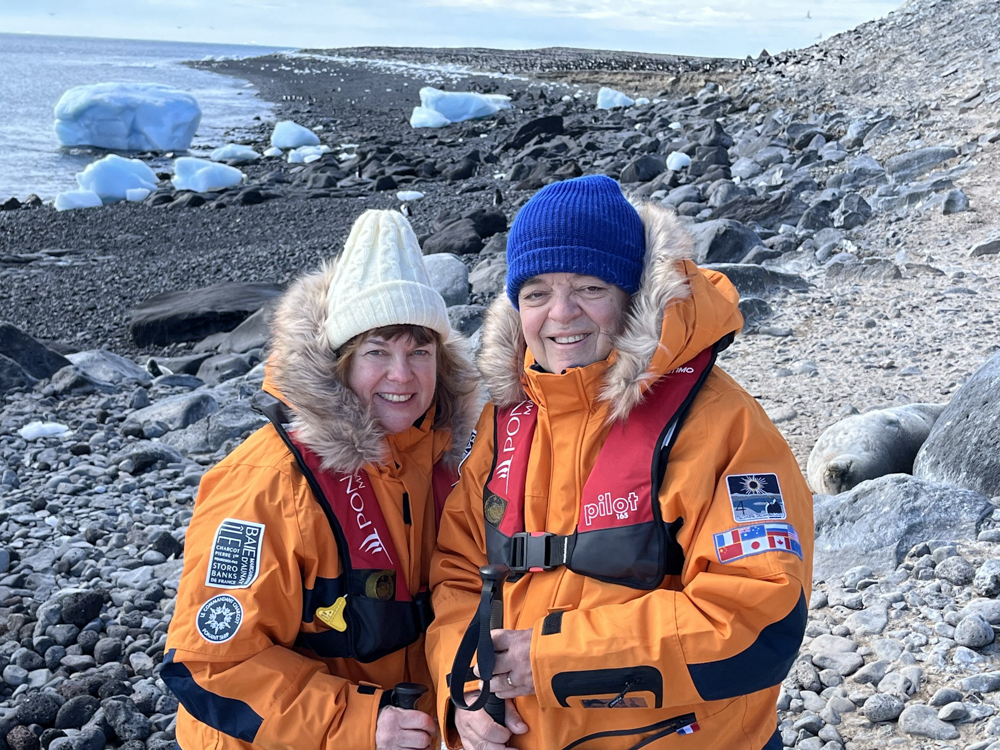 Ranate and Joe Rao of Putnam Valley visited Antarctica earlier this month in pursuit of a total eclipse of the sun. (Photos provided)

Antarctica may be the most remote and inhospitable environment on earth. But on Dec. 4, it was also the best place to view a total eclipse.

The eclipse coincided with a journey to the Antarctic offered by the French cruise line Compagnie du Ponant. When Putnam Valley resident Joe Rao was asked to be part of it, he quickly responded, “I’m in!”

Rao was the chief meteorologist and science reporter for News12 Westchester for 21 years. Since 1986 he also has served as an associate and guest lecturer at the American Museum of Natural History and its Rose Center for Earth and Space and Hayden Planetarium.

He was recruited for the Antarctic trip by the American Astronomical Society because of his knowledge of astronomy and eclipses and his ability to help the captain determine the best location for observing the rare solar event.

Le Commandant Charcot, Ponant’s 492-foot icebreaking cruise ship, left Punta Arenas, Chile, at the southern tip of South America, on Nov. 30. With 200 passengers, it sailed 1,800 miles east through the Southern Ocean, headed for a rendezvous with the darkened sun. 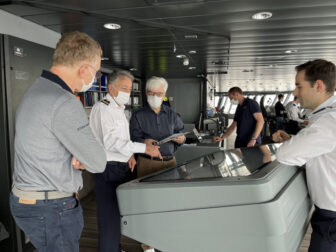 But even Rao’s impeccable meteorological credentials could not produce the clear skies everyone hoped for. Heavy cloud cover marred the view as the sun was eclipsed by the moon’s shadow.

“Many passengers were outside on the ship’s bow” to watch, Rao recalled. “But the only effect was that the overcast sky darkened, much like turning down a dimmer switch.”

The eclipse lasted just 97 seconds. Then the sky brightened again.

“It was interesting,” Rao said. “Not awe-inspiring, but interesting.”

Rao said of 17 cruise ships aligned along the path of the eclipse, “only one found itself under a fortuitous rift in the clouds and saw the eclipsed sun and solar corona.”

After seven days at sea, Le Commandant Charcot made Antarctic landfall at Paulet Island in the Weddell Sea. It was the first of four days that passengers would spend on the world’s southernmost continent. 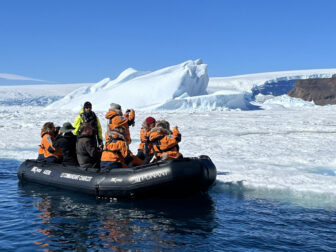 Inflatable boats provided a closer look at the environment.

“When we first set foot on Paulet Island, we saw thousands upon thousands of Adélie penguins,” Rao said.

At other times, the captain pointed out orca whales as they breached the surface of the ocean, spouting water through their blowholes. “We also were treated to views of sea lions and seals,” Rao said.

Antarctica was approaching its summer, and while April through October had produced record-cold temperatures averaging minus 77.6 degrees, by early December the weather had moderated by more than 100 degrees.

“The days were generally sunny and breezy,” Rao reported. “Temperatures at midday were 40 to 45 degrees, and one day reached the lower 50s.”

The end of fall also meant a lot of daylight.

“On many days the sun rose around 2:30 a.m. and didn’t set until well past 11 p.m.,” he said. “While we didn’t have a midnight sun effect, twilight was still very bright at midnight.” 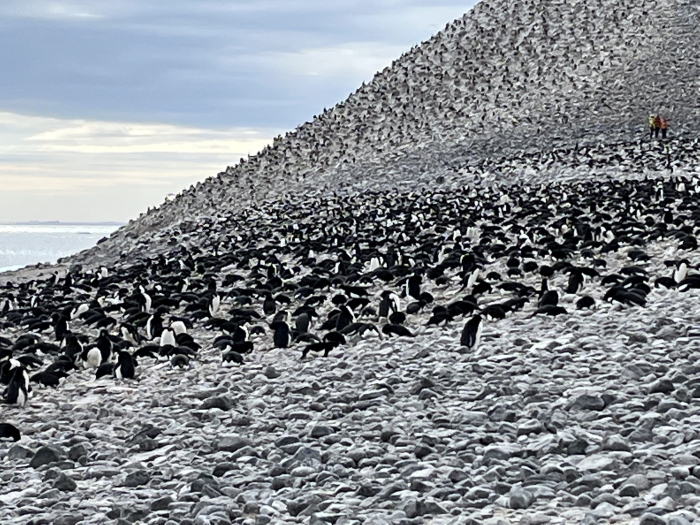 Because of the increased daylight, no stars were visible during the two-week voyage.

Rao said adjusting to the longer daylight hours was not difficult; double curtains kept state rooms dark for sleeping at night. A few times when he awoke, though, he said it was a shock to peak through the curtains to see the sun shining brightly at 3 a.m.

Climate change was a common topic of conversation. A naturalist onboard who has visited Antarctica for years commented that early December three decades ago saw far fewer openings in the ice, an increasingly noticeable change since the 1990s.

“My thoughts on climate change were reinforced,” Rao said. “I was prepared for frigid conditions, but most every day, temperatures were well above freezing.”

The trip didn’t include visiting any of the abandoned or active research stations located inland. However, the group did experience what is considered “hallowed ground.”

In 1903, the ship Antarctic was crushed by ice and sank off Paulet Island during a Swedish Antarctic expedition. Twenty crew members were rescued 11 months later after enduring the winter. They survived in part by killing more than 1,000 penguins. 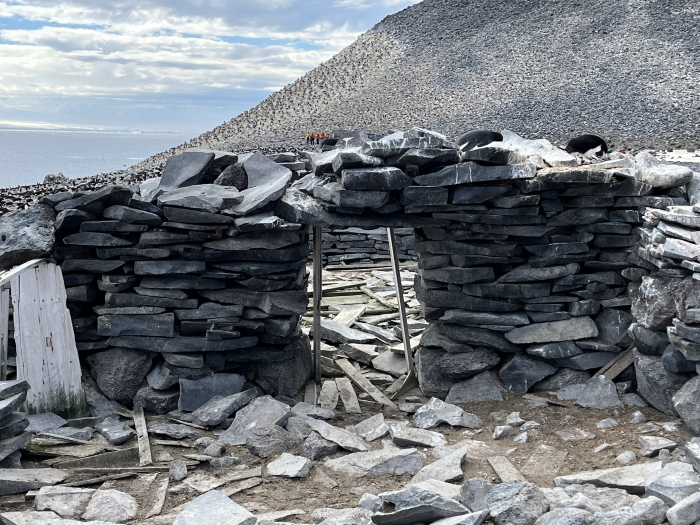 Le Commandant Charcot’s passengers visited the remnants of a stone hut built by the survivors, which, along with the grave of an expedition member and a cairn built to alert rescuers, was declared a historic site and monument in 1972.

“I came away with great admiration and respect for all those explorers who traveled to that strange, icy wasteland during the 19th and early 20th centuries,” Rao said. “I can’t even imagine what they must have done simply to stay alive.”

Asked what impressed him most about the 16,000-mile Antarctic journey he and his wife Renate had experienced, Rao said “being in such a strange and wonderous environment, and cavorting with creatures we don’t see in our everyday life.”

On Paulet Island, he said, “penguins walk up to you in much the same manner as pigeons in Central Park!”

■ Russian explorer Fabian von Bellingshausen “discovered” it in 1820.
■ Norway’s Carsten Borchgrevink built the first huts in 1899.
■ More than 40 countries have research stations, including the U.S. Amundsen-Scott station at the South Pole.
■ The permanent population of Antarctica is zero. Researchers vary in number from about 1,000 to 5,000, depending on the season.
■ Each year, the South Pole experiences six consecutive months in which the sun never rises and six months in which it never sets. 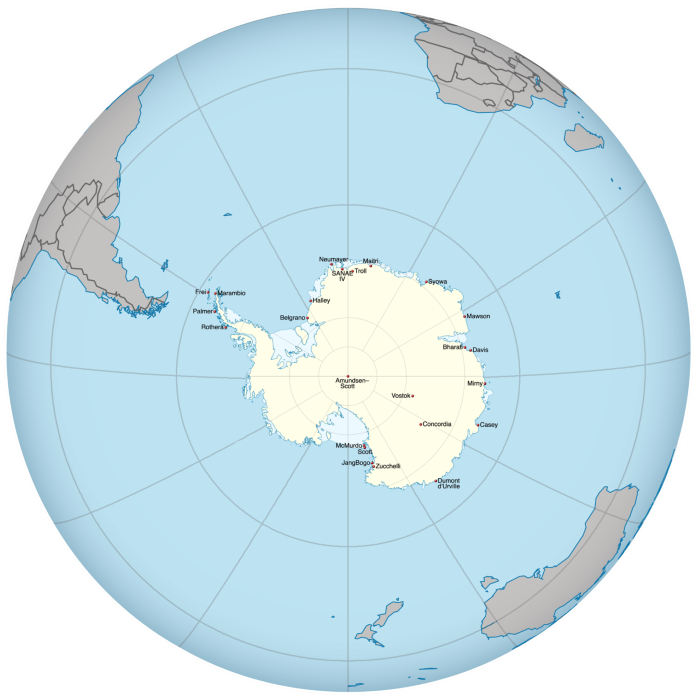 ■ In 1979, Argentinian Emilio Marcos Palma was the first person known to be born there.
■ It has 90 percent of the world’s ice.
■ A desert, it receives only about 2 inches of snow per year.
■ It has seven churches.
■ It has no official time zone.
■ The coldest temperature recorded was minus 144 degrees; the warmest was 63.5 degrees.
■ Mount Erebus, one of few consistently active volcanoes on earth, contains a 1,700-degree lava lake.
■ Pre-pandemic, nearly 40,000 tourists visited annually.
■ It has 5.4 million square miles, about 1.5 the size of the U.S.
■ In 1961, 53 countries signed the Antarctic Treaty, agreeing to use the continent only for peaceful purposes.
■ The Highlands are 9,095 miles north of the South Pole.