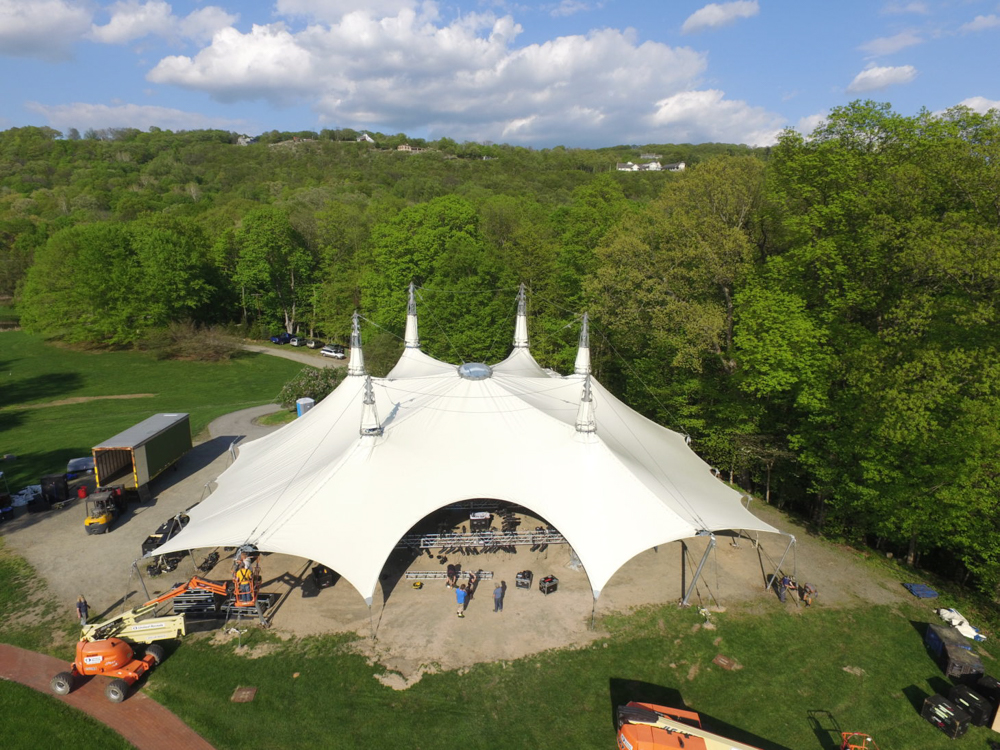 Philipstown Supervisor John Van Tassel says he will issue a permit for HVSF to erect its tent in 2022 on old tennis courts at the former Garrison golf course. (HVSF)

Over the last month, the Hudson Valley Shakespeare Festival’s goal of converting the former Garrison golf course into a permanent home advanced on two fronts, as the Philipstown Planning Board slated a public hearing for Jan. 27 and Supervisor John Van Tassel said he would allow HVSF to perform temporarily at its new location under its current tent.

The Planning Board has been considering HVSF’s concept of a theater and cultural campus on donated land at Route 9 and Snake Hill Road. Its plans include an indoor theater and housing for staff, as well as a tent, restaurant, inn and other facilities.

In proceedings separate from the Planning Board review, HVSF has asked the Town Board for a special-event permit so it can erect its existing tent, previously used at Boscobel, on former tennis courts at the new location.

On Jan. 6, at the Town Board’s formal monthly meeting in Town Hall, Van Tassel said that he had consulted his Town Board colleagues and now awaits confirmation from Garrison’s emergency services that they can handle calls at the new site. When it arrives, “I will be issuing a special-event permit to the Shakespeare Festival to operate at The Garrison” in 2022, he said.

Councilor Robert Flaherty added that HVSF wanted a two-year permit, but that Town Board members “all decided we would give them one year.” Flaherty, Van Tassel and Stephen Gaba, the town attorney, each observed that HVSF obtained one-year permits annually for more than three decades at Boscobel.

Gaba also explained that by law the town supervisor grants special-event permits, also known as parade permits. If an applicant qualifies, the supervisor “really has to issue the permit,” he said.

For HVSF to turn its long-range hopes into reality, the site must be rezoned, so the troupe submitted paperwork to that end. “But I don’t think it’s quite ready for action by the Town Board,” Gaba said. The property is in a planned development district, within the town’s rural conservation zone. Approved in 2005, the PDD featured the golf course, which has closed.

At the meeting, Garrison residents Joe Regele and Tim Nolan opposed giving HVSF a special-event permit, which, they contended, is for a parade, golf tournament, outdoor concert or similar affair, not a string of plays.

“The application is flawed,” Regele asserted.

“The whole, underlying premise” of the law “is to prevent long-term impactful events,” Nolan argued. “This is, to me, on the face of it, clearly a violation.” He termed an HVSF permit “a work-around” and conceded that, in this case, the ramifications might be minimal. Even so, “that isn’t the rule of law,” he said.

Van Tassel said that HVSF is addressing questions he posed about parking and that he asked Putnam County Sheriff Kevin McConville to station a deputy at the intersection of Route 9 and Snake Hill Road to assist with traffic when HVSF performs, until a traffic light can be installed.

The supervisor described HVSF as “a wonderful cultural” organization, which provides economic benefits as well, “and I wouldn’t want to lose it.”

At the December meeting of the Planning Board, HVSF outlined its plan to construct a bridge near Snake Hill Road and provided data on projected traffic and headcounts when its performances occur on the same days as weddings and restaurant and hotel bookings. The Planning Board and its consultants had expressed concerns about traffic if multiple events took place simultaneously.

“HVSF has committed to not having Saturday afternoon matinees at the indoor theater when there are also afternoon weddings,” John Canning of Kimley Horn, an HVSF consultant, wrote in a Dec. 13 memo. Consequently, the maximum number of people on-site in the middle of the afternoon — the busiest time for traffic on Route 9 — would drop from 1,100 to 920, and the maximum number of “vehicle trips” to 77.

“The Garrison has never [scheduled] and will never schedule more than one wedding on a single day,” Canning told the Planning Board.

The Planning Board scheduled the Jan. 27 public hearing for 7:30 p.m. at Town Hall, with a Zoom link for those who cannot attend in person.