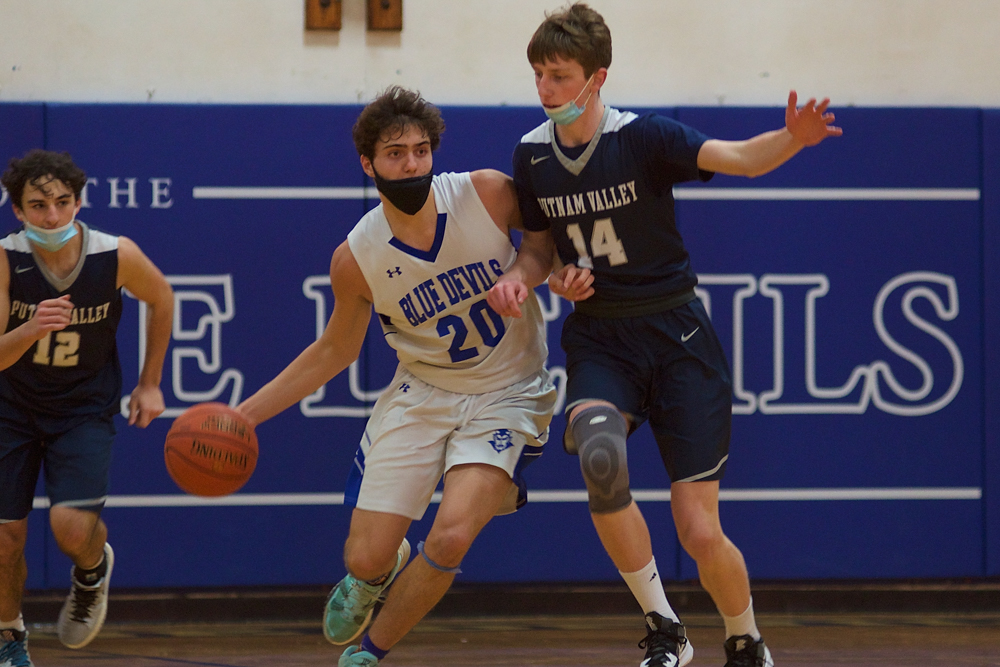 Matteo Cervone handles the ball for Haldane in a 73-52 win over Putnam Valley. (Photos by S. Pearlman)

After going 1-1 in their first two games of the 2021-22 season, the Blue Devils of Haldane High School dared to dream big: They decided their lofty goal would be to finish the season at 19-1.

Halfway through the season, the dream is alive.

Haldane (9-1) won its eighth straight game Wednesday (Jan. 12), dominating Palisade Prep, 70-52, on the road, including a 21-8 run in the fourth quarter. The Blue Devils also cruised in a 73-52 victory on Tuesday at home against Putnam Valley.

Haldane was tested on Jan. 8, hosting Chester, but ended the Hambletonians’ 17-game win streak with a 68-60 victory. Haldane opened last week with a 73-39 dismantling of Croton-Harmon on Jan. 6.

“Chester is a good team, and that was a great win,” said Coach Joe Virgadamo. “We were up four points at the half and went up by as many as 12 before they cut it to one. It was a good back-and-forth game.”

Matteo Cervone scored 26 points against Palisade Prep and Soren Holmbo had 19. Against Putnam Valley, Ryan Irwin had 19 and Holmbo added 14. Against Chester, Holmbo had 19, Cervone added 17 and Tristan Reid had 14.

“The guys have really been learning, and developing their roles, learning what’s best for the team,” Virgadamo said, adding that his players are “excited but humble and eager to get better every day. We have our eyes on the sectional championship.”

Against Croton, Cervone and Holmbo each had 14 points, Ben Bozsik had 13, Rob Viggiano had 10 and Ryan Eng-Wong had seven.

The Blue Devils are scheduled to host Pawling on Wednesday (Jan. 19) and Croton-Harmon on Friday.

The Beacon team also has had early success this season. During its game on Tuesday (Jan. 11) against Monticello, the Bulldogs held a commanding 28-4 lead at the end of one quarter on their way to a 59-39 win.

A team that won one of 12 games last season now has six victories.

“It feels great, but we could also be better than 6-4,” said Coach Scott Timpano. “We’ve had some tough losses.”

He said his 2020-21 team had focus but not experience. This year, “the maturity, the way they go into battle, that has changed. You have to love winning,” said Timpano. 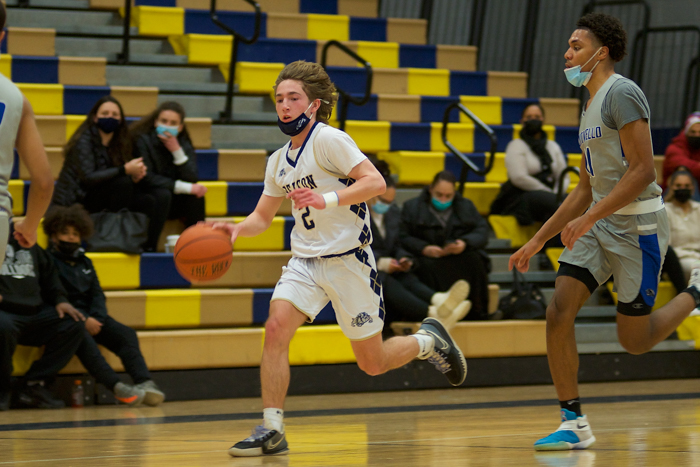 He said the Bulldogs came out fired up against Monticello following a one-point loss last week to Cornwall. “They wanted to take it out on someone,” he said. “Scoring 28 points in a quarter is fantastic, but also we only allowed four points on defense.”

Chase Green finished with nine points and eight steals, while Darien Gillins and Gavin LaDue each scored eight, Simmy Mann and Jack Philipbar each had seven and Adrian Beato handed out seven assists. The team finished with 25 steals.

Beacon is scheduled to travel to Port Jervis on Wednesday (Jan. 19).

“We started out slow, but the second half was better,” said Haldane Coach Jessica Perrone. “We couldn’t contain Eva at all.”

Against Croton-Harmon, McDaniel led the scoring with 15 points, Chiera had 12 and Ruby Poses, Siegel and Amanda Johanson each contributed six.

“When we lost to Croton by 11 in December, we felt like we played a bad first half,” Perrone said. “So we came out and made sure we didn’t do that again. Our spacing and ball movement was great.”

The Beacon team recorded a 47-17 victory at Monticello on Wednesday (Jan. 12) behind 22 points from Reilly Landisi and 14 from Devyn Kelly.

“We played a tremendous defensive game,” said Coach Christina Dahl. “Although we played a flat third quarter, we picked up the intensity.”

“Holding them to 36 points was fantastic,” said Dahl. “Offensively, as a team, it wasn’t our night.”

Beacon’s 4×800 relay team of Rubio Castagna, Sal Migliore, Jack Cleary and Evan LaBelle placed eighth in 8:36 at the Millrose Games Trials at the Armory in Manhattan on Wednesday (Jan. 12), and second among Section IX teams, behind Monroe-Woodbury. 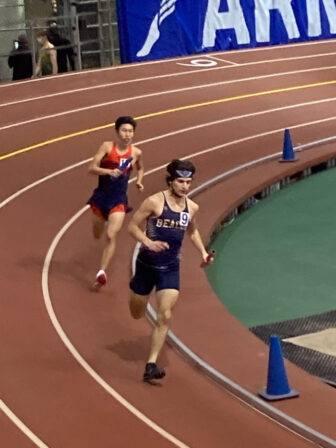 Sal Migliore (9) and his Beacon teammates finished eighth in the 4×800 relay at the Millrose Games Trials. (Photo provided)

Kyla Richardson also made the finals in the 55-meter run, posting a personal record of 7.9 seconds, the second-best time in the section. “I think she’ll continue to drop that time down and show up on the radar of Section IX sprinters from now on,” said Henry.

At the Ocean Breeze Freedom Games in Staten Island on Jan. 8, Rachel Thorne and Ella Cason finished fifth and sixth in the 3,000-meter run: Migliore was sixth in the 600 meters at 1:26, the best time for that event this season in Section IX; and Damani DeLoatch was fifth in the triple jump at 40-3.

Beacon dropped a 58-12 decision to Middletown on Tuesday (Jan. 11) at Wallkill High School in a Section IX tournament.

The Bulldogs recorded a win from heavyweight Lou Del Bianco, who pinned his opponent at 215 pounds to improved his season record to 16-1. Isaac Hansen also won by forfeit at 160 pounds.

Beacon was scheduled to host its own tournament on Saturday but the event has been canceled due to concerns about COVID-19. The Bulldogs are scheduled to wrestle at home on Wednesday.

Beacon (1-6-1) came back from the break against Red Hook on Monday (Jan. 10) but fell short, 98-66, on eight second-place finishes. The Bulldogs defeated Marlboro (which had only four swimmers), 97-30, on Wednesday and were scheduled to face Newburgh Free Academy on Thursday and travel to Woodbury-Monroe on Jan. 19.