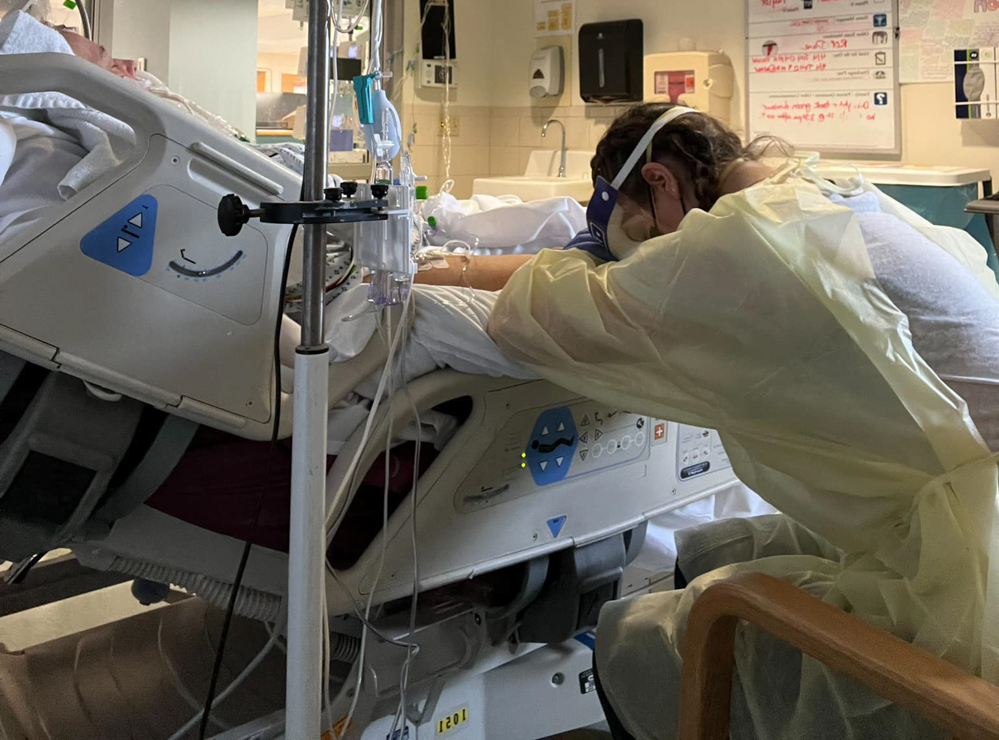 Maya Fasulo sits at her mother’s bedside earlier this month in the intensive care unit at Bridgeport Hospital in Connecticut. (Photo provided)

Someone from Bridgeport Hospital in Connecticut called to say that Cecile Fasulo’s condition had worsened.

Maya Fasulo dressed and drove the 20 minutes to the hospital. It was Jan. 7, one month after her mother, 56, had been hospitalized with COVID-19 and two weeks after doctors induced a coma to insert the tube that carried oxygen from a ventilator to Cecile Fasulo’s virus-ravaged lungs.

Maya had fought with the hospital to be there for this moment — to hold her mother’s hand and talk to her. Covered in a protective gown, she called relatives so they could also speak to the dying woman. A day earlier, during a two-hour bedside visit, her mother’s vital signs had improved, said Maya. This day, however, doctors issued a final forecast: The only thing keeping Cecile alive was her blood-pressure medications, including epinephrine and norepinephrine.

Maya, initially opposed, looked at the machines monitoring her mother’s vital signs. “It wasn’t fair for my mom, this prolonging of suffering and pain,” she said.

At just 20 years old, the Beacon native and former Haldane student said goodbye that day for the second time in 26 days. On Dec. 12, in the same hospital, her grandmother, Marie Anne Halleux, had died from COVID-19. Because her father, Beacon photographer John Fasulo, died in 2014, and her other close relatives live in Europe, Maya is on her own.

A family friend helped launch a GoFundMe account to raise money for expenses, including medical bills (bit.ly/fasulo-gofundme), and supporters have rallied with donations. But each day Maya confronts absence. The apartment she shared with her mother and grandmother in Connecticut feels “quiet and different,” and each day she sees her mother’s Audi convertible parked outside. Maya admits that she is terrified.

Life was OK before Thanksgiving.

Marie Anne, nicknamed “Miane,” had left Belgium for the U.S. to help care for Maya, then 2, when Maya’s father was diagnosed with Parkinson’s disease. With her mother commuting to New York City, where she worked as a human resource manager for the European Union delegation to the United Nations, Miane became Maya’s primary caregiver.

“My grandmother was the one driving me to swim practice, soccer practice and taekwondo,” she said. “We were always together; she taught me a lot of important life lessons.” 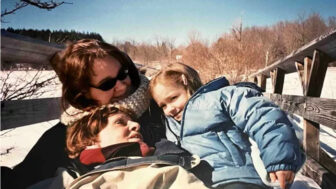 Maya Fasulo as a child with her mother and grandmother. (Photo provided)

Both Marie Anne and Cecile became sick the day after Thanksgiving. The initial symptoms — chills, coughing, fatigue — worsened. Marie Anne began having fainting spells, and both women found themselves short of breath. Cecile said the pain from headaches felt worse than labor, according to Maya, who did not want to say if either woman was vaccinated.

“My mom would be sitting on the bed with her head in her hands because that’s how debilitating the pain was,” she said. At the time Maya said she herself was still weak from a bout with COVID-19 two weeks earlier.

The virus took over Cecile and Marie Anne’s lungs. Maya, trained as an emergency medical technician, monitored her grandmother’s worsening blood pressure each day. On Dec. 4, she borrowed a pulse oximeter from a neighbor who worked as a nurse. Marie Anne’s oxygen level was 88 percent and her mother’s 78.

“Anything below 95 is critical,” said Maya.

An ambulance carried Marie Anne to Bridgeport Hospital that day and she was placed in an intensive care unit. Cecile was transported there the next day, and lay on a stretcher in the emergency room for more than two days before an ICU bed became available.

Three days after being admitted, Marie Anne was placed on a ventilator. On the day she died, Dec. 12, Maya had to say goodbye using Facetime because the hospital prohibited in-person contact. She also used Facetime to inform her mother of Marie Anne’s death.

Cecile’s screams “will probably never leave my mind at all,” said Maya. “It’s going to stick with me for the rest of my life, hearing that and trying to comfort her.”

During a Facetime call “to tell her that I loved her, that I was going to be OK,” Cecile cried, said Maya. “It was a rough moment. I sat in my car for three hours,” she said.

There were moments of hope over the next 20 days, but on Jan. 7, Maya gave Bridgeport Hospital consent to end the heart medications. Healthy lungs appear black on X-rays, and white spots indicate areas that are infected. Cecile’s were all-white, said Maya. Her heart and kidneys were also failing. With the medications shut off, Cecile did not last a minute, said Maya.

There is one relief: that her mother was not alone, as so many COVID-19 patients were when they died. “If I were in her shoes, I wouldn’t want to be alone,” said Maya.

There are now possessions to deal with and finances to untangle, and Maya has to decide whether to move back to the Highlands, closer to friends. Even if she returns to the area, there will be at least one return trip to Connecticut — for a memorial in Cecile and Marie Anne’s honor at Penfield Beach, on the shore of Long Island Sound in Fairfield. Both women liked to walk the beach together each night, said Maya.

The tone of the service, she said, will be a “celebration of life,” befitting a mother who liked to drive with her convertible’s top off, even in the winter. Attendees will be invited to stay to watch the sunset, said Maya.

“My mom loved sunsets. That was her thing,” she said.

2 thoughts on “Devastated By COVID”