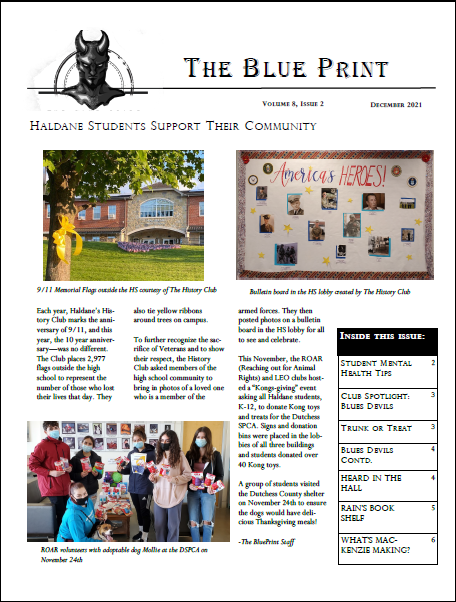 Five times each year, the members of Ashley Linda’s journalism class at Haldane High School publish a newspaper, The Blue Print. With support from the Haldane School Foundation, The Current is working with the students to share their reporting with the community. Selections from the October and December issues appear below.

I have been hiking since I could walk and I’ve loved Storm King and The Popolopen Torne for as long as I can remember. These hikes are two of my favorites because they’re placed almost perfectly in the valley where you get views of the river and the mountains surrounding. 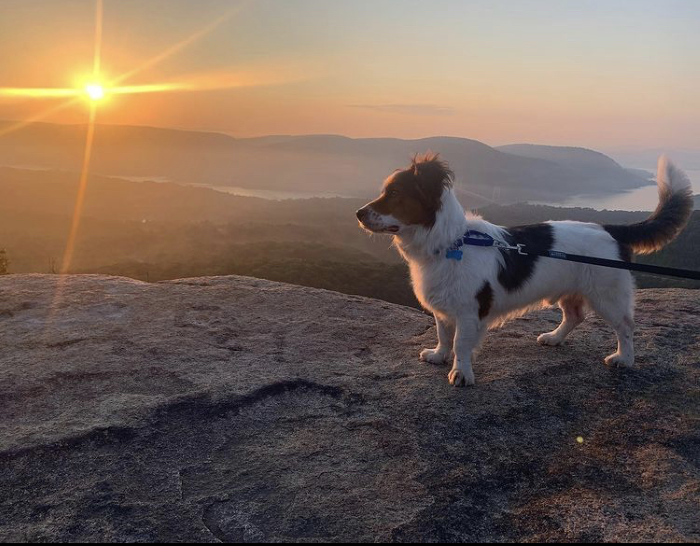 Hiking is my favorite all-season activity as each season there is a completely different scenery. We have wonderful mountains all around us with trails on just about every one. If you’re into scrambles and sweeping views these hikes are meant for you!

Trail safety is key. Research before you go, always carry directions and stay on the trail.


Storm King starts off with a steep scramble but as soon as you’ve finished climbing, you’ll be rewarded with immediate views of the valley. Since the hike starts almost halfway up the mountain, there are views around every turn. The real money spot is placed on the edge of the mountain with sweeping views of the river. It’s a perfect hike for fall and for anyone needing to get some fresh air.

The Popolopen Torne is a longer hike with some scrambles here and there, but rewarded with panoramic views of the river and the valley. The scrambles are steep and can be slippery, so bring shoes with good traction and be prepared for a climb! If you’re not into a longer hike, or if you’re in a time crunch, you can start from halfway up on 284 Mine Road on the blue trail. The Torne is one of my favorite hikes in the Hudson Valley as there’s so much to see and do! Make sure you have directions, and have fun!

The pandemic halted many extracurricular activities, but emerging from their mandatory hiatus Haldane High School’s band and club, The Blues Devils, have made a comeback.

The 18 students, ranging from ninth to 12th grade, find the club to be an enjoyable outlet: a place where they can hang out with friends, indulge in their love of music and cover songs by their favorite artists.

Many members of the club are multi-talented artists. Their diversity in skill is what the members say makes practicing as a group interesting as well as simply fun.

With a large number of participants and the imposing pandemic, formulating and organizing practices and rehearsals came as a challenge. “Practice is often a lot of sweat, hearing damage, unnecessary noodling from guitarists and a lot of laughing,” says guitarist and singer Lucas Valdimirof.

“Practices are very chaotic, but in a sensible way,” Alex Danilov, guitarist, added.

Putting aside the loud and joking nature of the practices, the internal support system within the group is very strong. “Everyone there is pretty chill about everything and very supportive about everyone playing and what-not,” states singer Sam Bates.

Through use of instruments, including drums, bass and guitar, the music genre the band primarily focuses on is classic rock. “However, we have played blues songs, pop songs and other genres that we have enjoyed diving into,” says Mr. Hoolan, the club adviser. “We always try to ‘metallicize’ songs we play by making certain parts heavier and giving them our unique spin.”

“Everybody in the club brings something unique to the band and I really rely on everyone to make it work,” Mr. Hoolan says. “For instance, Matt McCoy has been handling the sound balancing for us for the last two years. I can easily say that there’s no way this club would be functioning without his expertise.”

“Haldane is such a small school, everyone knows each other and it is very easy to keep up with the other bandmates outside of rehearsal,” Danilov says.

Mr. Hoolan says: “It’s a lot of fun and I learn so much each year. It’s really nice seeing students outside of the math classroom focusing on their hobbies and things they love. Being able to maintain continuity with the club last year and this year throughout the pandemic has been one of the highlights of my career.”

Due to COVID the band will not have the ability to perform in concert over the winter months. However, the band anticipates releasing a video with three songs: “Seven Nation Army,” by the White Stripes, “London Calling,” by The Clash and “One Way or Another,” by Blondie. “This is the first time we have made a video like this, and although it is not as exciting as performing live, it is a great alternative.” says Sam Bates.

Each year, Haldane’s History Club marks the anniversary of 9/11, and this year, the 10-year anniversary was no different. The club places 2,977 flags outside the high school to represent the number of those who lost their lives that day. They also tie yellow ribbons around trees on campus.

To further recognize the sacrifice of veterans and to show their respect, the History Club asked members of the high school community to bring in photos of a loved one who is a member of the armed forces. They then posted photos on a bulletin board in the lobby for all to see and celebrate. 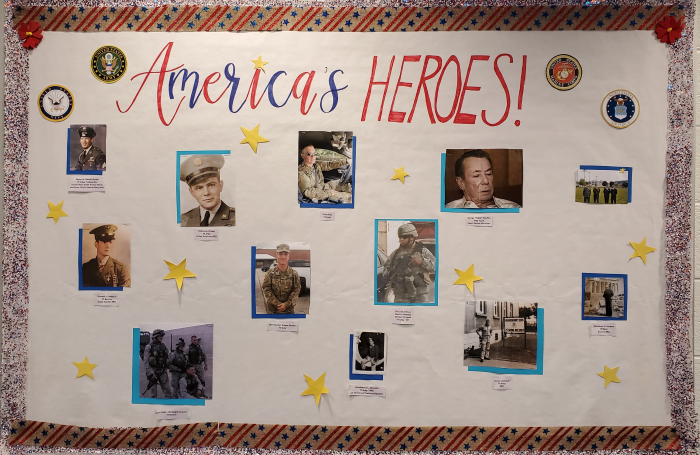 The History Club created this bulletin board honoring veterans.

This November, the ROAR (Reaching Out for Animal Rights) and LEO clubs hosted a “Kongs-giving” event asking all Haldane students, K-12, to donate Kong toys and treats for the Dutchess SPCA. Signs and donation bins were placed in the lobbies of all three buildings and students donated over 40 Kong toys. 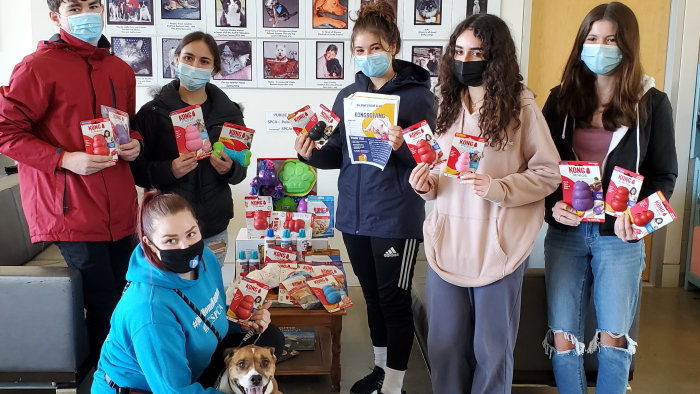 Members of ROAR (Reaching out for Animal Rights) collected Kong toys for dogs at the Dutchess SPCA.

A group of students visited the Dutchess County shelter in Hyde Park on Nov. 24 to ensure the dogs would have delicious Thanksgiving meals!

This article is the first of a series called The Spotlight in which I will be interviewing different artists throughout the school, to shine the light on them, their talents and all art has to offer. I hope this new series will inspire more artists out there to keep creating, writing and performing.

The Philipstown Depot Theatre has been a part of the Hudson Valley community for 25 years. The theater was started in 1996 by a group of local visionaries and has been providing theatrical and musical entertainment for the community ever since.

This past September, two Haldane High School students put their artistic talents toward commemorating the theater’s 25th anniversary in the form of a mural, featuring a silhouette of the theater surrounded by colorful designs. 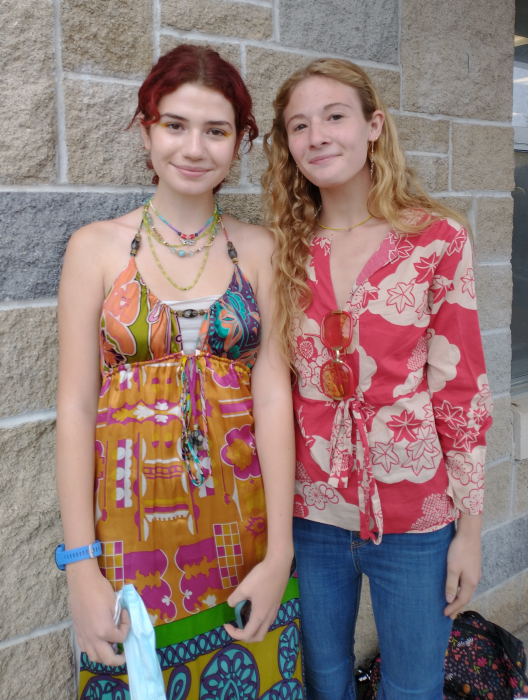 Olivia Flanagan and Celia Drury (both grade 11), the artists behind the mural, say that they were given a logo to stick to, but were given free rein of interpretation on bringing that logo to life. “We tried to represent the exciting artistic energy of the fine establishment of the Philipstown Depot Theatre,” said Olivia.

The Mystery of Edwin Drood had just been performed at the theater, and Celia says this was a source of inspiration for them, as well.

“[The actor] was doing these really expressive hand movements throughout the whole show, and I feel like that kind of expressiveness, through body as well as words, was really fitting into what theater is all about,” she said. She translated this expressiveness into their painting by an image of a hand featured at the right of the mural, right above their signatures.

For both artists, this is their first public mural. “A lot of my friends are involved there, and it’s a really wonderful community,” Olivia said. “It felt really good to be included and get involved.”

Olivia and Celia say they have been painting murals together in Olivia’s room for years, but this is the first time that their work has been exhibited for all the public to see. “It was fun to finally do one for the public,” Celia said. 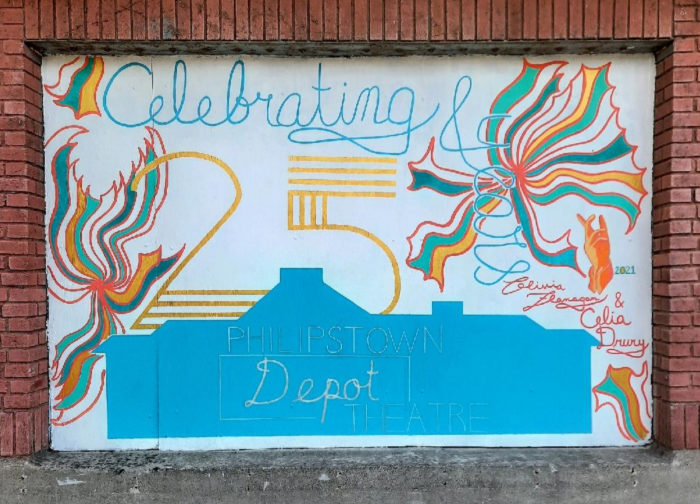 The mural at the Philipstown Depot Theatre (Photo by Kiera Shanahan)

Before we ran out of time, I had one final question for the pair. Did they have any advice for other artists out there?

“Don’t be afraid to take on big projects,” Olivia added. “Because I think they transform you as an artist as much as they transform the community that they exist with.”

“And don’t be afraid to make art for yourself,” Celia concluded. “Do things that you think are cool, just for you. You don’t always have to have a greater purpose in making something. Making murals and doing things for the community and other projects is really fun, but it’s also really fulfilling and important that you do art for yourself.”

Art is something that is very important, something the world cannot function without. Too often it is overlooked or overshadowed by events like sports and trends.