Seth Dinitz had no idea a trip to walk his dog at Dockside Park in Cold Spring would draw him into an international missing-person case that remains unsolved.

On Jan. 3, the Garrison resident spotted a red backpack resting on rocks at the edge of the Hudson River.

“It was clean on the exterior,” he recalled this week. “Inside, everything was waterlogged.”

Its contents included two days’ worth of neatly folded clothing, a wallet, cellphone, work documents, a mechanical engineering diploma, family photos and a photocopied passport. It also contained $599 in cash and 8,500 kyats, the currency of Myanmar, worth less than $5. 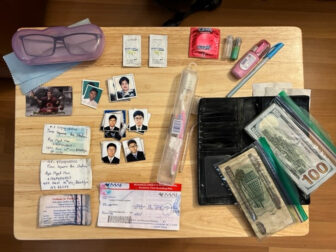 Some of the backpack’s contents (Photo provided)

The documents belonged to Aung Phone San, 26, a Myanmar national and a cadet engineer aboard the M.V. Medi Hakata, a bulk carrier registered in Panama.

Dinitz was advised by the Cold Spring Police Department to alert the New York State Police, which in turn notified the U.S. Coast Guard.

The Medi Hakata had arrived at Coeymans Marine Terminal, about 10 miles south of Albany, on Dec. 9, before heading back to New York City four days later.

After Dinitz had taken the backpack home and dried its contents, he discovered contact information for friends of Aung Phone San in Brooklyn. They told him the young engineer had been missing for more than two weeks and referred him to Haing Moe Than, a Colorado resident and close friend of Aung Phone San’s parents, who has been acting as their representative in the U.S. since their son went missing. 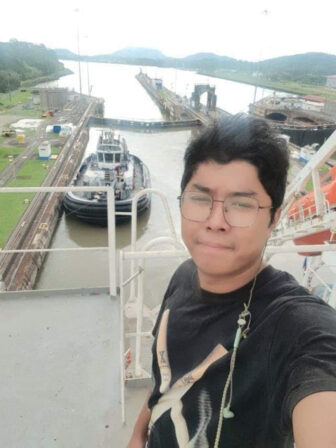 A selfie that Aung Phone San sent to his family; it was probably taken in Panama.

Haing Moe Than said Aung Phone San had called his mother in Myanmar on Dec. 12, telling her he would not be returning home and that he planned to jump ship during the Medi Hakata’s return trip along the Hudson to New York City. It sailed the day after the call.

Haing Moe Than said Aung Phone San feared for his life because he had been involved in anti-military activities in Myanmar. Some of Aung Phone San’s friends had been arrested, tortured or killed for similar activities, he said.

Myanmar, which shares borders with India, China and Thailand, and was formerly known as Burma, has been ruled by a military junta since February 2021. The regime has been widely criticized, including in a United Nations report that said the military has used live ammunition against protesters.

According to the Medi Hakata captain’s log, Aung Phone San was last seen in his cabin by two crewmates at 7 p.m. on Dec. 13. He was reported missing the next morning.

From New York, the ship continued to Baltimore, where, on Dec. 15, the Coast Guard confirmed that Aung Phone San was no longer on board.

Brian Linn, a friend of the family, traveled to Cold Spring from Los Angeles on Jan. 12, hoping to learn more about Aung Phone San’s disappearance.

Linn met with Dinitz, visited the site where the backpack was found, posted missing-person flyers in communities up and down the Hudson and spoke with local police departments.

He also contacted the caretaker on Constitution Island and officials at the U.S. Military Academy at West Point. There had been speculation that Aung Phone San may have jumped ship in that area because it is one of the narrowest sections of the river.

But his efforts proved fruitless. 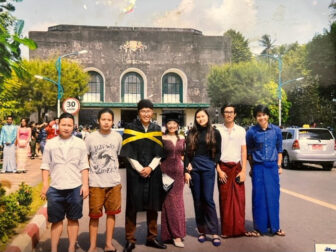 Aung Phone San at his graduation from engineering school; the photo was found in his backpack

Linn said in an interview that Aung Phone San had contacted Burmese people living in the U.S., asking for advice about jumping ship during the Hudson River passage.

“Most advised him against jumping into the cold river,” Linn said. “He has never lived where there is a cold winter.”

The average winter water temperature in the Hudson River at Albany is 37.4 degrees. A person can survive in 41-degree water for 10 to 20 minutes. 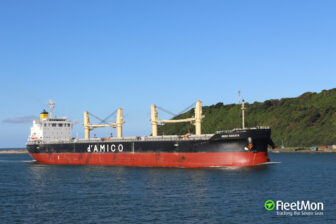 Dinitz returned the backpack and its contents to Aung Phone San’s family and assisted Linn in his search efforts. “I’m hoping there’s a happy outcome, but it’s a long shot,” he said.  “There was a call from a young woman in Ossining who thought she recognized [Aung Phone San] on the street after seeing the poster.”

A Coast Guard spokesman said on Wednesday (Jan. 19) that it conducted a water search for Aung Phone San when the missing-person report was filed but the operation was suspended “after determining there was no longer a reasonable expectation of survival given the weather and temperature conditions.”