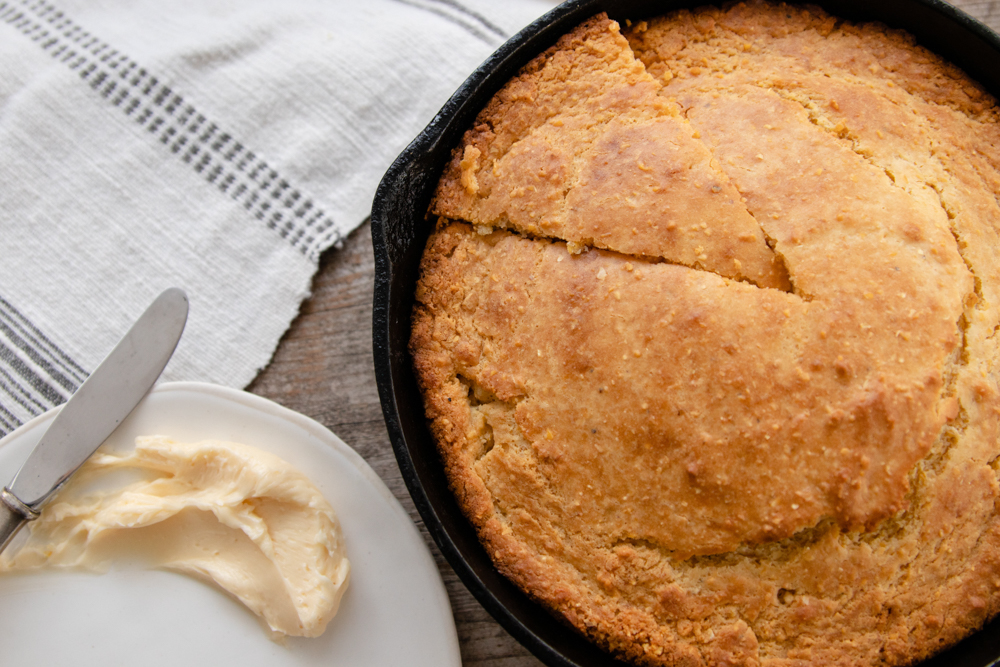 And that, my friends, is a crying shame.

For one thing, great cornbread has a sublime texture: little pips of custardy cornmeal held in light, crumbly suspension. Its flavor, too, is a quiet miracle, thanks to corn’s natural sweetness and flinty-sunshine aroma.

Cornbread and its kin are arguably the most American foods that exist, long predating even the decision to slap the name “America” on this stretch of land. Indigenous peoples from Narraganset Bay to the Anasazi Pueblos were making variations on corn patties, breads and cakes thousands of years before European occupiers showed up. Their culinary ingenuity was taken up by the settlers, and it persists to this day in regional dishes such as hoecakes (cornmeal pancakes), hush puppies (fried cornmeal), corn pone (fried cornmeal pancakes) and dodgers (boiled cornmeal dumplings).

In fact, the only thing non-native about cornmeal is its name — corn comes from the same Germanic root as the words kernel and grain. (Corned beef, interestingly, derives its name not from corn but from the grains or kernels of salt used to cure it.)

By comparison, there’s nothing very American about our quintessential patriotic dish, apple pie. Both apples and pie crusts came here via Europe, the former having originated in Asia, the latter in medieval kitchens. Even at its height, apple pie was a regional dish rather than a national one. As for the phrase “American as apple pie,” it didn’t come into popular use until World War II.

Of course, recipes evolve and cornbread is no exception. Most versions (including mine) feature butter in place of the original animal grease, along with white flour, sugar and dairy. Yet even as its flavor and texture have likely improved, cornbread’s stature has diminished. Early visitors to these shores raved about things like ash cakes (cornbread wrapped in leaves and cooked on embers) as if they were tasting truffles.

I suppose it suits cornbread’s self-effacing nature that it sidled into this week’s column meek as a kitty-cat. Here’s what happened: I made a pot of chili. Because we had a lovely houseguest, I decided at the last minute to bake a batch of cornbread to upgrade the meal. The recipe I followed was a total plus-one — an afterthought to soft-shell crabs. Moreover, I didn’t have all the ingredients called for, so I adapted.

The resulting cornbread was nothing short of extraordinary. Even so, it took me half a day to realize it was worth sharing.

The last time I’d tasted life-changing cornbread I was in my 20s, sitting down to dinner at a now-shuttered Manhattan restaurant called America. The restaurant’s menu featured foods from all 50 states. In its early, trendy days, it was the first place many New Yorkers encountered curiosities like fajitas and poke. Yet the only eye-opener I recall tasting during my handful of visits was its blissful cornbread.

I’ve made acres of cornbread in the years since, especially at summer camp, where it provided a useful calorie-bump to many meals. Campers were always happy enough when we served cornbread, unless we served it with honey butter, in which case they went berserk. Honey butter is nothing but honey blended with butter, but whenever we offered it alongside the much more labor-intensive cornbread, they looked upon us as if we were Prometheus returned from Mount Olympus with ambrosia stolen from the gods.

I offered honey butter to my family-plus-one last weekend, but no one went for it. They were busy quietly celebrating the best cornbread to appear in this little corner of America for a very long time.

Delicious straight from the oven, this cornbread is even better, in my opinion, if you let it sit for a day or two, so that the cornmeal grits absorb moisture and soften.

2. If you are comfortable browning butter, brown 8 tablespoons (1 stick) in the cast-iron pan over medium heat. If not, follow directions in the note below.

3. In a large bowl, whisk together the cornmeal, flour, baking powder, baking soda, sugar and salt. In a medium bowl, combine the eggs, sour cream, milk and honey and whisk until smooth. Whisk in the slightly cooled browned butter. Make a well in the center of the dry ingredients and pour in the sour cream mixture. Whisk briefly, using large, sweeping strokes, until just combined; do not overmix.

4. Heat the cast-iron pan over medium. Add 2 tablespoons butter, and when it’s melted pour in the batter. Bake 25 to 30 minutes, or until golden brown and firm, rotating the pan halfway through.

Note: Browning butter entails caramelizing its milk solids. It’s not at all hard, but requires close attention. Using a small or medium-size stainless-steel skillet can help you keep an eye on the transition and keeps the butter from spreading too thin. Fill a pan bigger than your skillet with cold water and set aside. Cut 1 stick butter into pieces and melt it in the skillet over medium, then cook, stirring frequently for about 5 to 6 minutes. At first, the milk solids will rise to the surface and create a cloudy, curd-like froth. After about 4 to 5 minutes, they will drop to the bottom of the skillet. Soon thereafter, a clear, beer-like foam will begin to form on the surface. Watch attentively now as the foam thickens, stirring constantly until the solids in the bottom of the pan are a rich, medium-brown. Dip the underside of the skillet into the pan of cool water and set aside until ready to use.

Using an electric mixer, blend the butter and honey in a small bowl until thoroughly combined.