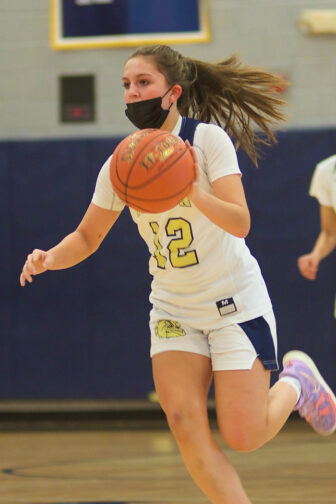 Reilly Landisi scored 25 points on Tuesday, and 27 on Jan. 14 in a pair of wins for Beacon (Photos by S. Pearlman)

Landisi, one of five freshmen on the roster (along with five sophomores), also dished out seven assists as the Bulldogs improved to 6-4. Every player on the squad scored, including sophomore Shadaya Fryar with 10 and freshman Rayana Taylor with eight.

“We started off slow defensively, and didn’t rebound well,” said Coach Christina Dahl. “In the second half we had better effort and intensity on defense and controlled the pace of the game.”

Dahl said she likes the progress she’s seen in her young team.

“Reilly has grown tremendously,” Dahl said. “We’re lucky to have her three more years. She’s tenacious and determined — two qualities that will continue to allow her to excel.

“Daveya [Rodriguez] has also been a presence on offense,” the coach said. “Rory LaDue and Devyn Riley help control the tempo on defense and Shadaya gave us great rebounding. We also got great minutes off the bench from Rayana, Shy’anne Kush [seven points] and Kiarra Rodriguez [four points].” 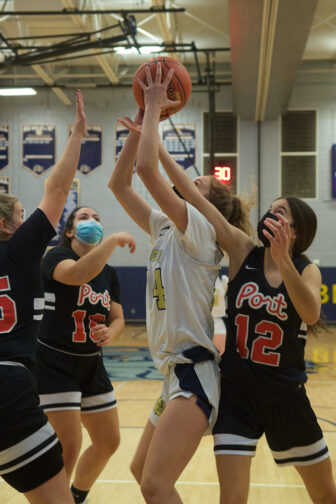 On Jan. 14, Beacon won at Newburgh Free Academy, 48-44, behind a 27-point, 10-assist performance from Landisi. Rodriguez added 11 points and 12 rebounds, and Fryar had seven points and 11 rebounds.

“That was a huge road win,” Dahl said. “Winning on the road is never easy, especially at Newburgh. They’re an athletic team and well-coached.”

Beacon is scheduled to host Marlboro on Monday (Jan. 24) and travel to Haldane on Wednesday for a 4:30 p.m. game that will be livestreamed.

“Maddie hit some big three-pointers when we were down, which set off a 12-0 run to give us a lead in the first half,” said Coach Jessica Perrone. “The girls stepped up on the press, which helped keep us in the game when shots weren’t falling early. Maddie led on offense, but it was a well-balanced game, with multiple players picking up a few points.”

Haldane (5-6) is scheduled to travel to Croton-Harmon today (Jan. 21) and Valhalla on Monday before hosting Beacon on Wednesday and traveling to Pleasantville on Thursday.

This year’s Haldane team is one of the more balanced and talented units that Coach Joe Virgadamo has fielded.

“We came out and did what we wanted to do,” Virgadamo said. “We had 10 three-pointers, which is a huge positive. We shot well. We played disciplined, got second shots and we got better. Hopefully, that helps us in some tough upcoming games.“

“Eng-Wong has climbed the ladder this year,“ Virgadamo said of the junior. “To have 17 off the bench is a great night. Ben also played well at both ends and Irwin has been phenomenal for us — scoring and defense. Tristen has been great with the assists, steals and deflections, and Stefano played some of his best minutes.”

Haldane was scheduled to host Croton-Harmon today (Jan. 21) and Franklin D. Roosevelt on Monday before traveling to Beacon for the Battle of the Tunnel on Wednesday. Beacon won the inaugural game in 2020 in a 63-62 thriller at Haldane; last year, the teams played twice, with Haldane winning both and claiming the trophy. Check beaconk12.org/athletics for a livestream of the game, which begins at 6 p.m.

When Beacon hosted Port Jervis in December, the Bulldogs walked off with a two-point league win. The team wanted to send a different message on Wednesday at Port Jervis, and that message was defense.

“Our defensive pressure was good,” said Coach Scott Timpano. “We created havoc. They’re a slow-it-down team, so we wanted to make them play faster. We forced a lot of turnovers that we scored from.”

“Chase and Adrian kept everything going for us,” the coach said. “They created a lot of pressure. Gavin LaDue also did a good job giving us a rebounding presence.”

Beacon is scheduled to host Minisink Valley on Tuesday (Jan. 25) for senior night and Haldane on Wednesday. “It’s too bad we can’t have a lot of fans [because of pandemic restrictions], because the first game [at Haldane] was an incredible night of high school basketball,” Timpano said. “Last year we had no fans, and unfortunately this year there will be very limited fans again.”

(On Thursday, Athletic Director John Giametta said restrictions on the number of spectators at home games will be lifted as of Monday [Jan. 24], but masks will be required.)

“We knew we could post a fast time in the 4×400 relay, but the chance hadn’t presented itself,” said Coach Jim Henry. “Now that we have a top-three, Section IX rank in both the 4×400 and 4×800, we have options heading into the championships next month.”

The Beacon boys defeated both Washingtonville and Highland last week by scores of 7-0 to improve to 6-4, while the girls defeated Washingtonville, 7-0, but fell to Highland, 5-2. Their record is now 5-6. Both teams will face Marlboro on Thursday (Jan. 27).

Beacon dropped a 58-12 decision to Middletown on Jan. 11 at Wallkill High School in a Section IX tournament.

The Bulldogs recorded a win from heavyweight Lou Del Bianco, who pinned his opponent at 215 pounds to improve his season record to 16-1. Isaac Hansen won by forfeit at 160 pounds.

Beacon fell to Cornwall on Jan. 13, 53-9, and was scheduled to host its own tournament on Jan. 15, but it was canceled due to concerns about COVID-19. Next up is a trip to Nyack on Tuesday (Jan. 25) and Red Hook at home on Thursday.