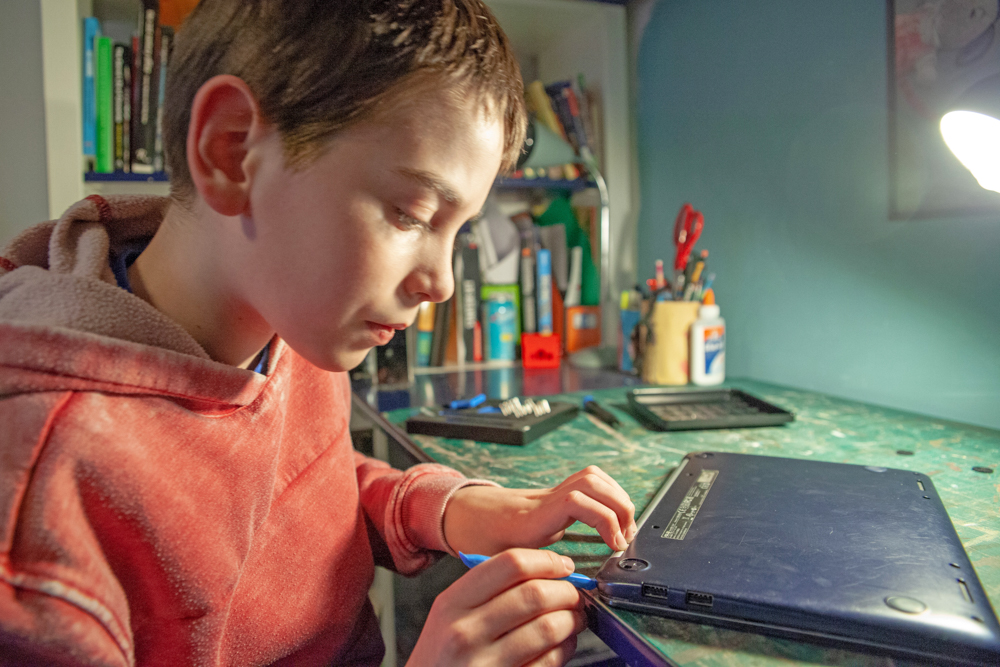 Eamon Wall earned the nickname “tech wizard” at the Manitou School in Philipstown because he helped classmates with computer problems.

Now, he is branching out.

Eamon, a sixth grader who loves computers and built his own in 2020, is the New York state representative for The IT Club, an organization run by middle and high school students who repair outdated and broken computers and donate them to needy children and families.

He discovered The IT Club after he started following its founder, Ethan Zuo, on social media. Zuo, a high school senior in California, created the organization in an effort to decrease electronic waste, or e-waste, and help students who don’t have computers. There are five other branches, for northern California, southern California, Arizona, Minnesota and New Jersey.

Donations of electronic devices in any condition are accepted, even if they have missing keys or cracked screens. Eamon erases the data, installs a new operating system and disinfects each device.

So far, residents have donated two laptops, and he is looking for more, convinced there is a lot of local e-waste.

E-waste is a growing problem as the number of computers, cell phones, televisions and technology continues to grow. According to the United Nations University, 53.6 million metric tons of e-waste were produced worldwide in 2019, a 21 percent increase from 2014. The organization predicts e-waste will grow to 74 metric tons by 2030.

At the same time, according to The IT Club, 35 percent of households in the U.S. with school-age children and annual incomes of less than $30,000 do not have access to adequate technology for learning at home.

“We found a problem and another problem, and we found a solution that solves both problems,” said Eamon.

One of Eamon’s duties as head of the New York branch is to organize a speaker series, so he asked Aaron Freimark, a Cold Spring resident who works in the tech industry, to speak to IT Club kids about entrepreneurship.

In addition to collecting computers, Eamon is looking for volunteers to help refurbish them. To donate or volunteer, visit the-it-club.org.

An earlier version of this story said that Eamon had arranged for Aaron Freimark to speak to Manitou students. In fact, he spoke to members of The IT Club.