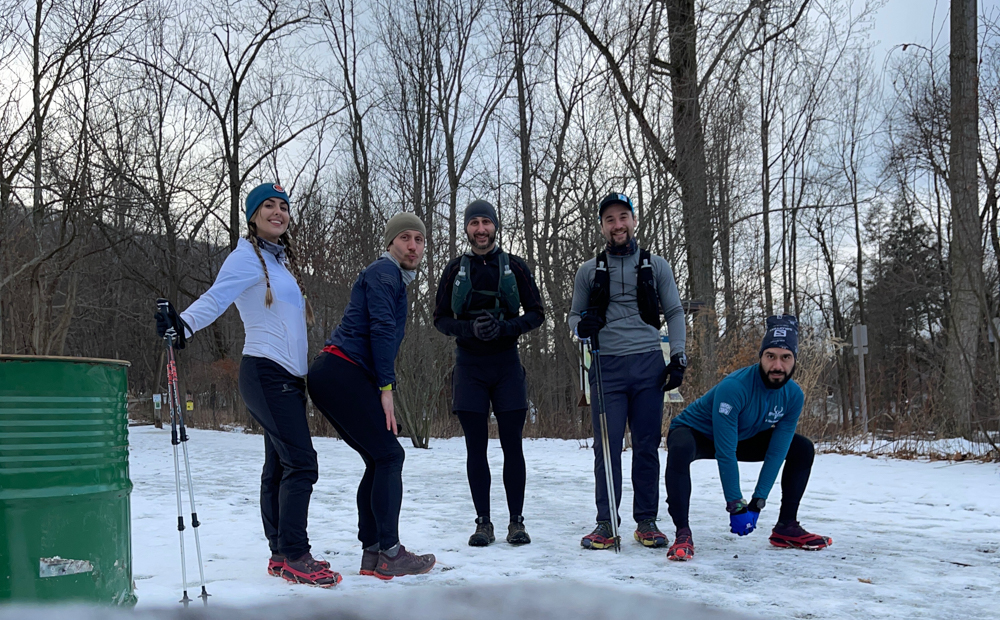 It’s nearly midnight in the Mount Beacon parking lot and everything is frozen.

The sun went down hours ago. The wind chill is pushing the temperature into negative double digits. One by one, five runners — Jay Lemos, Ryan Thorpe, Rae Baresel, Mike Diblasi and Steven Diblasi — make their way down the sheer glacier of the Casino Trail, the microspikes strapped to their running shoes scraping against the ice.

They’ve already gone up and down Mount Beacon multiple times, so the sensible thing to do on this night two weeks ago would be to start their cars and go home.

Instead, Lemos wolfs down a peanut-butter-and-jelly sandwich and chases it with a Mountain Dew. Thorpe stacks two pieces of pizza on top of each other so he can eat them both at once. Then, one by one, the five runners return to the dark, steep trail. They still have 10 hours of 24 to see how many times they can run, hike or crawl from the parking lot to the Casino Ruins on the north summit.

You might forgive them for thinking that they didn’t know what they’re doing, but Thorpe, Lemos and Mike Diblasi don’t have that excuse. They did it last year, too.

In late 2020, after a year of canceled road races, Lemos and Mike Diblasi began planning their own ultramarathon in Beacon, something low-key and unofficial. Lemos suggested a 100-mile race on the mountain, but the logistics of plotting a course seemed nightmarish. Then, after a few beers, everything came into focus.

How about a 24-hour race, up and down? It would be a minified version of “Everesting,” a term applied to any endurance event with at least 29,032 feet of vertical gain. The math was not hard: The distance from the parking lot garbage cans to the casino ruins and back was 2 miles, with 1,000 feet of vertical gain.

Thorpe, once he heard about the plan, was intrigued. “You get to climb the tallest mountain in the world but without all the other stuff that usually comes with it, like equipment and cerebral edema,” he said.

The three men had all run long, tough events but weren’t sure they could conquer Mount Beacon. “Going up and down that mountain puts such a crazy beating on you,” said Lemos.

But they persisted, and on Jan. 8, 2021, inaugurated The Great Beacon 24 Hour Everest 100 Endurance Challenge. It rained all night but each man completed at least 30 laps. Their sense of accomplishment was high. Their enthusiasm was low.

“We were wondering what would happen, and now we saw what happened, and it was stupid,” said Lemos, whose knees “checked out” with several hours left. “We said: ‘Never again.’ ”

That judgment didn’t last the year. In October, Rae Baresel, who is Lemos’ girlfriend, told him that she, too, wanted to run up and down Mount Beacon for 24 hours. “You don’t have to twist my arm to go through with a terrible idea,” he said. He contacted Thorne and Diblasi, who immediately agreed. “It was like they were just waiting for my text,” said Lemos.

That was how, joined by Mike Diblasi’s brother, Steven, who traveled from Alabama, the five athletes completed The Second Great Beacon 24 Hour Everest 100 Endurance Challenge. Thankfully, it did not rain. However, the route was covered in ice and the subzero temperatures made mundane tasks such as changing socks excruciating.

Surely, however, much was gained from the experience.

“I don’t know that I gained that much,” said Lemos, who managed to go about half a lap farther than in 2021. “Other than gratitude for having friends who are willing to be stupid with me.”

Will there be a Third Great Beacon 24 Hour Everest 100 Endurance Challenge? Thorpe said Lemos told him during their laps, in language as precise as it was unprintable, that they were never, ever doing it again.

“But you should never take an ultrarunner at their word during an event,” noted Thorpe.

Sure enough, last week Lemos said that since they’ve done the challenge two years straight, and always on the second weekend in January, they may as well make it an annual event.

Thorpe is already preparing. “I may plan a trip to South America for the month of January so I have an excuse not to do it,” he said.

3 thoughts on “Out There: Summiting Everest (in Beacon)”