Herman McKinney stood before Beacon City Court Judge Rebecca Mensch on Jan. 18, his attorney by his side.

It was McKinney’s fifth appearance before Mensch since Oct. 26, when the Beacon landlord first asked the judge to evict one of his tenants. But this appearance was the first since a state eviction moratorium had expired on Jan. 15.

McKinney said he rented a one-bedroom apartment, in a building he owns on South Avenue, for $900 a month. The lease began on June 1, 2020. The tenant paid the first month, he said, but nothing afterward, and owes him about $14,000.

McKinney’s attorney told the judge that the tenant had applied for the state’s federally funded Emergency Rental Assistance Program, been denied, and reapplied, although the program has distributed its allotted funding. While a tenant’s application is pending, eviction proceedings are put on hold.

The state stopped taking applications in November, but was forced to resume on Jan. 11 following a lawsuit by the Legal Aid Society.

“I can’t rent it; I can’t do anything,” McKinney said as we talked inside the courtroom after the judge adjourned the hearing. His tenant isn’t paying “because New York State says landlords can’t put you out as long as COVID is going on. This was her excuse.” 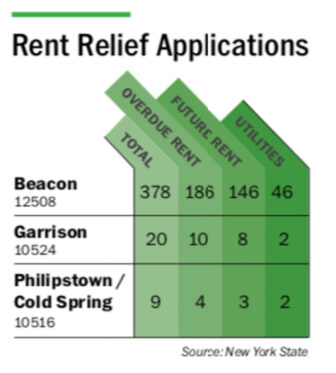 Data indicates that the Emergency Rental Assistance Program has helped not just renters who lost jobs and income because of the COVID-19 pandemic but their partners in suffering: landlords. Renters can apply for money to erase a year’s worth of overdue rent, cover three months of rent to prevent an eviction and pay overdue utility bills. Once approved, the money goes directly to landlords and utility companies.

As of Jan. 18, the state Office of Temporary and Disability Assistance, which administers the program, had received 296,511 applications and approved 108,242 payments totaling $2 billion, including $1.35 billion sent to landlords. Applicants from Dutchess County have received $7.2 million, including $5.3 million for rent arrears; in Putnam County, renters were approved for just over $1 million, including $777,000 for unpaid rent.

That was before the money ran out.

A notice overlaid on a bright pink background and with bold, capitalized headlines greets visitors to the Emergency Rental Assistance Program webpage. Visitors are told they can apply, but that no more money is expected from Washington.

However, the site notes that Dutchess is among five New York counties “projected” to still have funds. Under the rules governing the program, counties and municipalities with populations of 200,000 or more received their own federal funding, separate from what came through the state. But Colleen Pillus, a representative for Dutchess, said on Tuesday (Jan. 25) that the county may well also be out of funds.

Determining the unmet need is difficult. Gov. Kathy Hochul said on Thursday (Jan. 27) that New York has asked for $1.6 billion in additional ERAP funding from the U.S. Treasury. The money would cover 174,000 unfunded applications, said Hochul. The Treasury sent $27 million in response to an earlier request for nearly $1 billion, but that covered fewer than 2,000 applicants, she said.

New York’s moratorium just ended, so it may be too soon for a proliferation of eviction filings, if they ever come. It is hard to determine how many renters facing eviction meet the criteria of a pandemic-related hardship, or how many are scofflaws. Just as bad landlords exist, so do bad tenants.

Last month Princeton University’s Eviction Lab published an analysis of the impact of a U.S. Supreme Court ruling that a moratorium declared by the Centers for Disease Control and Prevention was unconstitutional. It found that filings grew in the first two months after the Aug. 26 decision but dropped in the third month. The filings were “still far fewer than are seen in a typical, pre-pandemic year,” it said.

McKinney’s case was one of 11 landlord-tenant cases on Judge Mensch’s docket for Jan. 18. On Tuesday (Jan. 25), there was one; on Feb. 1, she is scheduled to hear four, including McKinney’s.