The Beacon City Council appears to be moving ahead in unprecedented fashion toward a good-cause eviction law that some of its members say will protect renters — but it is doing so against the advice of city attorneys and other municipal officials.

The council has devoted more time to good-cause than any other topic in months. Advocates say the law, which has gained steam through passage in a number of municipalities after failing to advance as a state bill in 2020, would provide tenants with more protection than the Housing Security & Tenant Protection Act that then-Gov. Andrew Cuomo signed into law in 2019.

But City Attorney Nick Ward-Willis said in September that he believes the state law prevents municipalities from adopting additional local legislation. Ward-Willis said during the council’s Monday (Jan. 31) workshop that for that reason he could not defend the city if it adopts a good-cause law and faces litigation, such as in Albany, where a group of landlords has sued the city, calling its good-cause law unconstitutional.

Mayor Lee Kyriacou also cautioned that a Beacon law would be indefensible. “Someone is going to file a suit and say ‘Read your own attorney’s opinion. Read the opinion of NYCOM [the New York Conference of Mayors], whose job it is to advocate for municipal government.’ I think we’re done,” he said.

Advocates, however, including Justice McCray and Paloma Wake, who were elected to City Council seats in November, have urged the city to enact a good-cause law. They maintain that tenants are particularly vulnerable since the state’s moratorium on pandemic-related evictions expired Jan. 15.

The advocates point to the City University of New York’s School of Law and the nonprofit Legal Aid Society, which have both said that a local law would not interfere with the state’s legislation.

On Monday, Council Member Dan Aymar-Blair, who started the good-cause conversation last fall, stressed that developers or property owners may “threaten lawsuits to prevent cities from taking action,” but “I’m not going to back away from protecting renters just because we’re being threatened by the folks who perceive that they would be harmed by the law.”

On the flip side, a NYCOM lawyer wrote to Kyriacou last month, noting that “while not exactly analogous, good-cause eviction local laws appear to be extremely similar to eviction restrictions” that have previously been struck down in court. Kyriacou on Monday argued that NYCOM’s opinion should hold more weight than CUNY or the Legal Aid Society’s because it comes from a 100-year-old association of cities and villages, not an advocacy group.

City Administrator Chris White likened the organization to the Congressional Budget Office, saying: “They’re the ones that call balls and strikes.” 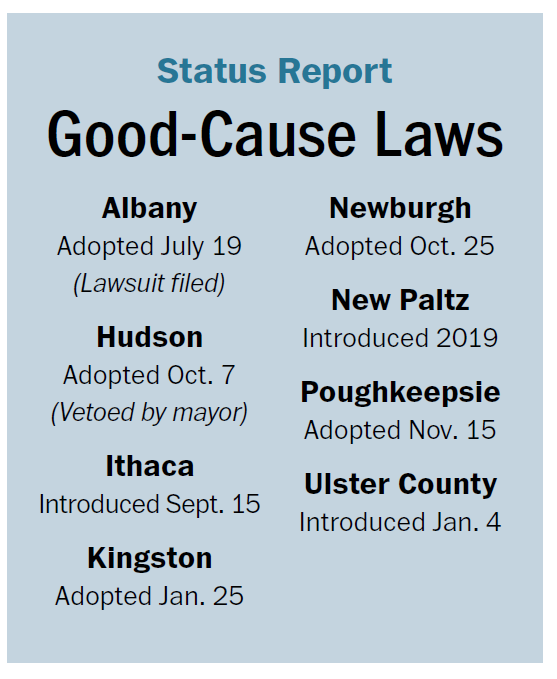 While Kyriacou opposes the good-cause law, he wrote last month to Gov. Kathy Hochul, asking her to consider state laws that would provide incentives and, through rezoning, encourage the building of more affordable housing. The mayor also asked for state programs to supplement federal Section 8 subsidies and provide rental assistance and eviction prevention.

In addition, the city set aside $25,000 in its 2022 budget for a program that will provide free legal assistance through Legal Services of the Hudson Valley to tenants facing eviction.

The council has asked state Attorney General Letitia James for a ruling on whether good-cause laws are permissible at the local level, but she has not responded. After announcing her candidacy for governor last year (she has since dropped out of the race), James said she supports a statewide bill, which has been introduced again in the New York Senate.

Despite the legal uncertainty, the council, with the exception of the mayor, appears ready to move forward with a public hearing on good-cause eviction and, possibly, a vote to enact the law.

The hearing is expected to be set for Feb. 22. The council could vote on a law that night, although previous councils were criticized for gathering public input and voting on the same night. If it chooses not to enact its own law, the council could approve a resolution urging the state to do so.

The 2019 state law did away with “vacancy increases” in rent, established a 2 percent cap for increases due to capital improvements and crafted a new formula for calculating increases in rent-controlled apartments (but not all others), among many other measures.

Where the good-cause laws go further is in delineating the conditions, such as failure to pay rent or breaking the law, required as justification for evictions. The laws also limit rent increases and protect tenants from retaliatory landlords. Opponents suggest the laws in essence create unbreakable lifetime leases.

Beacon’s draft caps rent increases at 5 percent, except in instances such as when a landlord makes capital improvements to a building or the market changes significantly. Only landlords owning fewer than four apartments who also live on-site would be exempted from the rules.

During more than 90 minutes of discussion Monday, attorney Drew Gamils, along with Ward-Willis, a member of the Keane & Beane firm that has represented the city since 2010, discussed a case in Ithaca in 2000 that saw the city adopt a law allowing landlords to evict tenants for illegal drug use.

The difference between that — which was viewed as an expansion on state law — and good-cause laws is “if you’re going to impose any sort of restrictions on landlords [such as naming the conditions required for eviction], that’s going to be viewed as a conflict” and would be struck down in court, she said.

Neither Kyriacou, who was first elected to the City Council in 1993, nor White, who served on the council in 1996 and 1997 before returning to Beacon at the beginning of 2021, said they knew of any other council that had adopted a law against the advice of its attorneys.

“It’ll come down to a vote as to whether or not we pass the law and we decide to act against the advice of counsel,” said Council Member George Mansfield on Monday.

2 thoughts on “Against the Advice of Counsel”