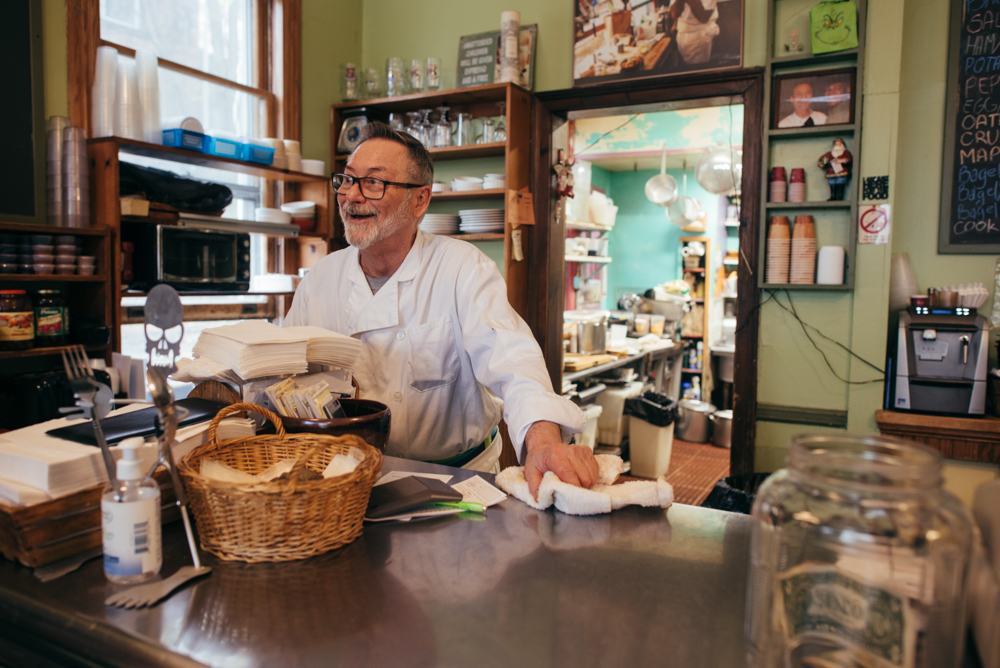 Jeff Consaga began working in 1990 at what became the Foundry Cafe and took it over in 1996. (Photo by Alexander Wilcox Cheek)

For Jeff Consaga, the owner and chef of the Foundry Cafe, time in the restaurant business can be measured by the egg count.

A couple of years ago, a cafe regular posed a question: “Consaga, how many eggs have you cracked in your career?”

“We broke it down with the help of a calculator,” Consaga recalls. He provided The Current this week with the final total — “I’d say at least 2½ million” — because the Foundry closed last month, ending a 26-year run on Main Street in Cold Spring.

The loss of the cafe is the most recent of a series of departures by longtime Cold Spring businesses, including the Downtown Gallery, which closed in 2020 after 34 years; C&E Paint Supply, which closed in December after nearly 70 years; and The Country Goose, which will close in March after 37 years.

Consaga began working as a cook at the cafe 32 years ago, when it was known as Karen’s Kitchen, and took over and renamed the business in 1996 in a nod to the West Point Foundry, which fueled Cold Spring’s early history.

With Consaga at the helm, the Foundry quickly became known for its made-from-scratch menu, including soups, quiche, salads, pies, cakes, Linzer tarts, muffins and two-handed sandwiches.

But it was French toast that put the Foundry on the culinary map after a customer asked to have the dish topped with fruit. Never known for his stingy portions, Consaga added strawberries, blueberries, bananas and apple. The customer returned the next day and ordered it again. And again, the next day, with his son — a double order.

The customer took a photo and introduced the internet to Foundry French toast.

“Initially it wasn’t bad,” Consaga said. “But then it took off.” People came from miles around. “I’m very proud of it,” he said. “But it’s also been the bane of my existence.” 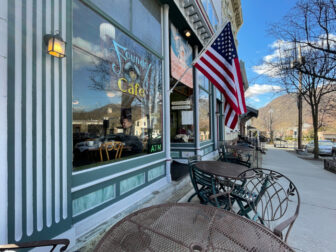 The Foundry Cafe debuted in Cold Spring in 1996. (Photo by Alexander Wilcox Cheek)

Consaga groans recalling the occasional customer who told him they would love to run a restaurant.  “What they don’t understand is that the restaurant runs you,” Consaga said, adding it’s different when you’re the owner, chef, bookkeeper and, at times, dishwasher.

The Foundry wasn’t just a workplace. For many it was about community — from the morning Scrabble games to potluck parties and live music.

About 20 years ago, Consaga decided it was too expensive to go to Manhattan for New Year’s Eve, so he brought the festivities to the cafe. The first celebration drew only a handful of people. That changed in Year Two with the creation of The Foundry All Stars, a group of musicians who became the de facto Dec. 31 house band.

Its members shifted through the evening. “Ten to 15 people would play at different times,” Consaga said. “Sometimes there were so many musicians, not everyone got to play.”

The potluck, BYOB, live band and a shoulder-to-shoulder crowd became a tradition. “Those parties were true community,” Consaga said. 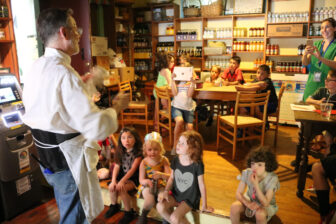 Haldane first graders quizzed Consaga (left) about his business in May 2019 for a class project. (File photo by Michael Turton)

In 2005, his affection for the community, and his beloved cafe, were captured on Hallmark TV’s The New Morning Show. It starred Consaga, supported by a cast of die-hard customers.

In 2017, The Current published “Cafe Confidential” in which Consaga recounted some of the cafe’s most bizarre moments and eccentric visitors. It remains one of the most-read stories on the newspaper’s site.

But it wasn’t her attire he remembers most. On a previous visit, she had offered to buy a beautiful, antique doorknob on a door at the back of the cafe but Consaga said he wasn’t interested in selling.

On her second visit she came prepared. “She replaced it with a cheap, glass knob,” Consaga said with a laugh, adding that he’s had nearly 200 music CDs stolen as well over the years.

But the bad memories are few and far between. For Consaga, the good ones are about the people, including celebrities he got to know and like, from Lou Reed and Bernie Williams to Diane Weiss, Pete Seeger, Rupert Holmes and Scarlett Johansson.

“There are some really, really good people in Cold Spring,” Consaga said. “So many of my customers are friends, great and interesting people from so many fields of knowledge.” He hesitated to name anyone but made two exceptions. “Sharon and Colleen,” he said. “Between them they’ve been with me for more than years.”

He also said he would take a few souvenirs. “I have important pictures of me with Guy Davis and Amanda Mosher, and a painting of the Foundry Cafe by Cheryl Johnson,” he said. “And a thick stack of posters from every band that’s ever played here.”

So why is he giving it up?

“At 67, with herniated discs in my back and the arthritis, I’m well past ready for retirement,” Consaga said. “It’s just kind of the right time.”

He said he has a few plans once the weather warms up, such as heading to the cliffs at Little Stony Point with his guitar and a beverage or two.

“And I’d like to go fishing,” he said. “In the past five years I’ve gone maybe twice. I didn’t catch anything, but it’s nice just to sit there.”