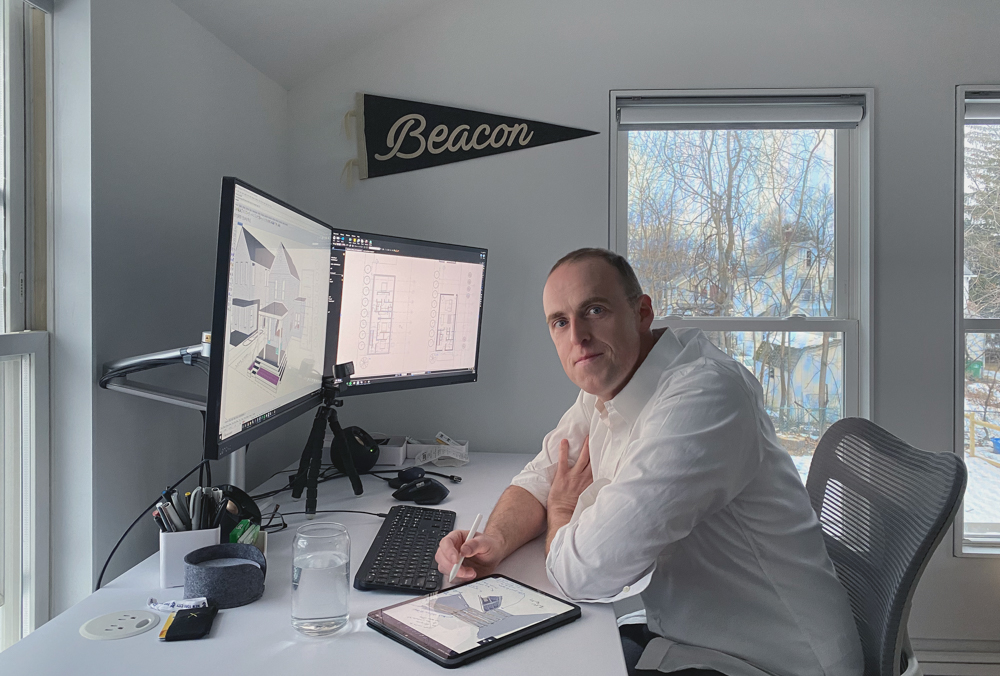 Prompted by the shutdown, James Petty started his own architecture firm. (Photo provided)

For some Highlands residents, the decision to change careers or start their own business is rooted in the need to make money after being downsized or losing a job due to the pandemic.

Others have chosen the risk of leaving safe, stable jobs after discovering the joys of working from home or feeling the time was right to pursue long-deferred dreams. Some found themselves in unexpected fields.

Despite the trepidation of the unknown, and the challenges of working for yourself, the people we interviewed said they felt excited and reinvigorated. As Sarah Uzelac said: “Twice in the last week I woke up before my alarm, and I just had ideas and excitement spinning around in my head, not stress.”

James Petty always planned to start his own architecture firm, but the pandemic accelerated his timeline.

Before then-Gov. Andrew Cuomo ordered businesses to close their offices in March 2020 to prevent the spread of COVID-19, Petty and his wife worked long days in New York City — his office was on 127th Street and hers on 52nd.

“By the time we would see each other, on an average day, it would probably be around 10 p.m.,” he said.

Six months before COVID-19 began sweeping the state, the couple decided to buy a weekend retreat and settled on Beacon. That became the place they set up home offices when their companies switched to remote work.

Suddenly, there were no commutes or separate offices. They bought office supplies, standing desks and a grill for the backyard.

He resisted giving that up when his company began pushing employees to come back full-time to the office. He tried working there intermittently but found it less productive.

Petty said he began seriously thinking of striking out on his own in January 2021, but decided to wait until the economy improved. He decided to go forward in July, starting his own architecture firm, Postscript Studio (postscriptstudio.com).

It was a frightening decision, he said, but as he began telling people he knew, it became “exciting really quickly” because some of them responded by telling him about projects for which they needed an architect.

“If this doesn’t work out, if I suddenly can’t make it and need an income stream again, or want to return, I can do that really, really easily right now,” he said.

A trained musician with a degree in jazz performance from the University of North Texas, Kat Selman daydreamed for years about owning a nutrition business.

She believes that would still be a daydream if not for the pandemic, which became the catalyst for Stone Flower Wellness (stoneflowerwellness.com), the Cold Spring business she recently launched.

Her services include one-on-one nutrition counseling that is a “deeper dive” than what a dietician or physician would offer, said Selman. Clients can expect an in-depth analysis of their diet and recommendations for improving energy and overall health, including managing weight and blood sugar. 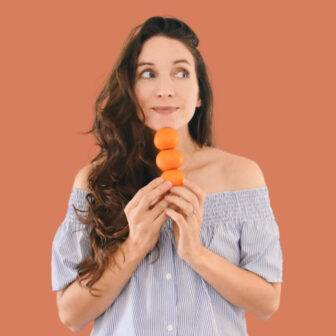 “I am definitely happier now,” said Selman. “I feel like what I’m doing is helping more people, and that feels really good to me.”

On the eve of the pandemic, both Kat and her husband, Stephen, were working at the Brooklyn Music Factory, a school for children and adults. Kat started out teaching voice and songwriting piano before moving into marketing.

Like other public and private schools, Brooklyn Music switched to virtual learning in March 2020, when the first COVID-19 cases appeared. Like many other people, Selman thought the disruption would be over within weeks.

“Then, everything just unraveled,” said Selman, whose job status was reclassified from full-time to contractor and her benefits cut. “I watched my hours get decreased and dry up.”

She decided to pursue her longtime interest in nutrition, enrolling in a one-year program that started in September 2020 and earning certification as a nutritional therapy practitioner.

After graduating, Selman introduced herself by posting on the Philipstown Locals group on Facebook. She expected a handful of responses, but received a “tidal wave.”

“That said to me there’s a need for holistic nutrition in our community,” she said.

Stephen Selman taught music during the week, and on weekends recorded New York City artists who trekked to East Mountain Studio (eastmountainstudiony.com), the production space located behind his home in Philipstown.

He also gave private instrument lessons to a few students, but “it wasn’t something I was trying to grow,” said Selman.

The pandemic shutdown stopped the flow of musicians, and the Brooklyn Music Factory, the school where he taught guitar and bass, switched to virtual learning. 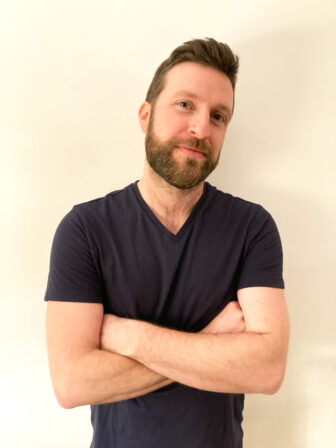 As the length of the shutdown grew, so did the uncertainty about when he would return to teaching in person. Then, the school canceled its summer camp, a big source of revenue, he said.

“Things started getting a little bit more dire week-by-week and month-by-month,” said Selman. “All of us who were salaried employees saw our salaries significantly cut.”

In June 2020, Selman decided to focus exclusively on private lessons for guitar, bass, piano, drums, ukulele or songwriting and production. A year and a half later, East Mountain Studio is “completely booked,” he said. Most of the students are children, but Selman also has adult students as old as 72.

Despite the challenges of running a business, especially when ongoing COVID-19 infection means often rescheduling lessons for students who have to quarantine, Selman said he doesn’t feel “half the stress or burnout” as he did when teaching at previous jobs.

“What I’ve found myself telling other people is, at the end of the day, having taught for a long time now, this is the most positive teaching experience I’ve ever had, despite all the difficulties and hard circumstances,” he said.

Sarah Uzelac could have brushed off the text from a friend in early November about an executive director opening at Topfield Equestrian Center in Philipstown.

The Beacon resident also could have abandoned her interest in the job after seeing that the application deadline had passed, and returned to teach at Mount Saint Mary College when the spring semester started in January.

Instead, the longtime psychology professor said she is brimming with new energy and excitement over her role. She takes over as the center, which provides horse therapy to people with developmental, mental and physical disabilities, prepares to resume its riding programs after a pandemic-long hiatus. 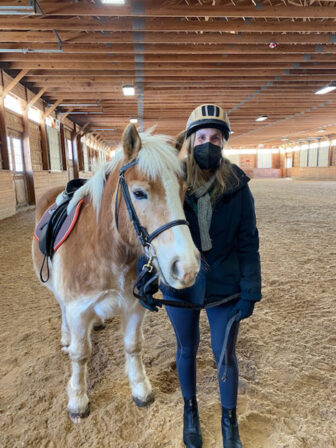 Even before the pandemic, college faculty had been “under a lot of stress,” particularly those working at small private colleges like Mount Saint Mary. Uzelac taught at the school for 15½ years, earning tenure, but the job “just became more stress than it was fun and fulfilling anymore,” she said.

The pandemic brought more challenges. Schools and faculty faced the challenge of teaching remotely and then the pressure to bring students back to the classroom amid concerns about safety.

“There’s a real pressure to get back in the classroom even though it may not be the best public health decision and that came to a head,” she said.

As a lifelong rider who had just retired her horse in September 2019, Uzelac emailed the Topfield recruiter for permission to send her resume despite the expired deadline. After a series of interviews, she was offered the position.

She gave notice to Mount Saint Mary on Dec. 15 after making, a week earlier, the decision to give up a tenured professorship. Any fear she had about leaving “evaporated” when the decision was made, she said.

“There’s so much for me to learn, and I feel so excited about learning it,” she said.

Nine days earlier, New York had reported its first COVID-19 case. At the time, O’Grady was singing every night in jazz clubs in Manhattan, backed by a band that included Michael Howell, a former guitarist for Dizzy Gillespie.

“When I said goodbye to my band that night, I didn’t know that I was not going to see them again,” she said. 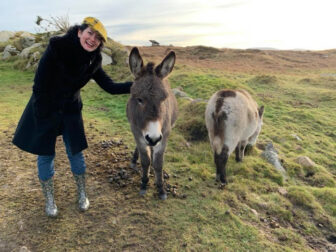 Within a week, said O’Grady, she was sick with a case of COVID-19 that left her feverish for 21 days. After sheltering in her Queens apartment for three months, she emerged to a dried-up music scene and a voice weakened by long-haul COVID, the term given to symptoms people experience for months or more after their infection has ended.

O’Grady decided to join the exodus from New York City. A friend suggested Beacon and, drawn to the mountains, river and the friendliness of residents, she moved to the city in August 2020.

That is where she launched, in February 2021, Butterflycoach.org, where she leads online wellness workshops, offers counseling and blogs about being positive.

“I figured, if I can’t be out singing and entertaining audiences, I might as well be inspiring them with positive vibes online,” said O’Grady.

She also decided to tweak something she had been doing before the pandemic — organizing group tours to coincide with her musical performances in France, Italy, Ireland and other countries in Europe.

A tour scheduled for Ireland in September will focus on wellness, not music, with activities like hiking, writing and painting. O’Grady is planning another for an olive farm in Tuscany in the spring of 2023.

“People now, they’re desperate to travel, they want to connect in a more meaningfully way,” she said. “This pandemic has shifted our perspective; it’s made us realize what’s really important.”

Have you made a pivot? Share your story in the comments below.