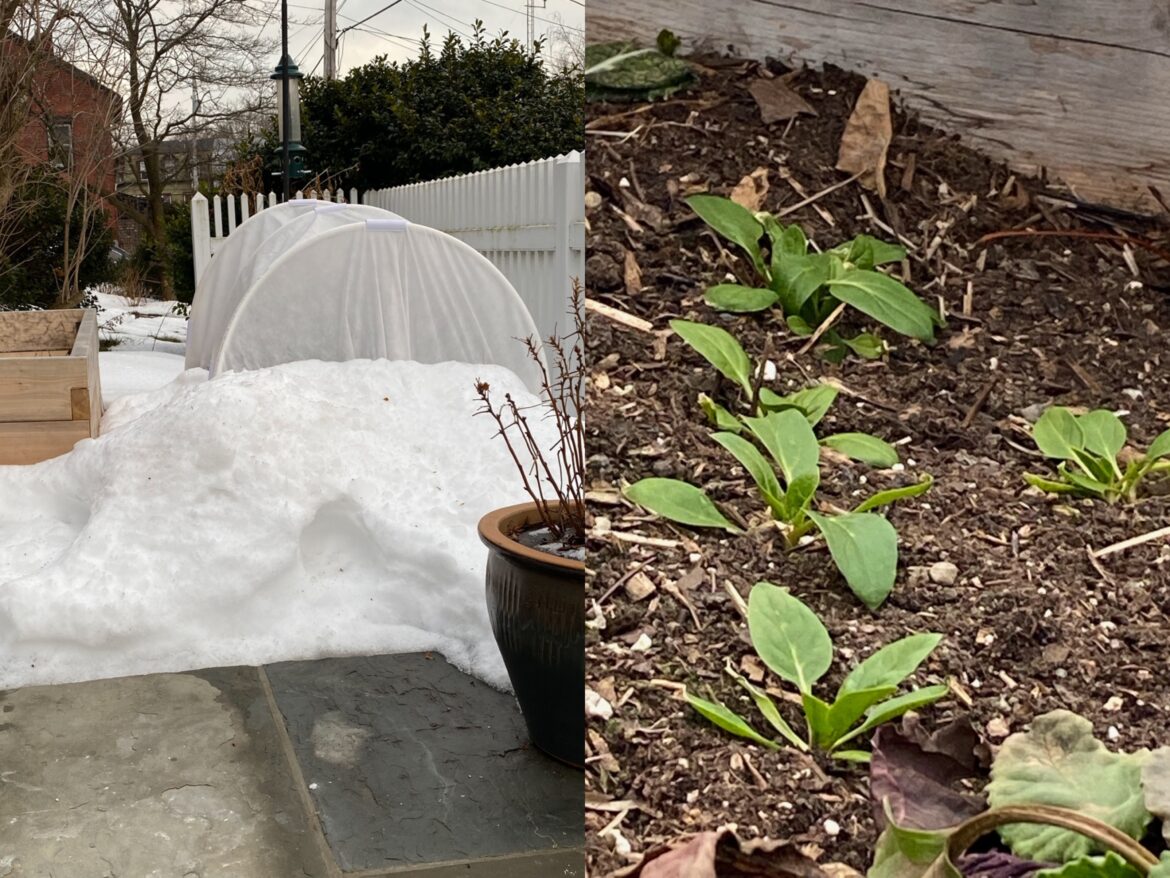 Although surrounded by snow, the bok choy is cozy inside. (Photos by Lauren Carrigan)

Gardeners are ready to go even as the snow and ice pile up.

“After you’ve ordered all the seeds, you’re ready to get your hands dirty and get moving,” says Seamus Carroll, who, with other members of the Philipstown Garden Club, gathered recently for winter sowing using milk jugs as mini-greenhouses.

Many trees, shrubs and perennials need to be exposed to cold, damp conditions in order for the seeds to germinate. It can be accomplished in many ways, the simplest being to sow the seeds outdoors in the fall.

The Garden Club members were sowing seeds of native perennials and pollinator favorites for their own gardens and for their annual plant sale.

“Planting in the jug makes it more confined and controllable,” Carroll explains. “The dome makes it warmer and accelerates seed growth. We place the jugs outdoors so the seeds are exposed to cold for several months.”

While tossing seeds onto the soil seems easier, weeds will pop up and it can be hard to identify which are desirable when plants are only a few inches tall. Weeding is also time-consuming and, as the soil is disturbed when the weed is pulled out of the ground, can pull seeds to the surface. It’s a long cycle when perennials can take a couple of seasons to reach their potential.

After the seedlings sprout, they can be thinned and transplanted to larger pots or into the soil. I learned about another method from A Way to Garden, Margaret Roach’s blog and podcast, when she interviewed the founder of the nonprofit Wild Seed Project, Heather McCargo.

McCargo described a method in which seeds are planted in 4-inch or 8-inch pots, watered well, and put outdoors with a frame of weighted hardware cloth to protect them from wildlife.

Instead of dividing the seedlings in late spring, McCargo recommended moving the clump to a larger pot and letting the plants grow until fall before dividing and transplanting into the ground. Her point was that native perennials grow slowly in the first season and dividing them early damages the roots. The fall transplant timeline gives them more root growth and the plants go dormant soon after. The Wild Seed Project website at wildseedproject.net has instructions for growing dozens of native trees, shrubs, perennials, grasses and ferns, as well as seeds to order.

Lauren Carrigan of Cold Spring is in her second winter of growing in raised beds with row covers to extend the season. When I spoke with her this week, she was happy to report that her bok choy was alive and well and ready to harvest. Even after the frigid temperatures and snow we’ve had, the row covers manage to stabilize the soil temperature for hardy greens.

Carrigan’s eagerness for an early start motivated her to find simple designs using PVC pipe to make tunnels in the winter of 2021. “I needed space to move the seedlings I had been growing indoors under lights and, by covering the raised beds, we were harvesting Swiss chard by April,” she said. When she ordered seeds this year, she looked for cold-hardy varieties that will thrive under the row covers.

Cold frames are another option for extending the growing season. They can be built on top of raised beds, placed directly on top of the soil, or dug into the ground. The basic construction relies on a transparent cover to let in sunlight and insulate the plants. Old windows and glass shower doors can have a second life in cold frames. Because it is a closed system without the airflow of a milk jug or permeable cloth cover, a cold frame needs to be opened on warmer days. Plants can overheat and humidity can build up without attention.

From least maintenance to most maintenance, there are many ways to grow food during the winter. As my paid work has become more intensive in spring, summer and fall, I’ve realized that winter vegetable gardening makes more sense because I have more time and attention. And as I’ve learned from year-round composting, the key is a close and convenient location. Trudging across the yard in snow or ice can be a big deterrent.