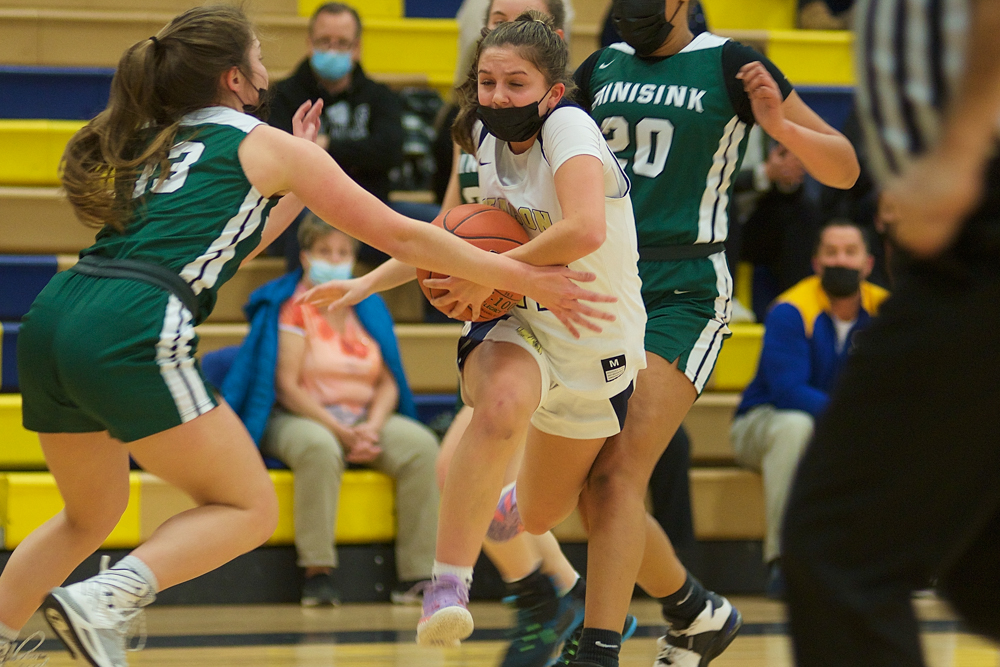 Reilly Landisi fights through a double-team on Wednesday in a home win over Minisink. (Photos by S. Pearlman)

After opening the season 1-1, Haldane had recorded 13 straight victories as of last week.

That streak came to an end on Monday (Jan. 31) at Bronxville, which defeated the Blue Devils, 63-45. It was Haldane’s first loss since Dec. 4.

Soren Holmbo had 17 points and Matteo Cervone and Tristen Reid each scored eight.

“Bronxville played phenomenal defense,” Coach Joe Virgadamo said. “They were more physical than us, and we had too many turnovers [22]. We were a step behind. It was a bit of a wake-up call for our guys. They were not happy about our streak being broken, but it was a great reflection on what we need to do to not be in that situation again.”

Haldane, ranked fifth in the state by the New York State Sportswriters Association among Class C teams, started a new streak on Wednesday (Feb. 2) at North Salem with a dominant game of its own that resulted in a 74-52 league victory.

“We brought good energy,” said Virgadamo. “The guys know playoff time is coming up, and they were still pretty mad about Monday night’s loss.”

Haldane (15-2, 5-0 league) is scheduled to visit Putnam Valley today (Feb. 4), host North Salem at 6:15 p.m. on Wednesday (Feb. 9) and visit Pawling on Thursday. For home games, Haldane has updated its COVID-19 policy and now allows visiting team spectators, although masks must be worn by everyone in the gym.

“We got off to a fast start and used that to fuel us the rest of the game,” said Coach Scott Timpano. “They got within four points late, but we maintained control. Joseph was huge for us — he scored 13 of his 15 points in the second half.”

Beacon (9-5) was scheduled to visit Minisink on Thursday (Feb. 3) and Monticello on Saturday. The Bulldogs return home on Monday (Feb. 7) for a 6 p.m. tip against Goshen.

Beacon — a team of all freshman and sophomores — turned in a strong performance on Wednesday (Feb. 2) at home, shooting well from long range early, and getting contributions from numerous sources (perhaps showing a glimpse of the team’s bright future), in a 45-29 victory over Minisink Valley. 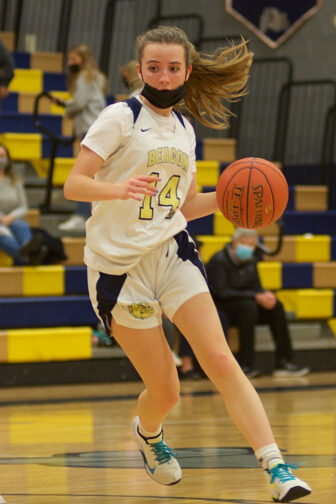 Beacon’s Rory Ladue looks for an opening against Minisink Valley.

“I was proud of the girls for getting a home win tonight, after dropping our last three games,” said Coach Christina Dahl. “It was a great team win, with six players scoring five or more points. We’re looking to carry the momentum forward, and go on a run.”

In a loss on Monday at Washingtonville, Rodriguez led the scoring with 13 points and Landisi had 11.

“We started off the game strong,” Dahl said. “We were hitting our shots and took a five-point lead into the second quarter. But in the second and third, we weren’t able to capitalize on easy opportunities, or at the free throw line.”

Beacon trailed by 15 going into the fourth, but managed to cut the deficit to five with “defensive pressure and timely shots by Daveya,” Dahl said. “Give credit to Washingtonville; they earned that victory.”

Beacon (7-7) is scheduled to visit Minisink Valley today (Feb. 4) and travel to Cornwall Central on Tuesday. 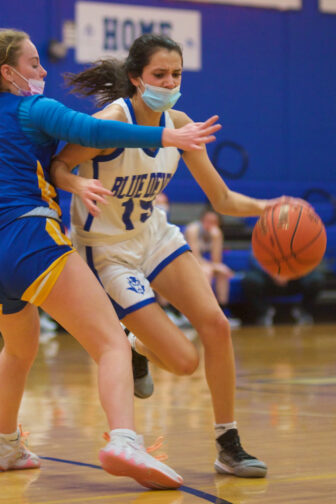 Maddie Chiera drives past a North Salem defender on Wednesday.

The Haldane girls had their chances against North Salem but the ball just wouldn’t drop. The visitors scored with 54 seconds left to break a tie on Wednesday (Feb. 2) at Haldane and the Blue Devils had an opportunity to tie it at the free throw line and from the field but couldn’t find the net in a 51-49 league loss.

“It was a very tough loss,” said Perrone. “Every time we play North Salem it’s close, and aggressive. We feel like they’re our biggest rival.”

The Blue Devils will get a chance for revenge on Thursday (Feb. 10) at North Salem.

On Monday (Jan. 31) at home, Haldane dropped a 59-38 decision to Pleasantville. Chiera led the Blue Devils with 11 points and six rebounds; Marisa Scanga had nine points and two steals; and Amanda Johanson chipped in with six points, three rebounds and three steals.

“Pleasantville is a good team, but I feel like we should’ve been more competitive,” Perrone said. “They got out to a big lead and we were chasing the whole game.” 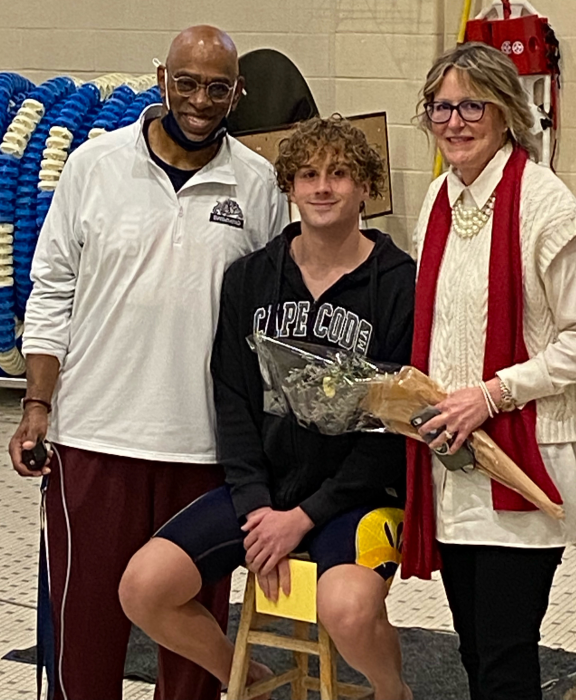 Registration has opened for Philipstown Little League spring baseball and softball for players in kindergarten to seventh grade, up to age 13, including winter clinics. The deadline is Feb. 25. See philipstownlittleleague.com.

Sander Miller, a former Cold Spring resident who is a senior at Edgemont High School, on Jan. 22 won the Westchester County wrestling title in the 145-pound weight class. As of Jan. 26, Miller had a season record of 26-3, with 22 wins by pin. He will wrestle next season for Columbia University.